As the new president and Congress prepare their policy agenda for 2017, the nonpartisan Congressional Budget Office (CBO) reports that America continues to face serious fiscal and budgetary challenges. CBO projects that, on our current path, deficits will reach $1 trillion by 2023 and total $9.4 trillion over the next ten years.

The nation’s budget deficit stems from a structural mismatch between revenues and spending. Over the next ten years, CBO projects that revenues will grow by $1.7 trillion, while spending will grow by $2.6 trillion, due primarily to increases in spending on mandatory programs and interest costs.

CBO warns that our structural fiscal imbalance puts our economy at risk over the long-term:

“Such high and rising debt would have significant consequences, both for the economy and for the federal budget. In particular:

CBO projects that the budget deficit will climb from $559 billion in 2017 to $1.4 trillion in 2027, resulting in a cumulative 10-year deficit of $9.4 trillion. Although deficits are projected to decline temporarily during the next two years, that decline stems “in large part because of shifts in the timing of some payments that affected outlays in 2016 and will do so again in 2017 and 2018,” according to CBO. The overall trend in the deficit is unmistakable — it rises sharply over the next decade. 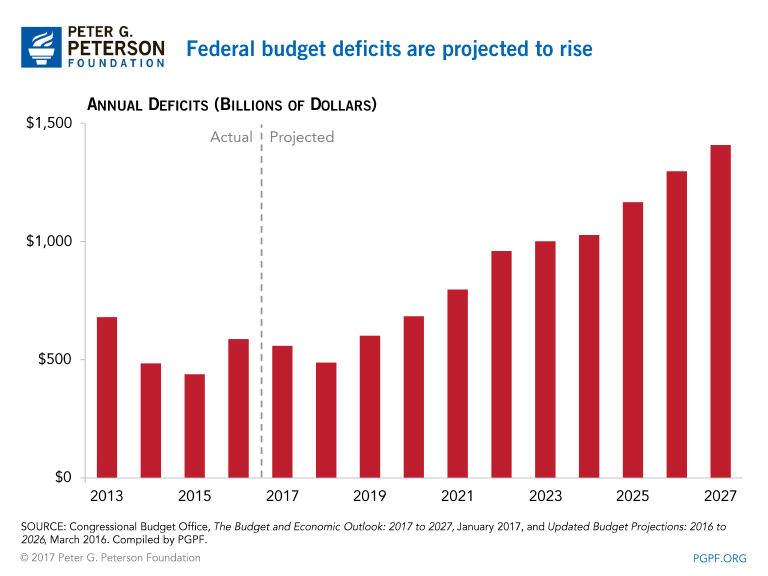 The rising deficits stem from a growing structural mismatch between the federal government’s spending and revenues. Over the next 10 years, CBO estimates that revenues will rise slightly from 17.8 percent of GDP in 2017 to 18.4 percent of GDP in 2027. Spending, however, is expected to rise significantly over the same period, increasing form 20.7 percent of GDP in 2017 to 23.4 percent in 2027. CBO projects that total federal spending will equal $52.5 trillion over the next 10 years, while total federal revenues will total only $43.1 trillion. Over the long term, this gap will continue to widen even further. 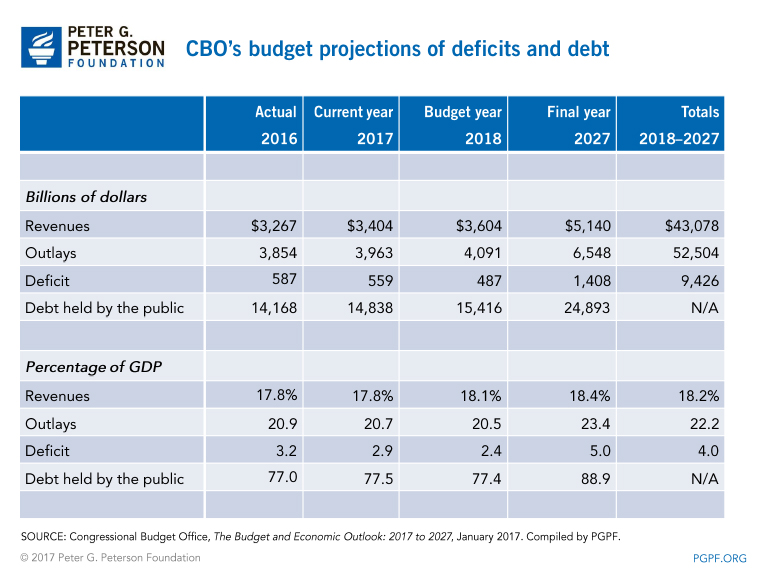 CBO projects that federal debt will climb to 89 percent of GDP in 2027. Historically, that is a very high level of debt. Since 1790, there have only been four years in which the debt was above 85 percent of GDP, and those were during and just after World War II. After the war, debt began to fall sharply as a share of GDP as the economy grew and some debt was paid down. Today, the budget outlook is much more worrisome because projections show a more permanent and dramatic increase in debt not because of war but because of growing spending on mandatory programs and interest, coupled with inadequate revenues. 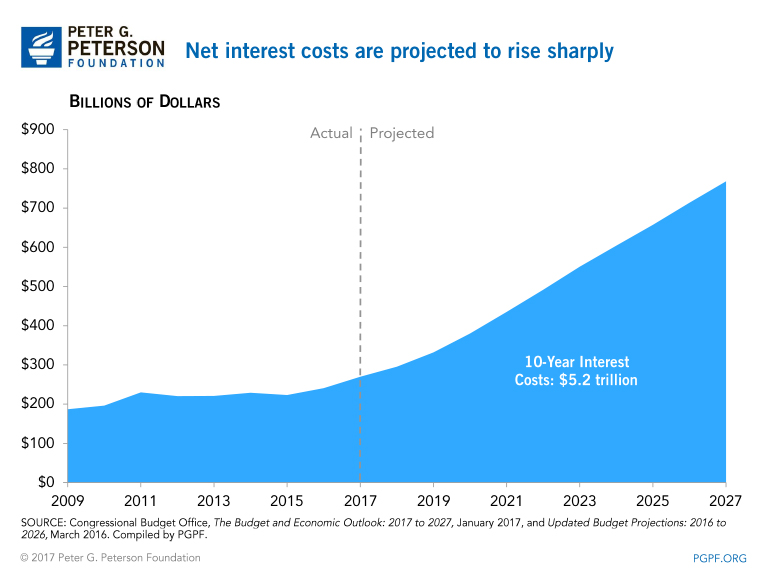 Mandatory spending is projected to climb in the coming years 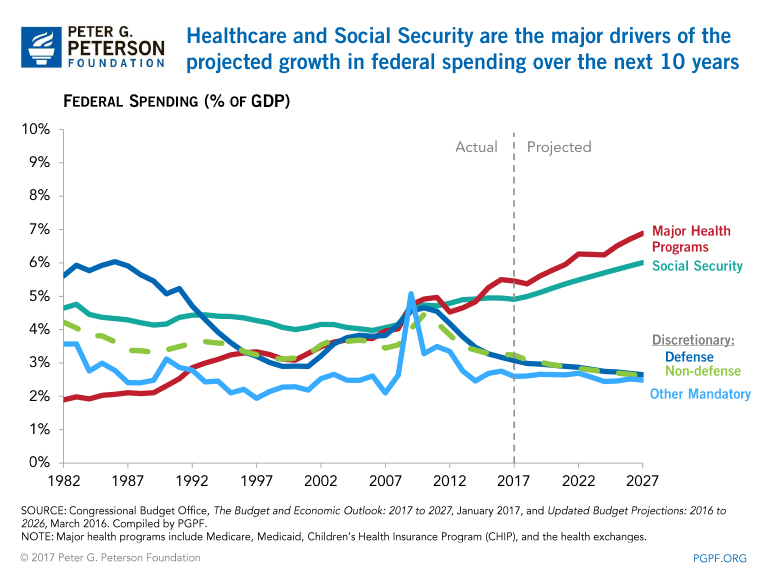 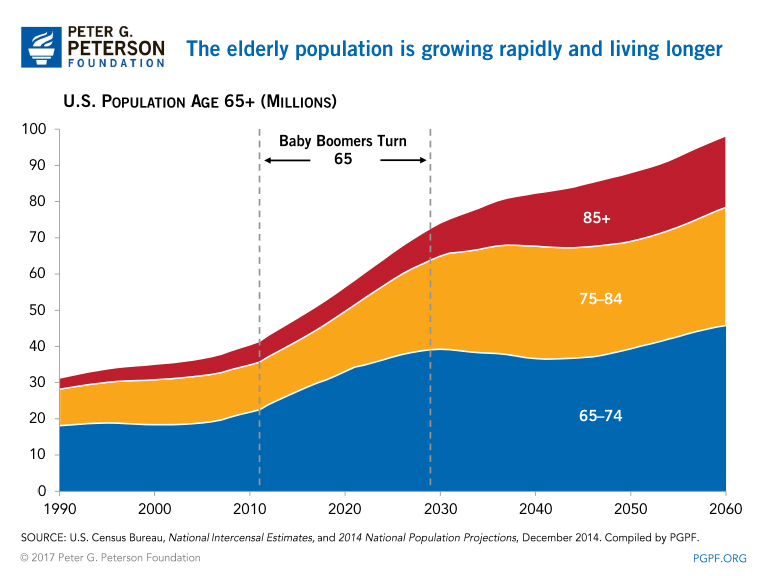 Discretionary spending is projected to decline 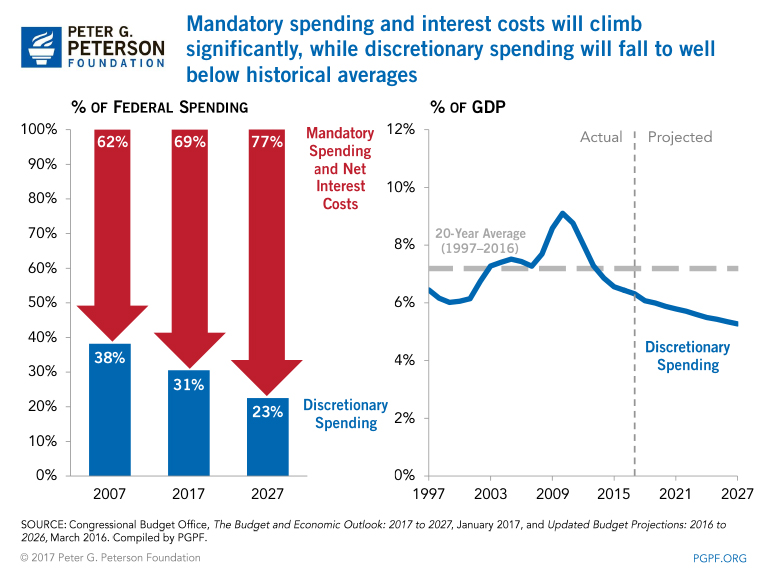 The time for policymakers to act is now

CBO’s recent report provides yet another stark warning that our nation’s fiscal outlook is unsustainable and dangerous. CBO warns that the unsustainable trajectory of our long-term debt threatens to restrain future economic growth. Over the long term, CBO projects that by 2047, debt held by the public will reach an unprecedented 145 percent of GDP. This growing debt reduces our ability to invest in the future, gives us less flexibility to respond to unexpected challenges, and increases the risk of a fiscal crisis. 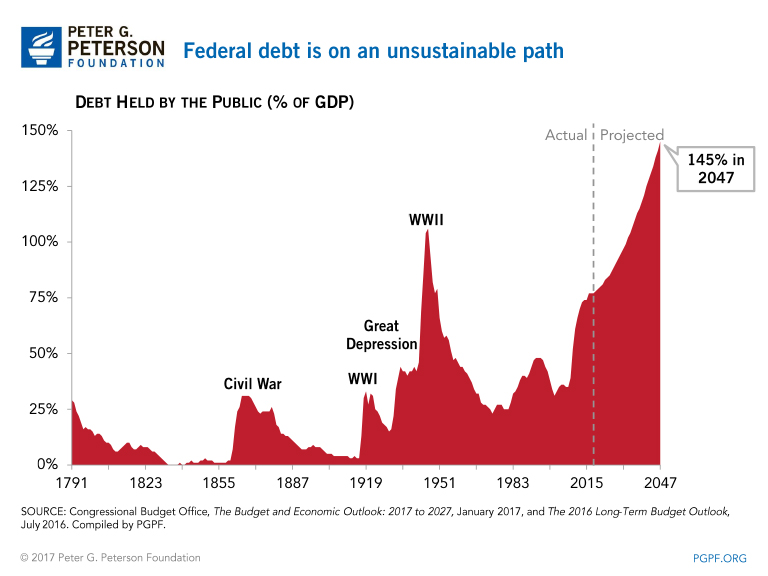 The new Administration and Congress have a range of proposals across a number of policy areas that they will consider. At the same time, they have an important opportunity to enact sensible reforms that put our fiscal trajectory on a sustainable path. To ensure that reforms will be durable, lawmakers should work together and across party lines to build a strong fiscal foundation for our economy and for future generations of Americans.

Read the Statement from the Peterson Foundation on CBO’s Budget and Economic Outlook.