We are former senior government officials who have served during eight Presidential administrations, Democratic and Republican, and former leaders in Congress from both parties. We join together now because we strongly believe that our long-term debt is the single greatest threat to our national security, and we urge elected leaders to agree by the end of this year on a plan that both averts the fiscal cliff and puts the debt on a downward path.

Our leaders should use the consensus against going over the fiscal cliff as an opportunity to agree now on a framework for significant fiscal reform in 2013. Another "kicking of the can" — the lowest common denominator of what both parties can currently accept, without any structural reforms that truly address the nation's problems — is not acceptable. We must reassure our own citizens and businesses, the international financial markets, and the greater global community that America will address its fundamental challenges and maintain its leadership role in the world.

At a minimum, the resolution of the fiscal cliff by the end of the year should have the following components:

In a time of division and drift, the true test for America is neither military nor economic — it is political. We ask our elected officials from both parties to assert genuine leadership, communicate to the American people what needs to be done, and make pragmatic policy decisions to power our nation’s economy, democracy, and role in the world. It will require courage, shared sacrifice and a willingness to compromise and make the tough choices essential to setting a new course for our nation. It summons the truest form of patriotism — putting our country first. 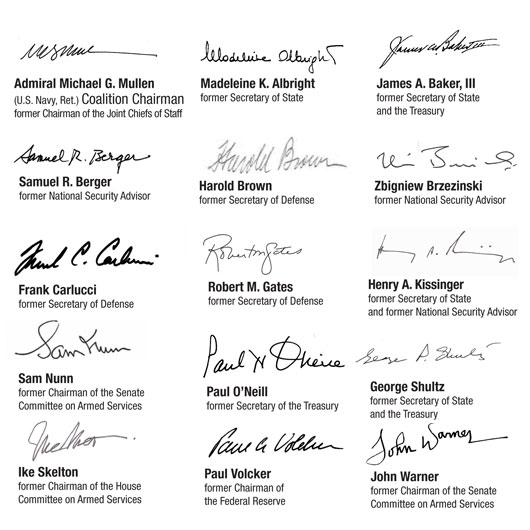