Defense spending by the United States increased by $22 billion from 2020 to 2021, according to recently released figures from the Stockholm International Peace Research Institute (SIPRI). That increase was outstripped by growth in spending from other countries, and as a result, the United States now spends more on defense than the next 9 countries combined (down from outspending the next 11 countries combined in 2020). That shift is in part due to a relatively larger increase in defense spending by China and the United Kingdom.

SIPRI’s definition of defense spending is broader than the definitions that are most frequently used in fiscal policy discussions in the United States, and according to their calculations, the United States spent $801 billion on national defense in 2021. SIPRI includes discretionary and mandatory outlays by the Department of Defense, Department of Energy, Department of State, and the National Intelligence Program. By contrast, the national defense budget function ($754 billion in 2021) excludes outlays by the Department of State and certain programs of the Department of Energy. Nonetheless, the SIPRI comparison provides useful insights on the sheer scale of U.S. defense spending relative to other nations.

Although the United States spends more on defense than any other country, the Congressional Budget Office projects that defense spending as a share of gross domestic product (GDP) will decline over the next 10 years — from 3.1 percent of GDP in 2022 to 2.7 percent in 2032. That is considerably lower than the 50-year average spending on defense of 4.3 percent of GDP.

Defense spending accounts for a sizable portion of the federal budget and the United States vastly outspends other nations. In determining the appropriate level of such spending in the future, it will be important to evaluate whether it is being used effectively and how it fits in with other national priorities.

How Much Does the Government Spend on International Affairs? 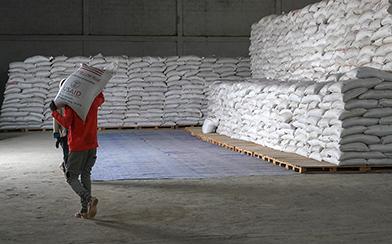 Federal spending for international affairs, which supports American diplomacy and development aid, is a small portion of the U.S. budget.