2015 Up To Us Nationwide Campus Competition: Highlights

Congratulations to the Stockton University team on winning the 2015 Up to Us competition! The Stockton students were recognized by Peterson Foundation President and CEO Michael A. Peterson, Net Impact CEO Liz Maw, and President Clinton at the CGI U annual meeting at the University of Miami in Coral Gables, FL:

"No great country can remain great if it spends all its money on today and yesterday and too little on tomorrow. You have to invest in tomorrow."
- Bill Clinton

Up to Us, a nationwide campus competition sponsored by the Peter G. Peterson Foundation, in partnership with the Clinton Global Initiative University and Net Impact, empowers students to raise awareness and engagement among their peers on America's long-term fiscal and economic challenges. Student teams across the country compete to design and run creative and impactful campaigns around the effects of rising debt on economic opportunity and investment in the future.

The 2015 Up to Us teams engaged over 18,000 students through in-person outreach, events, and activities on campus. These included seminars and discussions with elected officials, economists, and entrepreneurs; presentations on fiscal issues in hundreds of classrooms and student residences; civic engagement activities such as sending letters and postcards to state and local representatives; and creative events like debt bingo and life-size Monopoly games. Teams partnered with more than 230 other campus groups to support their campaigns, and gathered over 11,000 signatures to a pledge raising awareness of the long-term national debt and affirming the important role that the millennial generation can play in building a strong fiscal future for the country.

"If you want the maximum potential for every person who lives here and works here, we have to have a sustainable budget."
- Bill Clinton

On February 12th, the teams participated in My Two Cents Day, a first-of-its-kind national mobilization of college student around fiscal issues. On this day, 49 schools across the country held on-campus events at which thousands of their student peers shared photos and posts on social media giving their "two cents" on America's fiscal health and how it could affect their economic opportunities in the future.

The winner of this year’s competition is the team from Stockton University. These students were recognized by President Clinton at the CGI U annual meeting in March at the University of Miami in Coral Gables, FL, and were awarded a $10,000 cash prize. 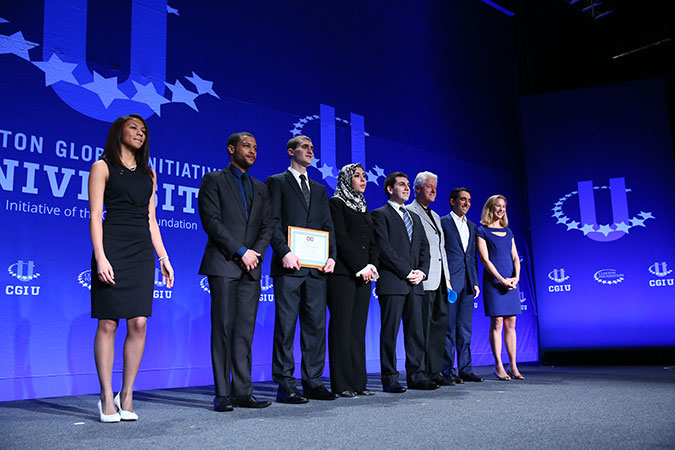 VIDEO HIGHLIGHTS FROM THE CAMPAIGNS

Thirty-five student teams from the following universities participated in the 2015 Up to Us competition: