PGPF Citizen’s Guide: We can curb our growing deficit 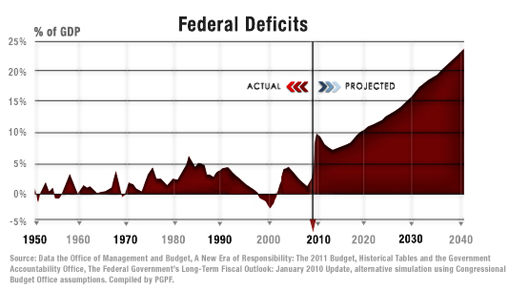 With escalating deficits, mounting levels of public debt, growing unfunded promises for large individual entitlement programs, and increasing reliance on foreign lenders U.S. citizens should be very concerned about the deteriorating financial condition of our nation.

Last year, the U.S. deficit of $1.4 trillion or 9.9 percent of gross domestic product (GDP), was the largest since the end of World War II. By the end of this year the estimated deficit will again reach $1.4 trillion. Our current national debt is $12.9 trillion, or nearly 90 percent of GDP. Of this debt, the amount held by the public (i.e., by individuals, corporations, state or local governments, and foreign entities) is over $8 trillion, or 57 percent of GDP. Even adjusting for inflation, both of these numbers are more than double their size from just 10 years ago.

The deficits for fiscal years 2009 and 2010 are largely attributable to significant declines in revenue due to a recession and weak economy, the cost of the wars in Iraq and Afghanistan, and various government bailouts and stimulus actions. These items do not represent long-term and recurring fiscal challenges. However, even after the economy recovers, the special federal interventions are complete, the wars are over, and unemployment levels are down, deficits and debt are expected to grow at a rapid rate. As a result, the U.S. will find itself in an unsustainable fiscal position in the years to come. If current policies are left unchanged, debt held by the public is projected to spike even further, reaching over 300 percent of GDP in 2040 (see Chart).