Analysis: The President’s FY 2019 Budget Fails to Put Us on Responsible Fiscal Path

Earlier this month, President Trump released his second budget, outlining the Administration’s policy proposals, budgetary projections, and economic forecast for the next decade. The President’s budget reflects a dramatically worse fiscal outlook than last year’s version released just nine months ago. This is due primarily to the fiscally irresponsible tax legislation signed in December. Moreover, the budget continues to rely on unrealistic assumptions, including spending cuts that are highly unlikely to pass and optimistic projections of economic growth that significantly exceed those of most other economists. In fact, just days prior to the release of this budget, the President signed a spending bill that increased spending to well above the levels in his own budget. To our knowledge, this is the first time that a President overspent significantly above his budget even before it was released.

While the budget does not lay out a path to a sustainable fiscal outlook, it does reduce future deficits by the Administration’s calculations and generates a small decline in federal debt relative to the size of the economy. Under the President’s FY2019 budget:

The President’s budget would reduce the annual deficit to 1.1 percent of GDP in 2028 — significantly below the 4.4 percent of GDP estimated for this year. However, much of that reduction relies on an assumption that real (inflation-adjusted) GDP will average nearly 3 percent growth annually over the next 10 years. It is also predicated on a reduction in non-defense discretionary spending of nearly $2 trillion through 2028; earlier this month, though, the caps on such spending were raised by $65 billion for 2019 (that increase is not reflected in the budget since it happened shortly before the release of the document). If those assumptions do not materialize, annual budget deficits would be much higher than the administration projects over the next 10 years, and lead to a significantly higher level of debt.

Last year’s Administration budget anticipated a budget surplus of 0.1 percent of GDP in 2027, while this year’s version anticipates a deficit of 1.4 percent of GDP. Much of this variation stems from the unpaid-for tax cuts enacted in December 2017. The Administration assumes that the reduction in tax rates on individuals and corporations and other provisions enacted in that legislation will continue through the 10-year budget period; those effects — along with the interest payments on additional debt accrued — will increase deficits throughout that period. 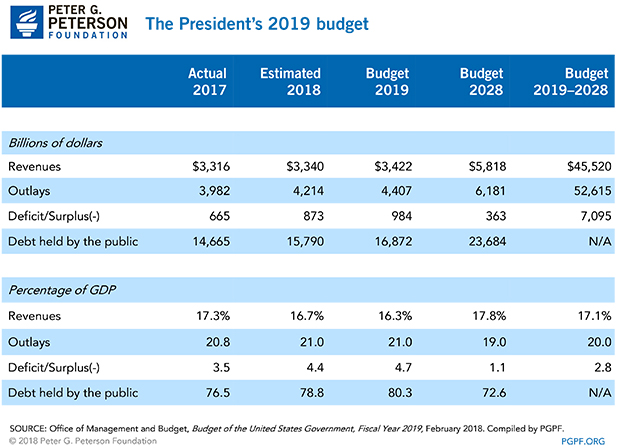 The President’s budget anticipates that revenues will grow from $3.3 trillion in 2018 to $5.8 trillion in 2028, approximately $250 billion lower than what is projected under current law. The only major policy proposal affecting revenues is that the administration would extend provisions of the recently enacted Tax Cuts and Jobs Act that are slated to expire in December 2025, which decreases the amount of revenues that would be collected during 2026 to 2028. 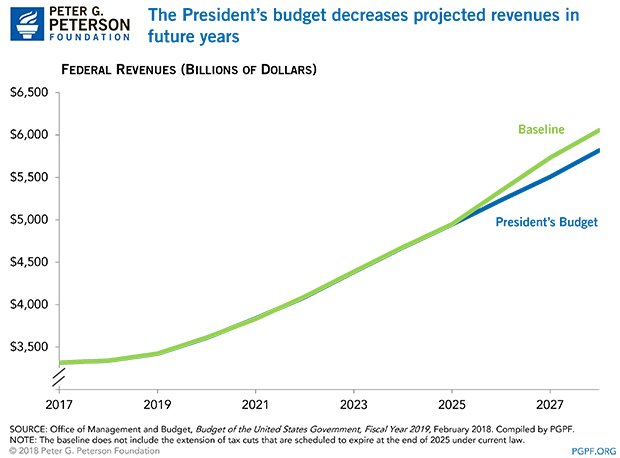 Over the next 10 years, spending under the President’s budget is projected to be $3.7 trillion less than under the Administration’s baseline. More than half of the reductions stem from spending cuts to non-defense discretionary programs, while another significant portion of the cuts (nearly 15%) come from Medicare. Defense spending would be increased by $270 billion over 10 years. 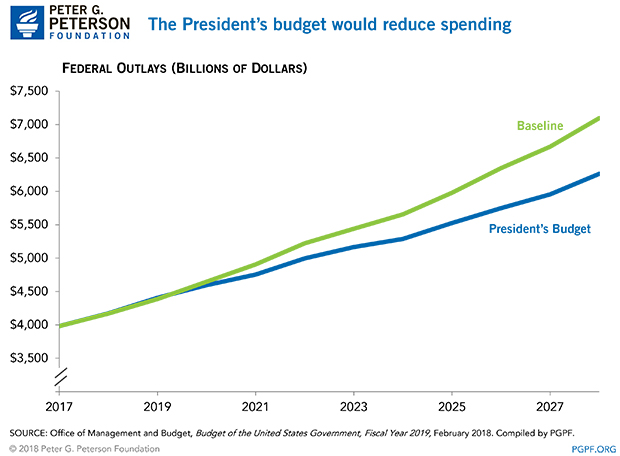 Under the President’s budget, mandatory spending would be reduced by $1.7 trillion over 10 years. The reductions will affect a wide range of programs for low- and middle-income families. The largest mandatory spending cut in the budget involves repealing and replacing the Affordable Care Act, which would reduce outlays by $675 billion over 10 years. Reforms to income support programs, such as the Supplemental Nutrition Assistance Program and Temporary Assistance for Needy Families, account for a total of $263 billion in cuts between 2019 and 2028. Changes to federal student loans would reduce outlays by $203 billion. Furthermore, a proposal to eliminate wasteful spending and improve the drug pricing and payment policies of Medicare would account for an additional $236 billion reduction in spending over 10 years.

Discretionary spending would be significantly reduced

The President’s budget recommends cutting non-defense discretionary spending by $1.9 trillion over the next 10 years. Non-defense discretionary programs fund a variety of government activities including scientific and medical research, education, infrastructure, national parks, law enforcement, grants to state and local governments, and pay for federal workers. The areas with the largest cuts from 2019 through 2028 are: international affairs ($321 billion between 2019 and 2028); community and regional development ($210 billion); and education, training, employment, and social services ($196 billion). Meanwhile, defense discretionary spending would be increased by $270 billion over the 10-year period. This reflects a major increase in base defense spending, partially offset by an anticipated decrease in war funding (known as overseas contingency operations). 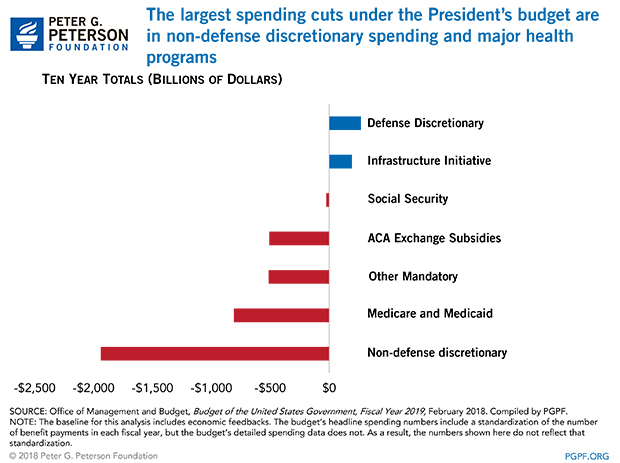 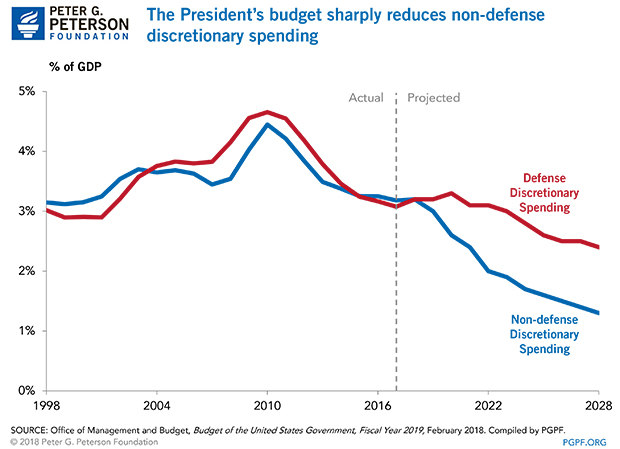 The President's budget demonstrates the need for further discussion about our fiscal policies and future economy. Even with optimistic assumptions about economic growth and spending cuts, debt as a percentage of GDP would remain near its current level, which is close to the highest it has been since 1950.

Unfortunately, instead of taking action to improve our fiscal outlook, lawmakers have added trillions of dollars in new deficits in just the last few months. Last year’s tax bill and this month’s budget deal not only exacerbate an already unsustainable debt outlook, they represent an unnecessary and inadvisable fiscal stimulus during a period of economic expansion and low unemployment. Increasing deficits will harm our economy and reduce our flexibility to deal with future crises. However, the opposite is also true – by getting our fiscal house in order we can create the conditions that encourage economic growth, enhance business and consumer confidence, and build a prosperous future.