Today, the Federal Reserve announced a 0.50 percentage point increase in the target for the federal funds rate — the interest rate at which commercial banks lend to one another overnight. That increase is meant to help tame rising inflation, which is currently much higher than the central bank’s target of 2 percent; however, the increase also has implications for the federal government’s borrowing costs and therefore the nation’s fiscal picture.

The Fed’s move will set the target range for the federal funds rate to between 0.75 and 1.00 percent. It reflects the second time the central bank has raised rates this year after holding them close to zero since the onset of the pandemic. The federal funds rate is the benchmark for Treasury bills and other short-term securities. Adjusting the rate is an important tool for the Federal Reserve to help achieve their statutory mandate, which is to promote the goals of maximum employment, stable prices, and moderate long-term interest rates. Expectations about the short-term rates, combined with other factors, may also affect longer-term rates that are applied to business investment loans and consumer borrowing such as mortgages and car loans.

However, as interest rates on U.S. Treasury securities rise, so too will the federal government’s borrowing costs. The United States was able to borrow cheaply to respond to the pandemic because interest rates were historically low. However, as the Federal Reserve increases the federal funds rate, short-term rates on Treasury securities will rise as well — making some federal borrowing more expensive. Expectations about short-term rates and inflation have already pushed up longer-term rates as well.

Last year, the Congressional Budget Office (CBO) projected that annual net interest costs would nearly triple over the 2022 – 2031 period, soaring from $306 billion to $910 billion and totaling $5.4 trillion over that period. However, inflation has been much higher than CBO’s projections and the Fed is raising interest rates earlier than the agency projected last year, so such costs may rise even faster than anticipated. For example, interest costs in 2021 were around $20 billion higher than the agency projected last year, and such costs through the first six months of this fiscal year have outpaced the same period a year ago by $42 billion.

The growth in interest costs presents a significant challenge in the long-term as well. According to CBO’s latest projections, interest payments would total around $60 trillion over the next 30 years and would take up nearly one-half of all federal revenues by 2050. Interest costs would also become the largest “program” over the next few decades — surpassing all discretionary spending in 2043, Medicare in 2043, and Social Security in 2045.

Ballooning interest costs threaten to crowd out important public investments that can fuel economic growth in the future. In their most recent long-term budget report, CBO estimates that by 2051, interest costs are projected to be more than three times what the federal government has historically spent on R&D, nondefense infrastructure, and education, combined.

The long-term fiscal challenges facing the United States are serious. Significant borrowing was necessary to respond to the COVID-19 pandemic; however, the structural imbalance between spending and revenues that existed before the pandemic is still large and will grow rapidly in the future. Furthermore, as interest rates rise and the nation’s debt grows, it will become even more expensive to borrow in the future. Congresses and Presidents of both parties, over many years, have avoided making hard choices about our budget and failed to put it on a sustainable path. It is vital for lawmakers to take action on the growing debt to ensure a stable economic future. 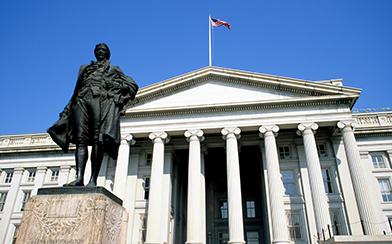 As the United States borrows a significant amount of money to respond to the COVID-19 pandemic, let’s take a closer look at a few key characteristics of Treasury borrowing that can affect its budgetary cost.