On March 21, 2011, the Government Accountability Office (GAO) released its latest update to The Federal Government’s Long-Term Fiscal Outlook. Relative to the GAO’s last update of their long-term simulation, the nation’s fiscal condition has deteriorated. This can be attributed to the slower pace of recovery following the recession. Although it is highly unlikely that lawmakers would allow the budget to develop as the simulations suggest, the report provides important insights on the nation’s budget outlook over the next 75 years under alternate sets of assumptions about current policies and underlying factors affecting federal programs (1).Under any set of assumptions, the report finds that the current fiscal situation is unsustainable.

The report highlights the major role that the growth in health care spending plays in the long-term budget outlook:

Although the future outlook for the budget is uncertain, the GAO’s analysis makes one point clear: our nation’s fiscal problems are large. To address those problems, policymakers will need to develop a credible plan to reduce the deficit gradually over time as the economy recovers. Waiting too long to put the budget on a sustainable track will raise the costs of addressing our nation’s fiscal challenges.

THE SIZE OF THE FISCAL PROBLEM

The GAO provides simulations based on an extension of the Congressional Budget Office’s January Budget and Economic Outlook baseline (the Extended Baseline), which assumes continuation of current law, and an Alternative scenario, which, given the past actions of the Congress and the President, assumes that certain laws will be changed. Those include:

While the Extended Baseline scenario is more optimistic than the Alternative scenario, large and persistent deficits still lead to an unsustainable growth in debt held by the public and a steady growth in net interest payments to service this growing debt. As the GAO notes in their analysis of the Extended Baseline scenario, by 2030 the growth in net interest payments and the growing cost of entitlements lead to a situation in which little room is left in the budget for all other spending. In the GAO model, “all other spending” is a catch-all category that includes what most people generally think of as government services such as national security, infrastructure, education, and the smaller entitlement programs. 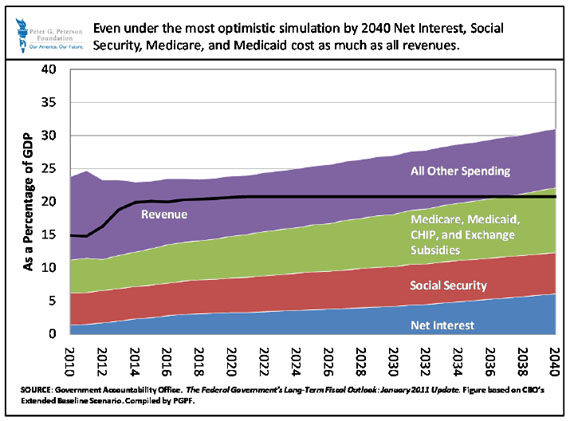 Under the Alternative scenario, some of the cost control measures in the Affordable Care Act are not sustained in the long term, which causes the growth of spending for Medicare, Medicaid, CHIP, and health insurance exchange subsidies to return to an unsustainable path after 2020. Medicare and Medicaid, Social Security, and net interest payments alone outstrip revenue by 2024. By 2036 spending on Medicare, Medicaid, CHIP, and the exchange subsidies is greater than spending for the “All Other Spending” category. 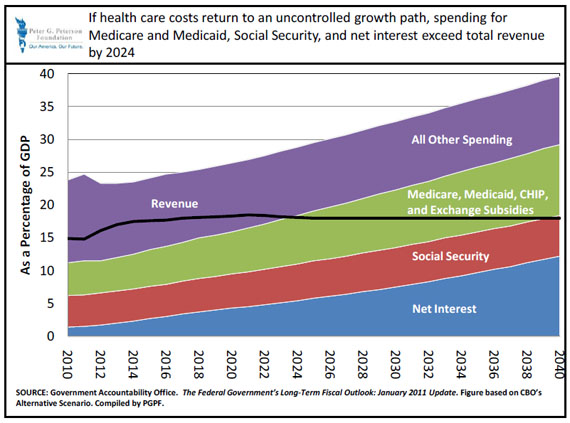 In both the Extended Baseline and Alternative scenarios, the imbalance between spending and revenues leads to large sustained deficits. Deficits decline in the short-term as the economy recovers, but begin to climb again as the cost of providing entitlements and the net interest on the public debt mount. In the Extended Baseline scenario, deficits once again eclipse $1 trillion by 2027. If the more pessimistic assumptions of the Alternative scenario hold, this mark may be passed as soon as 2017. 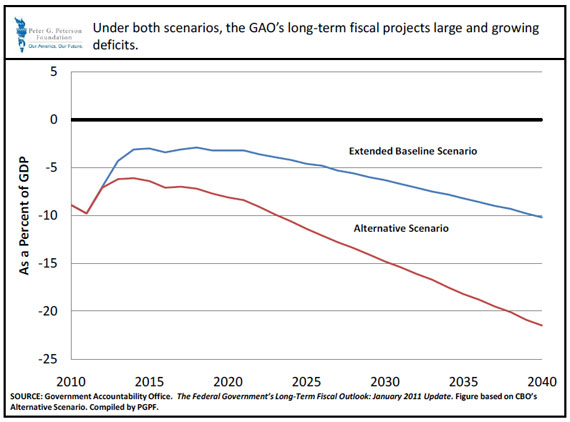 The outcome of these persistent deficits is a sustained growth in federal debt held by the public. Under both scenarios, debt held by the public is on a path to far exceed historically high levels in the medium term. Some economists believe that there is a link between high levels of public debt and sluggish economic growth. Economists Kenneth Rogoff and Carmen Reinhardt conducted research on the experience of several countries that 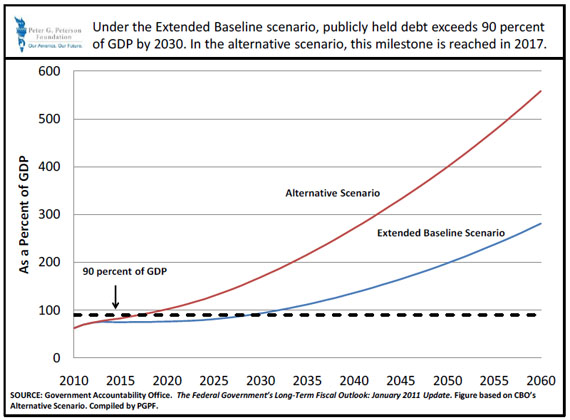 To be sure, the GAO is not recommending that the Congress enact large policy changes that cut the deficit immediately. Given the current fragility of the economy, raising taxes or cutting spending too much or too soon could undermine economic growth. However, the GAO’s analysis also shows that waiting too long to take action on the budget also raises costs. Under the optimistic scenario, waiting to act until 2021 would increase the size of the tax hike needed to stabilize the debt by 17 percent.

While the GAO simulations are an illustrative exercise, it is clear that the current fiscal situation is unsustainable. Even if the cost control measures contained in the Affordable Care Act are fully implemented and sustainable over the long term, there is a significant imbalance between revenues and spending. It is also clear that to avoid disruptive policy changes, policymakers should adopt a credible plan to cut the deficit. To avoid negative outcomes for economic growth, these policy changes should be phased in slowly.

The Government Accountability Office is an independent, nonpartisan agency that works for Congress. Often called the "congressional watchdog," the GAO investigates how the federal government spends taxpayer dollars. The GAO has published long-term fiscal simulations since 1992.