CAP Shows What it Might Take to Balance the Budget

The Center for American Progress (CAP) report A Thousand Cuts presents various options of spending cuts to reach primary balance of the federal budget by 2015. Primary balance occurs when federal revenues equal government spending, excluding interest payments on the debt. According to the report, reaching primary balance would require a reduction of $255 billion in the projected deficit in 2015. For this analysis, tax expenditures are effectively treated as “tax spending.” The authors, Michael Ettlinger and Michael Linden, acknowledge the fact that “there is little argument that the budget deficits projected for the years ahead are unsustainable.”

The report aims to demonstrate the breadth and severity of the cuts required if the budget were to be balanced largely through spending cuts, assuming that major entitlement programs like Social Security, Medicare and Medicaid are “left off the table.” (While this report does not focus on longer-range fiscal challenges, CAP recognizes the need to address the structural deficits arising from an aging population and growing health care costs. CAP provides a more detailed discussion of the longer-term challenges in their previous report, A Path to Balance: A Strategy for Realigning the Federal Budget.)

“A Thousand Cuts” shows that tackling the fiscal challenge will require difficult tradeoffs. However, by excluding the major entitlement programs, the report has to make much deeper cuts to defense, other discretionary and mandatory programs, and tax expenditures. As Figure 1 below shows, the exempted programs are major components of government spending. 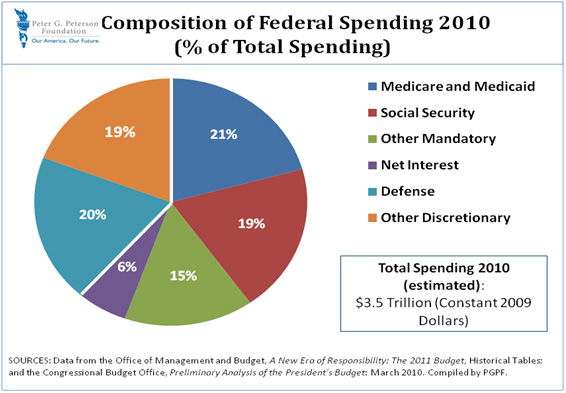 The report uses the President’s FY 2011 budget as its baseline, with adjustments to reflect the recently enacted health care reform. The President’s budget includes the following assumptions: the Bush tax cuts are extended for households earning over $250,000; the estate tax is maintained at 2009 levels; the Alternative Minimum Tax (AMT) is indexed for inflation; and a placeholder of $50 billion a year for military activity in Iraq and Afghanistan. These assumptions do not reflect current law, but is based on policies that the Administration believes are highly likely to take effect.

Each set of options includes mandatory, defense, and nondefense discretionary cuts. All except the final option include tax expenditure cuts. Figure 2 shows the breakdown of the spending cuts under each proposed option. As illustrated, the cuts to discretionary spending rise as the size of overall cuts rise. Other the other hand, cuts to mandatory spending rises to a lesser extent. Defense spending makes up the largest chunk of cuts in every option.

Figure 2. Various Levels of Spending Cuts to Balance the Budget by 2015 (Percentages refer to size relative to each scenario) 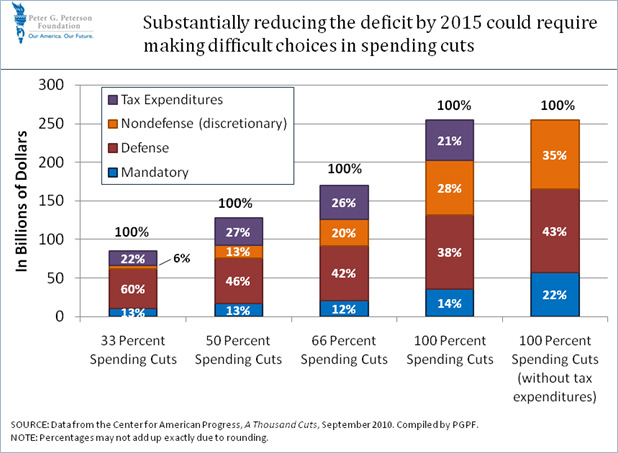 2. “Half Spending Plan” - $128 billion in spending cuts Mandatory: Additional reductions, including 30 percent cut to the Universal Service Fund. Defense: Additional cuts include changes to military health program, saving another $8.5 billion. Other Discretionary: Programs from the previous option are cut by larger amounts, up to 25 percent. The Bureau of Land Management is cut 33 percent. NASA is cut 3 percent. Tax Expenditures: Responsible for 28 percent of savings. Measures include getting rid of the exclusion of interest on private purpose bonds.

4. “All Spending Plan” - $255 billion in spending cuts Mandatory: Agriculture subsidies are cut 75 percent. Social Security included for the first time (indexing the COLA to an alternative measure of inflation). Defense: Includes a full rollback of the size of U.S. ground forces, and a large cut in the number of deployed strategic nuclear weapons. Other Discretionary: Greater cuts; Federal Highway Administration is cut 40 percent, and federal aid to the District of Columbia is cut 50 percent. A general 2.5 percent reduction to all programs not otherwise cut. Tax expenditures: Includes $50 billion in cuts, including the exemption for empowerment zones and renewal communities.

The choices needed to deal with the nation’s fiscal challenges are indeed tough. The CAP report proposes various spending cuts to mandatory, defense and other discretionary programs, and tax expenditures, some of which would be quite significant and painful. Mandatory spending undergoes the smallest cuts. Because Social Security and Medicare are essential for meeting the retirement and health needs of many Americans, CAP has deliberately excluded them from cuts. Of the various levels of spending cuts presented, only the most severe option -- 100 percent spending -- includes Social Security. This scenario still does not suggest other widely proposed options such as gradually raising the retirement age or increasing the payroll tax wage cap that would help to stabilize Social Security’s finances over the long-term.

All of the scenarios presented include eliminating or scaling back tax expenditures. However, the options chosen represent a small portion of all tax expenditures, which add up to roughly $1 trillion of lost revenues each year. Even in the scenario, which relies on 100 percent spending cuts, total savings from tax expenditures amount to only $50 billion. There are many tax expenditures that are more sizeable than the ones proposed in this report. For example, the exclusion of employer provided health insurance from taxable income costs $262 billion each year, and the deduction for capital gains income costs $45 billion annually. As shown in Figure 3, the five largest individual tax expenditures alone cost the government more than Medicare in 2010.

Other larger corporate tax expenditures were also not included in the potential cuts. For example, the deferral of income from controlled foreign corporations costs $31 billion a year.

Figure 3. Size of the five largest tax expenditures in 2010 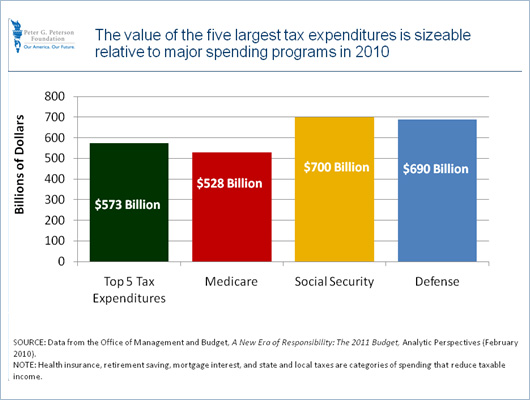 By excluding so much of the budget from cuts, the report is forced to make steeper cuts in defense and other discretionary spending areas. While these cuts address our growing deficits in the medium-term, we are still faced with a long-term fiscal imbalance, primarily due to demographic changes and rising health care costs. If reforms were made to other causes of structural deficits in the future, including large tax expenditures, more federal money could be used towards discretionary programs in education, infrastructure and research and development, which contribute to future economic growth.

Solving our large fiscal gap through cutting spending options alone, the 100 percent spending scenario shows, can significantly constrain government programs. Substantially reducing the deficit in 2015 will require making tough choices in spending cuts, but the report demonstrates that some form of revenue increases will also be needed.