An analysis by the Government Accountability Office (GAO), “Raising the Retirement Ages Would Have Implications for Older Workers and SSA Disability Rolls” underscores the difficult policy tradeoffs that legislators will face while ensuring the program’s long-term sustainability and protecting the most vulnerable program beneficiaries. While proposals to raise the retirement age are intended to improve the financial health of the Social Security program, GAO finds that such changes could produce an opposite result, while also having an adverse impact on some of society’s most vulnerable members. GAO warns that as the retirement age increases, more workers will attempt to claim disability benefits, rather than delaying retirement or claiming a reduced early retirement benefit. This will place additional strain on the Disability Insurance Trust Fund.

The report examines the effects of proposals that increase the Earliest Eligibility Age (EEA) and the Full Retirement Age (FRA). The FRA is the age at which a beneficiary can claim 100 percent of their scheduled Social Security benefit. The EEA is the earliest age that a worker can retire and begin collecting Social Security retirement benefits. Under current law EEA is 62 years of age. If a retiree begins collecting Social Security benefits at the EEA, his or her benefits are “actuarially adjusted.” That means that annual benefits are reduced so that there is no difference in expected lifetime benefits for a beneficiary who retires at the EEA or the FRA. Reforms to Social Security in 1983 gradually raised the FRA from age 65 to age 67 for people born after 1959.

The GAO analysis looks at three issues related to proposals to increase the retirement age: the potential impact on older workers who may be unable to work longer; the potential increase in demand for disability insurance and other benefits; and the resulting impacts on the financial condition of Social Security.

Social Security, which was established in 1935, collects money through payroll taxes from today’s workers, and uses it to pay benefits to today’s retirees. As a result of the deep economic recession and high levels of unemployment, Social Security is temporarily facing a cash flow deficit— the program’s expenditures in 2010 are expected to total $714.6 billion and the program’s revenue is expected to be $673.1 billion. The deficit should disappear once the economy recovers. However, according to official projections, the program will face permanent deficits beginning in 2015, and the gap between the cost of providing benefits and the amount of payroll taxes that the program takes in is projected to grow wider and wider.

Social Security’s financing crisis is driven by changing demographics
Social Security’s shortfall is driven by a decreasing ratio of covered workers to current beneficiaries. This is the result of a declining fertility rate and an increasing life expectancy. (For a more complete discussion of the financial shortfall please see PGPF’s analysis of the 2010 Social Security Trustees report here.)

By 2050, people age 65 or older will account for more than 20 percent of the population; this is nearly 7 percentage points higher than 2000 levels. But the demographic math is even more challenging when older workers are considered. Almost one-third of people between the ages of 55-64 who are not in the workforce cite chronic illness as the main reason. Over 40 percent of retirees leave the workforce earlier than planned as a result of health issues. 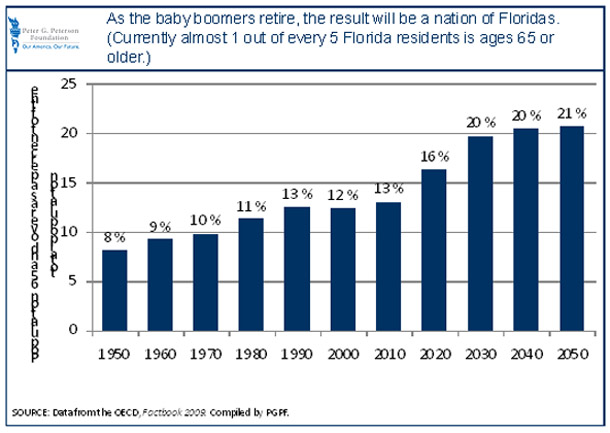 According to GAO, able-bodied workers could benefit from a higher retirement age if they save more and earn higher Social Security benefits. The GAO analysis finds, however, that increasing the retirement age could have a disproportionately severe impact on older workers and workers who could not continue in the workforce due to chronic illness. GAO examines various demographic trends that show how certain groups are affected by raising the retirement age.

Balancing sustainability and retirement security
GAO’s study was released ahead of the release of the report from the National Commission on Fiscal Responsibility and Reform (available here). The Commission’s plan would index both the full and early retirement ages to increases in life expectancy. As a result, the full retirement age would reach 68 in about 2050, and 69 in about 2075.The plan would allow workers with health limitations to receive special considerations that would help soften the impact of the higher full retirement age. The plan would also enhance the benefits of those over the age of 85 who may have outlived other sources of retirement income.

There are many challenges in balancing Social Security reform and ensuring retirement security for the most vulnerable Americans, but there is also a high price for inaction. In a recent report, the nonpartisan Congressional Budget Office (CBO) analyzed a number of policy options that have been considered to make Social Security sustainable in the long run. CBO’s analysis is available here. In this report, CBO analyzed an option that would decrease initial retirement benefits. The report illustrated how much delaying reform would cost through the creation of different time lines in the analysis of the option. to. In one scenario, a flat 15 percent reduction in benefits paid to new beneficiaries beginning in 2017 was shown to allow the program to pay benefits until 2076. If reform was delayed until 2027, a 15 percent benefit reduction would keep the program afloat until 2044, while a 20 percent benefit reduction would be required to preserve benefit payments through the full 2076 horizon. Clearly, making changes to Social Security to ensure long-term financially sustainability will require tough choices, but delaying action will require larger changes and cause more disruptions. Implementing changes now will afford those approaching retirement with more time to plan.