After months of negotiations, with default looming, Congress passed and the President signed the Budget Control Act of 2011 (BCA), which raises the debt ceiling and puts a process in place for reducing the deficit. Through various provisions, the BCA will lower the deficit by an amount that roughly corresponds to the increase in the debt limit by doing the following:

Despite these reductions in the projected deficits, lawmakers’ work is far from done. The BCA established enforcement procedures but does not make many of the hard policy choices, unlike the Simpson-Bowles Commission, the “Gang of Six,” and other comprehensive budget proposals.

Absent making these policy changes, the United States continues to face a serious long-term budgetary challenge that will get much worse in the years beyond 2021. Baby boomers are retiring and health care costs will continue to grow at rapid rates. Unless spending is controlled, taxes are raised or both, pressures within the budget will continue to build, pushing federal debt to unsustainable levels that threaten to undermine our economy. Elected officials need to continue serious discussions about federal entitlement programs and the tax system in order to address this “structural deficit”. 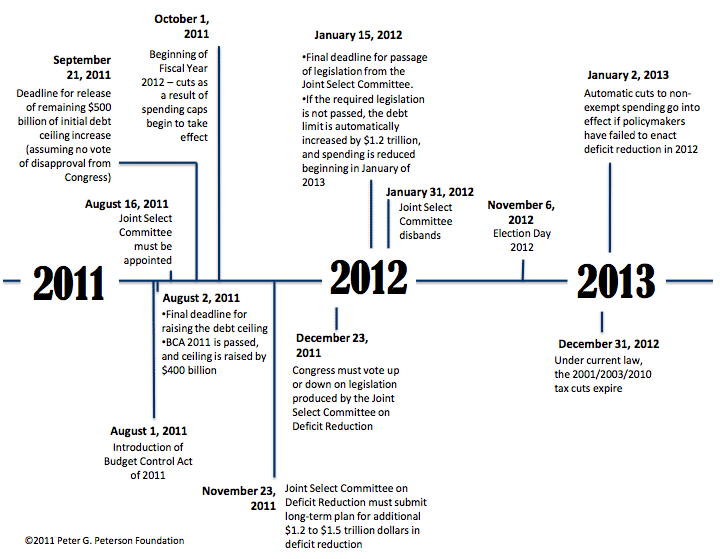 The legislation creates a three-step mechanism for raising the debt ceiling, tying each step to a related phase of the deficit reduction process and Congressional disapproval.

First step: Upon the passage of the act, spending caps on discretionary spending go into effect. On August 2, the President certified that the government is within $100 billion of the debt limit, triggering a $400 billion increase in the debt ceiling.

Third step: There are three ways that the debt ceiling can be increased by an additional $1.2 trillion to $1.5 trillion once the President certifies that it is necessary:

The law puts in place caps that will reduce discretionary outlays by $756 billion over ten years. Discretionary programs are funded every year during the appropriations process, and include the Department of Defense, the Department of Education, NASA, the National Park Service, and much more. During Fiscal Year (FY) 2012 and 2013, separate caps exist for securityi and non-security spending. From FY 2014 onward, a single cap is in place for all discretionary spending. But the BCA does not specify how spending under the cap should be allocated – that will be up to future budget deliberations.

The table below illustrates the effects of the caps on projected outlays of discretionary spending through 2021. The spending cuts required by the caps are larger in the out years and, despite what some commentators have noted, would represent only a minimal drag on the economy in the next couple of years while the economy is expected to still be recovering from the recession. The law also does not preclude additional stimulus – but, unless exempted, discretionary activities would have to be funded under the caps and mandatory programs (such as supplemental unemployment assistance) and would be subject to statutory pay-as-you-go (PAYGO) requirements that require offsets in the form of spending cuts or revenue increases.

For more detail on the spending caps, click here

The Joint Select Committee on Deficit Reduction is tasked with coming up with at least $1.5 trillion in savings over the next ten years. It will be comprised of 12 members, 3 appointed by each party’s leader in each chamber of Congress.

From the House of Representatives:

If the committee fails to report recommendations, or Congress and the President fail to enact those recommendations into law, the President is required to order a sequestration on January 2, 2013. The Office of Management and Budget will calculate the amount to be sequestered that would achieve at least $1.2 trillion in deficit reduction over ten years.

Sequestration operates as proportional, across-the-board reductions in spending in non-exempt programs. Social Security, Medicaid, Medicare benefits, unemployment insurance, programs for low-income families, and civilian and military retirement programs are exempt. Medicare payments to doctors, hospitals and other health care providers are not exempt but are limited to a 2 percent cut. Defense—currently about $550 billion when funding for the operations in Afghanistan and Iraq is excluded—is the largest non-exempt area of the budget, and it would be required to contribute 50 percent of any sequestration ordered. (Funding for activities in Iraq and Afghanistan would be exempt from sequestration.) 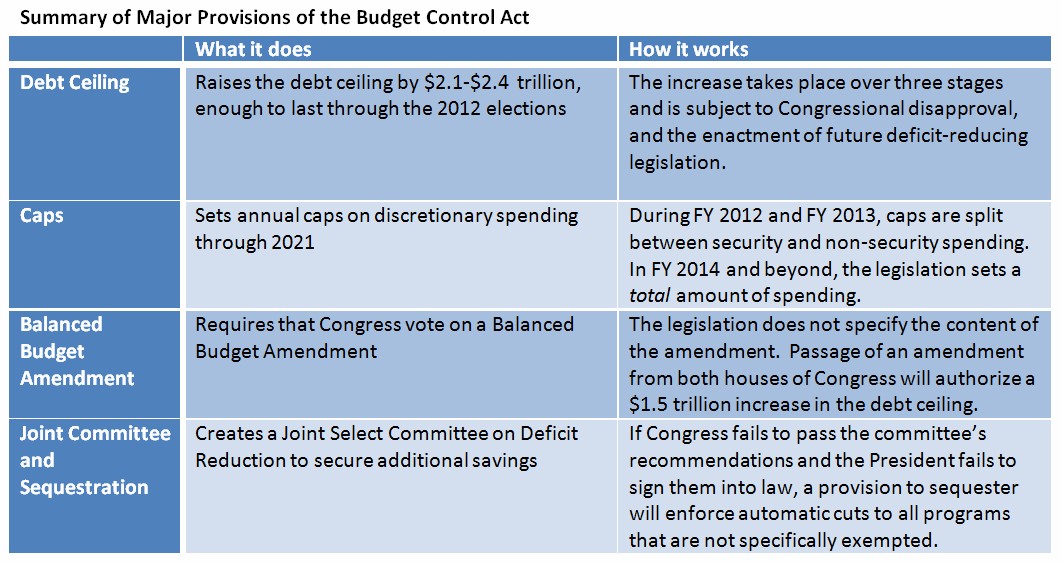 Where this Leaves Us

If the BCA is successful, and no changes affecting budgetary outcomes are made to current laws, Congress will have averted a default on the debt and taken a major step toward improving the country’s long-term budget outlook.

But by focusing on the budget process instead of addressing the structural drivers of the country’s deficits and debt, the BCA falls short of a “grand bargain.”

By Peter G. Peterson Foundation calculations, the law will reduce the debt to 66.2% of Gross Domestic Product (GDP) by 2021, assuming current laws remain in place (for example, that the tax cuts extended in December 2010 will expire as scheduled in December 2012.) In other words, to reduce the projected debt to 66% of GDP by 2021, Congress will need to forego or else “pay for” popular current policies that are not included in the “current-law” baseline. These include the 2001/2003/2010 tax cuts (currently set to expire at the end of 2012) and the “doc fix,” which keeps Medicare payments to doctors from being cut by 30 percent. With a price tag of $3 trillion, the tax cuts alone would more than wipe out the $2.1 trillion in deficit reduction achieved by the Budget Control Act. 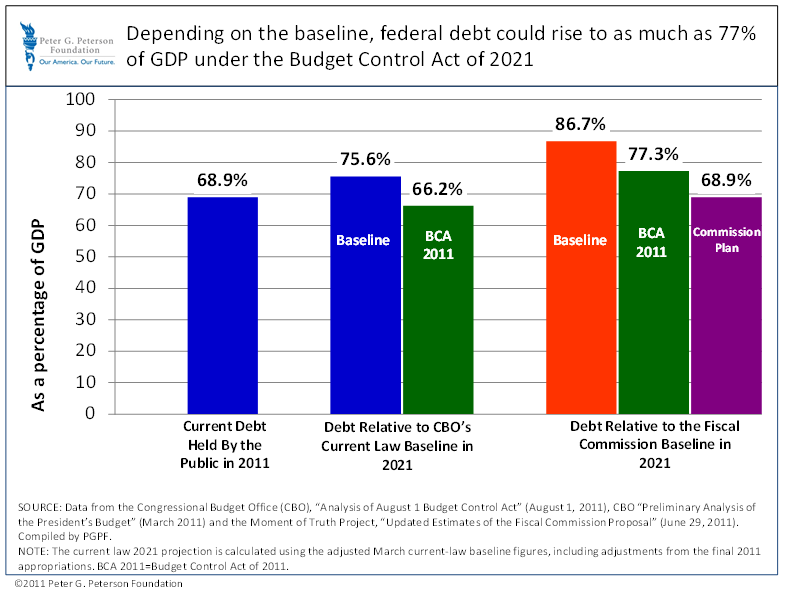 Not surprisingly, if the Budget Control Act is measured against the “plausible” baseline used by the National Commission on Fiscal Responsibility and Reform that assumes that those popular policies are extended, federal debt would grow to 77.3% of GDP by 2021. (Under both baselines, the BCA reduces the deficit by the same amount. But under the plausible baseline, the level of debt in 2021 is higher because the baseline debt in that scenario is higher.)

These baseline differences highlight the importance of two unaddressed issues and demonstrate the challenge of achieving the BCA’s potential level of debt reduction. Indeed, these two issues should serve as a starting point for the work of the Joint Select Committee: Medicare’s “doc fix” and expiring tax cuts. With a combined price tag of $3.3 trillion when accounting for debt service costs, these two policies will more than wipe out the $2.1 trillion in deficit reduction achieved by the BCA unless they are financed by offsetting changes in spending or revenues.

The Simpson-Bowles Commission used a baseline that assumed most of the tax cuts and the “doc fix” continued, and then calculated savings for their proposal from that higher, “current policy” baseline. That is how they generated $4 trillion in savings, but ended up with a debt level in 2021 that is close to the BCA’s. The BCA achieved $2.1 trillion in deficit reduction, but uses a current law baseline, which assumes that all the tax cuts expire and Medicare physician payments are reduced – which means these “savings” are already included in its projections of federal spending and revenue. As the figure below illustrates, continuing these policies – as Congress has in the past – would wipe out the debt reduction accomplished by full implementation of the Budget Control Act relative to current law.

The Budget Control Act of 2011 is, as President Obama said upon the bill’s passage, an “important first step” towards putting the country on a more responsible fiscal course. Its most significant achievements are budget process mechanisms. Enforceable spending caps, an empowered deficit reduction committee, and current PAYGO laws can contribute to fiscal discipline. Process mechanisms—when combined with a shared commitment among policymakers to stay on a fiscally responsible path—have been successful in the past at holding Congresses and Presidents to their promises. If the spending caps remain in place, the Joint Committee comes up with a deficit reduction bill (or across-the-board cuts take effect beginning in 2013), and any future policy changes (extension of tax cuts, a second stimulus, etc.) are paid for, the debt reduction achieved will be significant.

However, BCA does not address the rising costs of entitlement programs (especially the health programs) or the potential role of revenues in meeting our long-term budgetary challenge. To put the budget on a sustainable course over the long run, we will need more comprehensive reforms that address our structural deficits.

It took a lot of hard work to get to where we are today. Much hard work remains to be done.

i Security spending is defined as spending by the Departments of Defense, Homeland Security, and Veterans Affairs plus all international programs and other security activities.

Long-Term Implications of the Budget Control Act of 2011
After the Supercommittee, Fiscal Policy Questions Still Have to be Addressed
Analysis: CBO Budget Outlook FY 2012–2022