Here are four key takeaways from our analysis of the CBO report:

1) Federal debt is already at its highest level since 1950 and is projected to climb to 150 percent of GDP under current law by 2047 — by far an all-time high.

2) Rising debt is a result of a structural imbalance between revenues and spending. Under current law, spending growth, which is fueled primarily by the aging of the population and growing healthcare costs, significantly outpaces the projected growth in revenues.

Tweet: Our rising #NationalDebt is caused by a mismatch between spending and revenues

3) As the debt grows and interest rates rise, interest costs are projected to increase rapidly. By 2028, interest will become the third largest category of the budget, behind only Social Security and Medicare.

4) Rising debt will harm our economy and slow the growth of productivity and wages. On our current path, the annual average income loss for a 4-person family would be $16,000 by 2047. 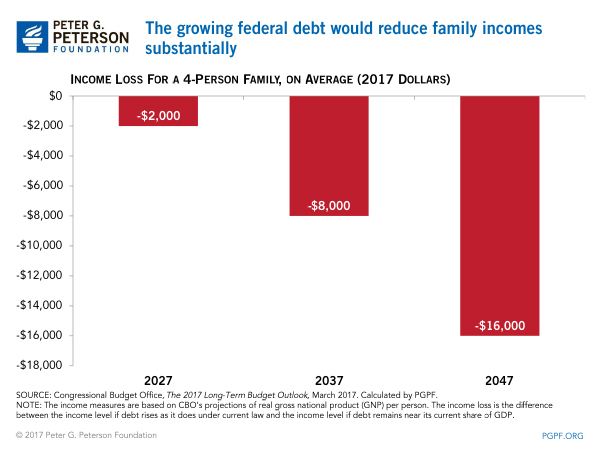 The good news is that it’s not too late to adjust course, and the sooner we get started, the easier it will be to fix. To learn more about bipartisan policy options, visit our Solutions page.