Who Will Be Affected By Medicaid Work Requirements?

This would be a major change in the way that Medicaid works, and would have important implications for the program, its beneficiaries, and the federal budget. To better understand those implications, below is information outlining what the guidance means and how it might affect certain Medicaid recipients.

The new guidance from CMS serves as a blueprint for states seeking federal approval to institute a work requirement as a condition of eligibility for Medicaid recipients. Enrollees that are students, caregivers, pregnant women, medically frail, or disabled would be exempt from the work requirement. Although states would be afforded flexibility in determining the precise stipulations of a work requirement, most proposals are expected to require a minimum number of hours of work per week or allow for certain other activities as a benchmark.

How many Medicaid recipients may be affected by work requirements?

According to data published by the Center for Medicare and Medicaid Services, 74 million individuals were enrolled in Medicaid and the Children’s Health Insurance Program (CHIP) in November 2017 — 68 million in Medicaid and 6 million in CHIP. Estimates by the Medicaid and CHIP Payment and Access Commission indicate that nearly half of all beneficiaries were children and about 6 percent were 65 years of age or older. 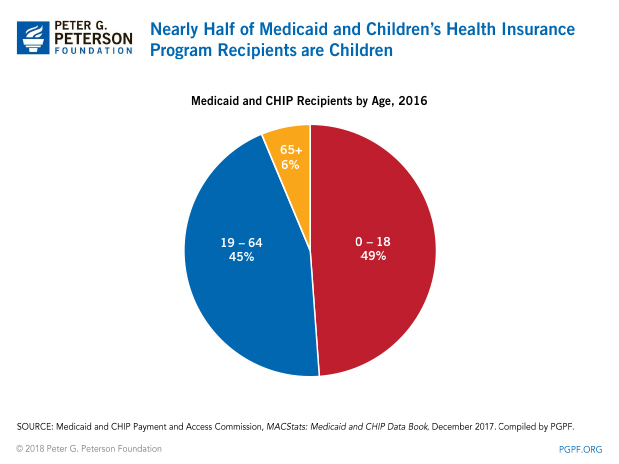 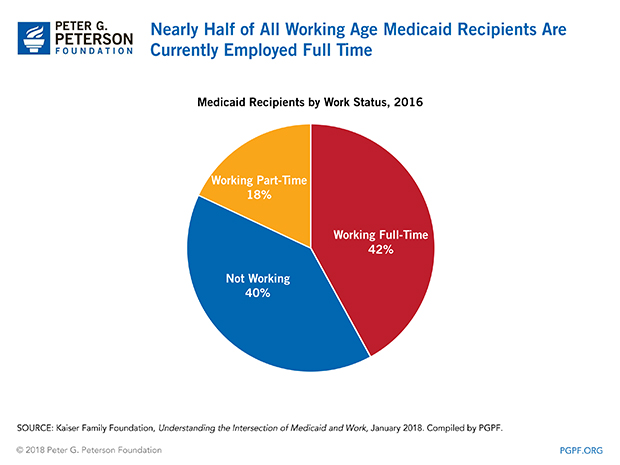 Of the recipients not in the workforce and between 19 and 64 years old, 36 percent were categorized as ill or disabled, 30 percent as taking care of home or family, and 15 percent were going to school.

At this point it is unclear how many Medicaid beneficiaries might be affected by a work requirement. At least 10 states have already submitted work-requirement applications to the federal government, but only Kentucky and Indiana have been approved so far. In addition, the way in which such requirements are applied may differ by state.

Related: Five Things You May Not Know About Medicaid

Spending on elderly and disabled Medicaid beneficiaries is high