The Two Reasons Long-Term Economic Growth Will Slow, and Why the Boost from Tax Cuts is Only Temporary

Growth in the economy is generally determined by the increase in the labor force and the change in productivity of workers. Although growth in the near term will be boosted by recent fiscal policy changes, economic growth is projected to slow over time as the U.S. population undergoes an unprecedented shift in age distribution and other demographic trends set in. The recent forecast from the Congressional Budget Office (CBO) notes that while productivity is projected to be similar to its average since 1950, the long-term trend of slower growth of the labor force will constrain economic growth in the future.

Demographics are one of the largest influencers of growth. From the 1960s through the 1990s, economic growth was boosted by baby boomers entering working age and increased participation of women in the workforce. At its peak in the late 1970s, the labor force was growing at over 3 percent annually. 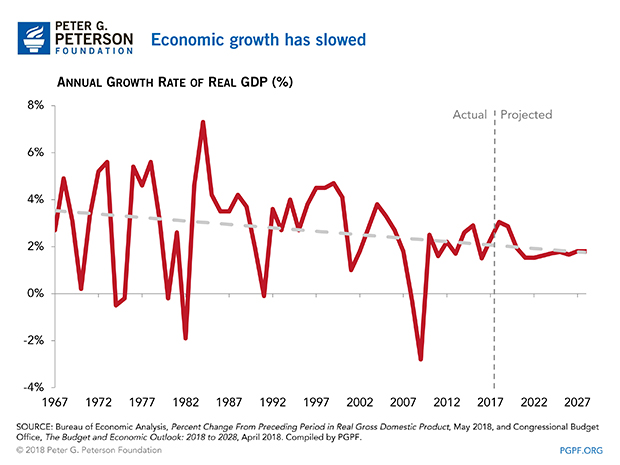 However, baby boomers are now beginning to retire — at a rate of 10,000 per day — and the growth of women’s participation in the labor market has leveled off. Further, long-term trends involving certain groups (like the growing number of people with disabilities) are expected to exacerbate this shift. As a result, CBO projects that growth in the labor force will average 0.5 percent over the next 10 years, similar to the rate of growth since 2008. That rate would be down from an annual average of 1.7 percent from 1982–1990 and around 1 percent from 1991–2007. 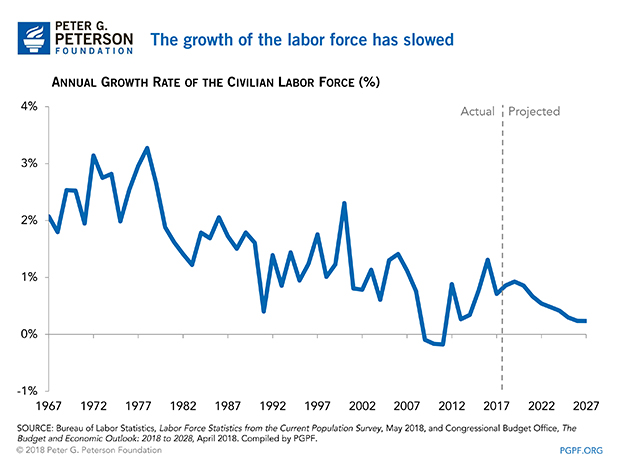 Labor force productivity, which compares the number of hours needed to produce goods and services with the total amount of goods and services produced, is another key ingredient for growth. Productivity generally increases with technological advances, greater investment in equipment, or increases in worker skill and experience. However, productivity is not projected to increase drastically in the coming years, and therefore cannot make up for the decrease in the rate of growth of the labor force. For the period between 2018 and 2028, CBO projects that productivity will grow by 1.4 percent a year — somewhat below the average since 1950. 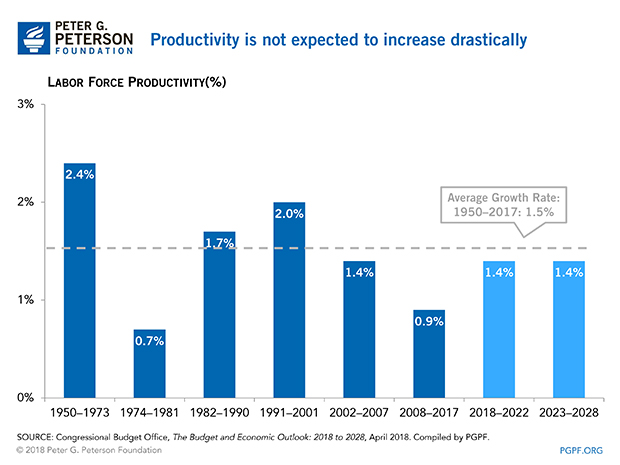 When combined, these two determinants of growth result in much lower potential for growth after 2022. GDP growth is projected to decrease to 2.1 percent in 2023 and remain near that point through 2028. 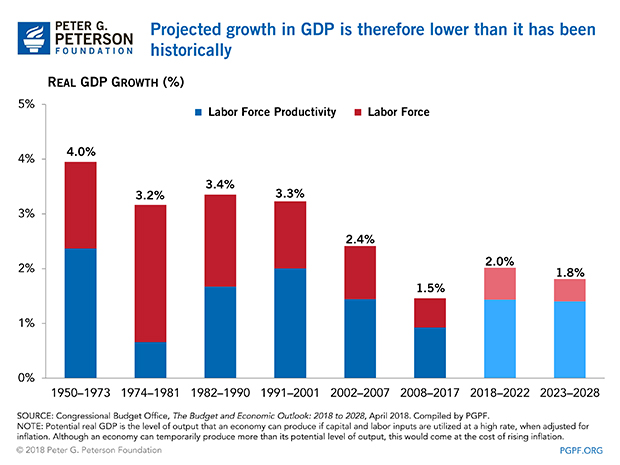 While the Tax Cuts and Jobs Act of 2017 will likely boost economic growth in the near term, the effects of the legislation are temporary. CBO anticipates that certain provisions of the recent tax legislation will encourage more people to seek work, which will increase the size of the labor force slightly. It also attributes a small portion of the projected increase in productivity growth to provisions of the law that affect the intellectual property assets of businesses. However, the effects of the legislation are temporary, and are projected to fade by 2022.