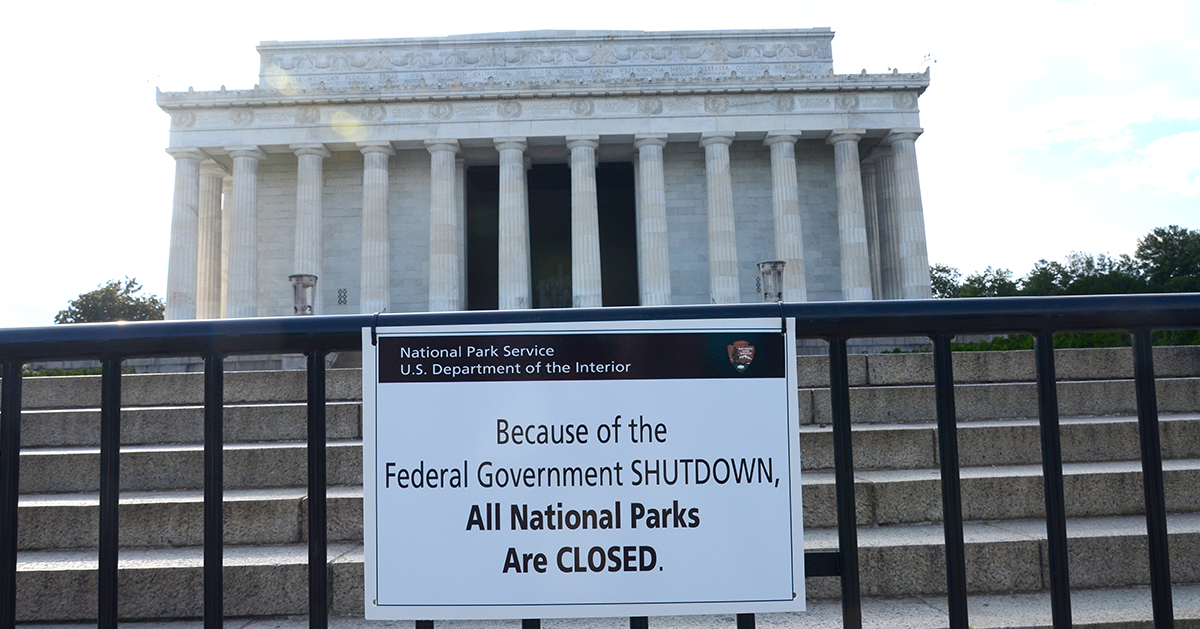 At the end of the day on December 21, the federal government entered a partial shutdown because Congress and the President failed to come to an agreement on funding for seven of the twelve appropriation bills that support government operations. Government shutdowns are costly, wasteful, and harmful to the economy. Here are some examples of the damage this shutdown has caused so far:

Many critically important parts of the federal government are affected.

The seven appropriation bills that are unresolved and therefore affected by the shutdown are:

About 800,000 federal employees are going without pay during the shutdown.

Since the shutdown began, about 800,000 federal employees have been furloughed or are working without pay. This includes officials from the Transportation Security Administration and corrections officers at federal prisons. Many Americans, including federal employees, cannot afford a gap in their income. According to the Federal Reserve, 40 percent of Americans cannot cover emergency expenses of $400 and 20 percent are unable to pay all of their current month’s bills in full.

Beneficiaries of nutrition programs such as the Supplemental Nutrition Assistance Program (SNAP) and the special nutrition program for Women, Infants, and Children (WIC) face uncertainty about their benefits.

SNAP, formerly known as Food Stamps, provides benefits to about 40 million beneficiaries to help them buy nutritious food. Although SNAP is an entitlement program, it receives funding through the annual appropriation process. Currently, the program has about $3 billion in contingency funds that would cover benefits in the short-term. However, if the shutdown continues past February, there will not be enough funding to pay all benefits, which could make it difficult for beneficiaries to afford food. The WIC program will face a similar shortfall if the shutdown continues. In 2014, the last year for which data is available, almost half of all infants in the United States received benefits through WIC.

Loans from several government agencies will be halted or delayed.

Housing development grants, as well as loans for new homebuyers, small-business owners, and rural development could be delayed as the shutdown continues. For example, the Department of Agriculture has announced that it won’t issue loans to encourage development in rural areas. The Small Business Administration has also announced that it will not be processing loan applications.

The Smithsonian recently announced that it was closing all museums, in addition to the National Zoo, because of the shutdown. Overflows of garbage and human waste has prompted concerns about public health and safety and led to the closure of parts of popular parks such as Yosemite National Park and the Independence National Historical Park, home to the Liberty Bell. What’s more, the National Park Service estimates that it is losing $400,000 per day from foregone park entrance fee revenue.

The shutdown is bad for the economy.

A 2013 analysis by Macroeconomic Advisors found that shutdowns can increase the rate of unemployment and the costs of borrowing as well as reduce growth in Gross Domestic Product. S&P Global found that a full shutdown in 2017 could have reduced real fourth-quarter GDP growth by $6.5 billion per week. While the government is currently experiencing a partial shutdown, there are still economic costs. Beth Ann Bovino, S&P’s chief US economist, has estimated that the shutdown will cost approximately $1.2 billion per week.

As Peter G. Peterson Foundation CEO Michael A. Peterson put it, “There’s nothing good about this shutdown.”

Instead of engaging in fiscal brinksmanship, lawmakers should find commonalities to make our government work efficiently and effectively. Government shutdowns are a waste of taxpayer money, potentially harmful to the economy, and a breach of the contract between citizens and their lawmakers.

Related: Three Reasons Why a Government Shutdown is Harmful

14 Charts That Illustrate Our Fiscal Situation as We Close Out 2021
What is a Continuing Resolution?
How Much Money Is Left in COVID-19 Relief Programs?
Spending on Unemployment Insurance is Returning to Pre-Pandemic Levels
“Build Back Better” is Mostly Paid For — But Uses Budget Gimmicks
Income and Wealth in the United States: An Overview of Recent Data
Bipartisan Infrastructure Bill Less than 40 Percent Paid For
Leading Economists: The Economy Bounced Back Fast, But Major Questions Remain
Income Inequality Has Been on the Rise Since the 1980s, and Continues Its Upward Trajectory
The Labor Market Recovery Continued in October