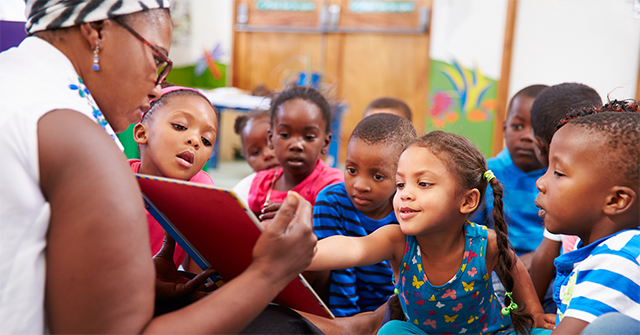 Federal spending on children is a key part of the budget and is seen by many as a critical investment in the nation’s future, helping to alleviate child poverty and supporting the next generation of productive adults.

However, according to the Urban Institute’s latest Kids’ Share report — an annual accounting of government spending on children — such spending fell to 1.9 percent of gross domestic product (GDP) in 2018, the lowest rate in a decade. Here’s an overview of federal spending on children as presented in that report. 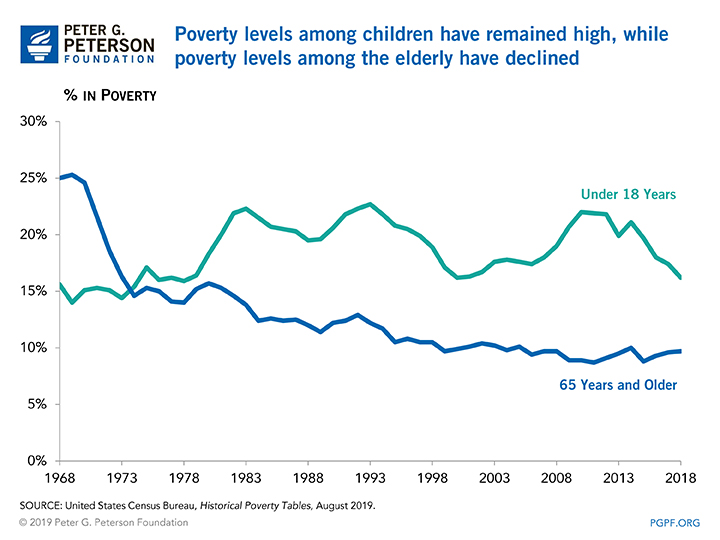 Only 9 Percent of Federal Spending Goes Towards Children

While the child poverty rate remains high, the amount of the federal budget directed towards children remains low compared to other budget categories. In 2018, $379 billion — or 9 percent of the federal budget — was spent on children, with another $106 billion provided through tax reductions for families. Those commitments totaled, on average, about $6,200 per child. In comparison, 45 percent of the 2018 federal budget went towards health and retirement benefits for adults through Social Security, Medicare, and Medicaid, 15 percent went towards defense spending, and 8 percent went to interest on the federal debt. 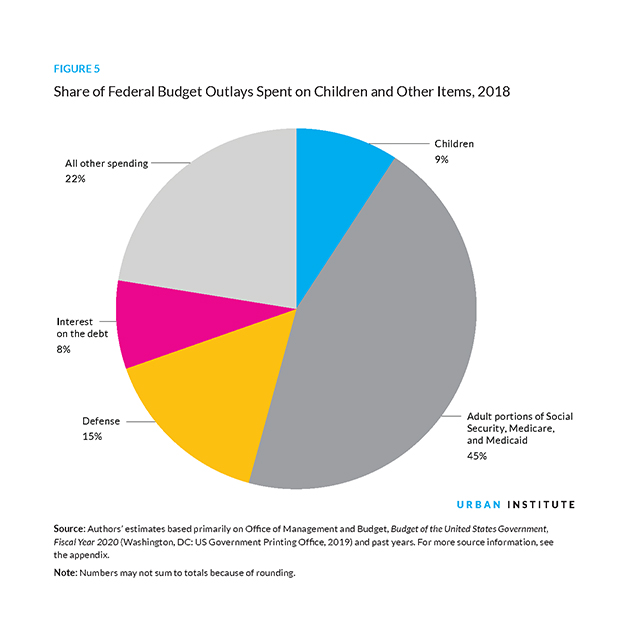 Federal Spending on Children is Expected to Decline

Looking ahead, federal spending on children is on track to become an even smaller part of the budget. Total federal spending is projected to increase by $1.5 trillion over the next decade, but only 3 cents of every additional dollar would go towards children’s programs; 67 cents of every additional dollar would go towards Social Security, Medicare, and Medicaid and 28 cents would go towards interest on the debt. Over that period of time, spending on children is projected to shrink from 9.2 percent of federal outlays to 7.5 percent. 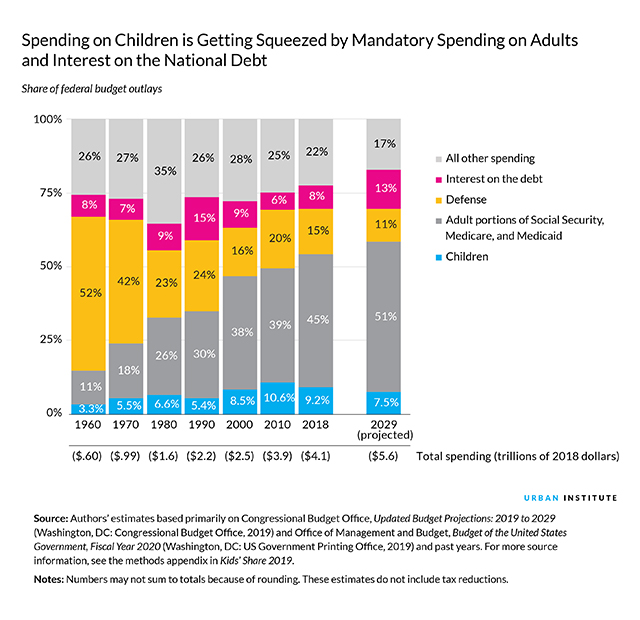 Health programs and various tax provisions constitute about 60 percent of federal expenditures on children. Tax provisions that benefit children — primarily from the child tax credit, earned income tax credit, and the exclusion from taxation of employer-sponsored health insurance for dependent children — totaled $178 billion in 2018. Meanwhile, $116 billion was spent on health programs in 2018 — largely stemming from Medicaid and the Children’s Health Insurance Program.

Nutrition, income security, and education comprise roughly 30 percent, or about $150 billion, of federal expenditures on children. These categories include programs such as the Supplemental Nutrition Assistance Program, Social Security survivors’ and dependents’ benefits directed toward children, and Title I funding to schools with high percentages of children from low-income families.

Other budget categories that benefit children — such as early education, social services, housing, and training — received less than 10 percent of federal expenditures on children. 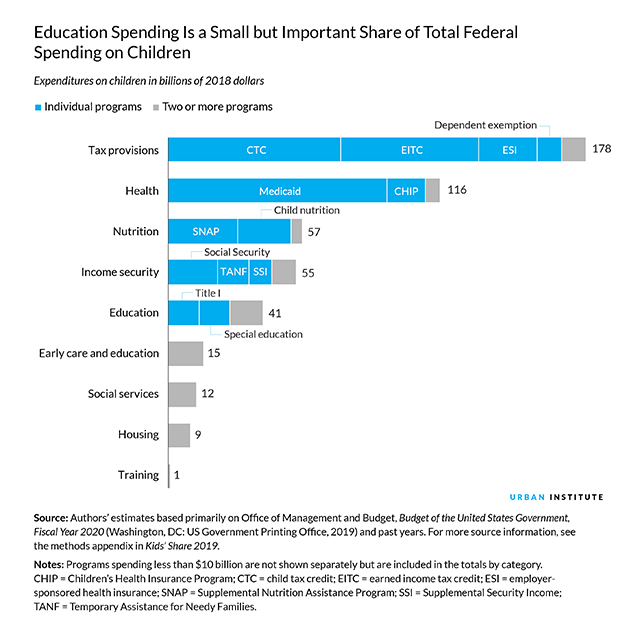 Next Year, We Will Spend More on Interest Costs than on Children

One of the most damaging effects of rising debt is rapidly growing interest costs, which makes it harder to invest in our nation’s economy. In May, CBO projected that under current law, interest payments will climb from 1.8 percent of GDP in 2019 to 3 percent in 2029. Under those projections, interest payments on the national debt would surpass total federal spending on children by next year. The federal budget is a statement of the nation’s priorities — and we are on pace to spend more on interest on the debt than we are on the next generation of Americans. 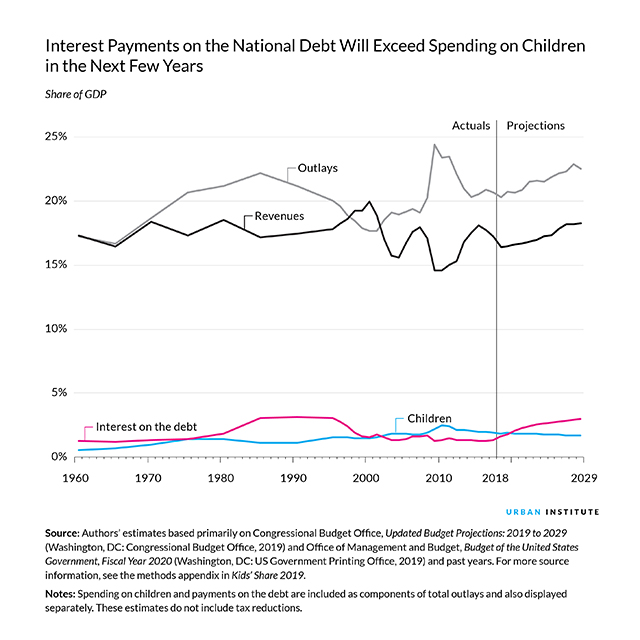 How Can Fiscal Policy Help Address a Coronavirus-Induced Recession?
Why the American Healthcare System Underperforms
What is SNAP? An Overview of the Largest Federal Anti-Hunger Program
Six of the Largest Tax Breaks Explained
Five Approaches to Taxing Wealth in the United States
How Do Marginal Income Tax Rates Work — and What if We Increased Them?
What is a Wealth Tax, and Should the United States Have One?
Four Simple Scenarios That Show How Marginal Rates and Tax Breaks Affect What People Actually Pay
Millions Gained Healthcare Coverage under Obamacare, But That Trend Is Reversing
How Does the Capital Gains Tax Work Now, and What Are Some Proposed Reforms?