Programs to support children are a key component of the federal budget, representing a critical investment in the nation’s future, helping to alleviate child poverty and supporting the next generation of productive adults.

The latest Kids’ Share report from the Urban Institute provides a view of resources targeted to children, placing such spending in the larger context of our overall budget. The report contains valuable insights about federal spending and tax incentives designed to help children and how those activities compare to other priorities within the budget.

Here are the top five takeaways from the latest Kids Share report, with further detail below:

Only 7 Percent of Federal Outlays Goes Toward Children

In 2020, federal spending on children amounted to $482 billion, or 7 percent of the federal budget. In comparison, 33 percent of outlays in 2020 went towards health and retirement benefits for adults 18 years of age and older through Social Security, Medicare, and Medicaid; 11 percent went towards defense spending; and 5 percent went to interest on the federal debt. It is important to note that those percentages only include the amount spent through Social Security, Medicare, and Medicaid on recipients 18 years of age and older. In total, federal expenditures averaged about $7,800 per child — an increase of $1,035 from the previous year. That increase primarily reflects federal relief efforts in response to the pandemic. Of the $5 trillion spent on pandemic relief enacted by May 2021, $600 billion was allocated through 2027 to support children.

Despite growth in the absolute dollars spent on children in 2020 from pandemic relief funds, spending on children fell as a share of total federal funding and that proportion is projected to decline further over the next decade. Total federal spending is projected to increase by 47 percent over the next decade, but spending on children is expected to decrease by 0.2 percentage points. The majority of the growth in federal spending will continue to go towards Social Security, Medicare, and Medicaid — with combined spending for adults in those programs set to increase from 33 percent to 51 percent by 2031.

Health programs and various tax provisions constituted 63 percent of federal expenditures on children. Tax provisions that benefit children — primarily from the child tax credit, earned income tax credit, and the exclusion from taxation of employer-sponsored health insurance for dependent children — totaled $239 billion in 2020 (including $120 billion in refundable tax credits that are classified as spending). In addition, $138 billion was spent on health programs — largely stemming from Medicaid and the Children’s Health Insurance Program.

Nutrition, income security, and education comprised roughly 30 percent, or about $180 billion, of federal expenditures on children. Those categories include programs such as the Supplemental Nutrition Assistance Program, Social Security survivors’ and dependents’ benefits directed toward children, and Title I funding to schools with high percentages of children from low-income families.

Other budget categories that benefit children — such as early education, social services, housing, and training — received less than 7 percent of federal expenditures on children.

In the Coming Years, We Will Spend More on Interest Payments on the National Debt than on Children

By 2031, the Congressional Budget Office projects that interest costs will increase to $910 billion. That growth would crowd out other national priorities including spending on children. The federal budget is a statement of the nation’s priorities — and we are on pace to spend more on interest on the debt than we are on the next generation of Americans.

While the Kids’ Share report outlines the impact federal spending had on children in 2020, lawmakers are currently considering additional policies in this area. The Build Back Better Act, which was passed in November by the House of Representatives and is under consideration by the Senate, proposes additional spending on children. The legislation would establish an affordable child care program, provide universal pre-kindergarten, and extend the increased Child Tax Credit. Such proposals would amount to an additional $570 billion spent on children over the next 10 years — though such funding is very much up in the air as lawmakers debate priorities and the fiscal and economic effect of legislation. 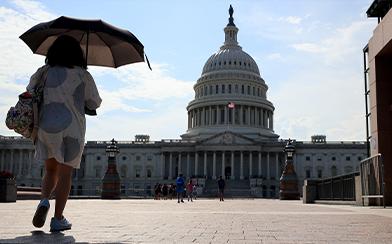 Due to the COVID-19 pandemic and the resulting monetary policy response, short-term interest rates are currently near zero and longer-term rates are historically low.
Housing Insecurity: What is the Federal Government Doing to Prevent Evictions during the Pandemic?

Analysis: CBO 2015 Long-Term Budget Outlook
CAP Shows What it Might Take to Balance the Budget
Issues in Brief: The Debate Over Tax Expenditures