What Are Automatic Stabilizers and How Do They Affect the Federal Budget?

The economy goes through cyclical movements over time, with periods of growth followed by downturns. To help improve responsiveness to fluctuations in the business cycle, a number of important programs in the federal budget automatically increase or restrain spending depending on economic conditions. Those programs, known as automatic stabilizers, help ensure that federal policy is better tailored to provide more help when needed, and less when not, for families and businesses.

A key feature of automatic stabilizers is their timeliness. Creating new programs during a downturn can lead to delays as lawmaker’s debate proposed legislation. Existing programs that act as automatic stabilizers, however, do not generally require fresh legislative action, which means that they can kick in quickly during a downturn. However, lawmakers may act to modify or enhance the components of a stabilizing program like they did at the onset of the COVID-19 pandemic.

Automatic stabilizers can be in the form of taxes or spending:

Before the pandemic, taxes often accounted for a larger share of the automatic response to economic downturns than spending programs. A 2015 paper by the Congressional Budget Office (CBO) estimated that “revenues have accounted for about three-quarters, on average, of the effect of the automatic stabilizers on the budget over the past 50 years.”

Automatic Stabilizers and their Effect on the Budget

CBO estimates the average annual contribution of automatic stabilizers to the deficit between 1971 and 2021 as 0.8 percent of potential GDP (an estimate of the value of economic output if labor and capital had been at their maximum sustainable rates). Stabilizers contributed to budget deficits in 37 of the 50 years analyzed. For instance, in 1982 when the U.S. economy was in a recession, the analysis found that stabilizers were responsible for 52 percent of the budget deficit in that year. On the other hand, about half of the $126 billion budget surplus in 1999 was attributed to automatic stabilizers.

Should Automatic Stabilizers Be Strengthened?

In an effort to make stabilizers more effective, researchers have studied their impacts and how they could be better used during future economic fluctuations. For example, in a 2019 paper, a former member of the Board of Governors of the Federal Reserve System, Claudia Sahm, proposed a new automatic stabilizer involving a direct payment to individuals that would automatically be paid out early in a recession and then continue annually when the recession is severe. The paper recommended lump-sum annual payments whenever the national unemployment rate rises by at least 0.5 percentage points, with total payments set to not surpass 0.7 percent of GDP. If the recession is prolonged, payments in subsequent years would only be made if the recession leads to cumulative unemployment rate increases of at least 2.0 percentage points. Sahm argued that making automatic payments to individuals regardless of income levels based on recent changes in the unemployment rate “would ensure that the stimulus reaches the economy as quickly as possible.”

Generally, lower-income households are more likely to spend any additional income compared to higher-income households, which means that strengthening of automatic stabilizers may be more effective if targeted towards lower-income households. The Center on Budget and Policy Priorities argued in a 2016 paper that stabilizers can be made stronger by automatically increasing SNAP benefits when a trigger, possibly tied to state unemployment rates, reaches certain thresholds. It also proposed that higher federal payments to help states cover their Medicaid costs take effect automatically, possibly via the same mechanism that is used to trigger a temporary increase in SNAP benefits.

William A. Galston of the Brookings Institution proposed a three-pronged approach to revitalizing the use of automatic stabilizers in economic downturns. He noted that automatic stabilizers are crucial because they “obviate the need for new legislation during economic downturns, and they would expire when the need for them ends rather than when the political will to extend federal assistance disappears.” To keep the economy afloat during a recession, Galston suggested that the federal government should provide extra assistance to states through Medicaid, the Children’s Health Insurance Program (CHIP), UI, and direct payments. For Medicaid, CHIP, and UI, he proposed that the federal government automatically enhance payments once unemployment rates fall below a certain baseline level. In addition, Galston believed that a new program of direct payment to states would allow them to distribute funds to the neediest localities. Altogether, those three components of Galston’s proposed plan would close an estimated 90 percent of state revenue losses during recessions and would accelerate economic recovery.

The main drawback to suggestions for pegging benefits to indices like jobless rates is the high cost involved. There is apprehension that adding more to our already high and rising national debt, even in temporary cycles, will create a longstanding problem that will be more difficult to address the larger the debt becomes. Furthermore, actions taken to fund automatic stabilizers may negate the effects of the extra financial support. Economists Louse Sheiner and Michael Ng estimate that from 1980 to 2018, discretionary cuts to state and local spending fully offset the stimulative effects of state and local automatic stabilizers. There are also political considerations because lawmakers would like to show constituents that they played an active role in addressing downturns rather than aid being attributed to automatic provisions. Furthermore, lawmakers sometimes have to cut spending or increase taxes to support funding of automatic stabilizers.

Automatic stabilizers provide critical support during economic downturns because they respond almost immediately to changes in income and unemployment, serving as a first line of defense free from legislative delay. They are, however, not the only defense as governments often resort to discretionary fiscal policy, especially when they have to deal with stronger and more drawn-out recessions or when they need to target certain groups, regions, or industries. Considering the important role automatic stabilizers play, economists have suggested reforms to make them more effective. Lawmakers should assess the effect that automatic stabilizers have on both the economy and the federal deficit when considering such reforms. 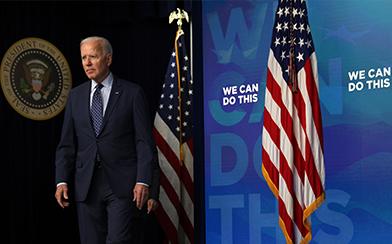 President Biden’s request for discretionary funding for next year (fiscal year 2022) would substantially increase funding for nondefense programs, particularly in the Departments of Education, Health and Human Services, Housing and Urban Development, and Veterans Affairs.
Housing Insecurity: What is the Federal Government Doing to Prevent Evictions during the Pandemic?