"This is about math, not politics": Pension Reform in Rhode Island 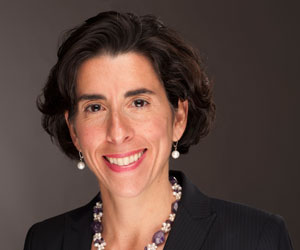 When Rhode Island General Treasurer Gina Raimondo took office in January 2011, she decided to look at an old problem in a new way.

As Raimondo examined Rhode Island’s retirement system during her first months in office, it became clear that pension plans for state employees and teachers were unsustainable. The state faced a $7billion unfunded pension liability created by unrealistic assumptions as well as benefit promises that had been added over time, but never adequately matched by contributions from taxpayers or employees. If Rhode Island did not address the growing liability, the state administered public retirement system would falter and run out of money leaving many without the retirement security they deserved. Also, as pension costs continued to escalate, Rhode Island would be forced to cut vital public services and increase property taxes, further crippling the struggling state economy.

Raimondo established an open dialogue with stakeholders across the state to find solutions. In May 2011 a report called Truth in Numbers defined the problem and provided a framework to solve it. Next, a 12-member commission was formed to study the framework and discuss how to address Rhode Island's pension shortfall. The commission, which included four public labor representatives, met throughout the summer and offered recommendations that formed the basis of the state’s pension reform legislation.

As the pension advisory group worked, Raimondo set out on a campaign to educate citizens about the scope of the challenge and the importance of implementing solutions. As she later said, "We focused on the math, not politics." The approach paid off. When she and Governor Lincoln Chafee introduced the Rhode Island Retirement Security Act of 2011, the public rallied in support.

The Act passed by an overwhelming majority of the General Assembly in November 2011. Although a number of public unions protested the law and are currently contesting it in court, support for the reforms is still widespread and Raimondo has become one of the most popular elected leaders in the state.

These reforms included preserving the defined benefit pension while adding a defined contribution plan, increasing the retirement age to 67 and suspending cost of living adjustments for retirees until the pension system is healthier. The reform reduced the unfunded liability by nearly 50 percent immediately upon enactment and will save Rhode Island taxpayers $4 billion over the next two decades.

Overall, the system was redesigned to be fair to retirees, employees and taxpayers, with no group bearing a disproportionate burden. It provides retirement security by ensuring that future pension costs are predictable and sustainable.

The story of pension reform in Rhode Island shows that if elected leaders abandon inflammatory rhetoric, collaborate across party lines, and engage stakeholders and the public, solving difficult fiscal challenges is possible.