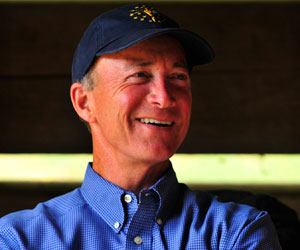 Mitch Daniels was no stranger to fiscal policy when he was sworn in as Governor of Indiana in January 2005. As the former Director of the Office of Management and Budget in the White House, he was well acquainted with the challenges of balancing government’s competing priorities. Even so, the particular challenge he inherited — a nearly $800 million deficit over the course of two years — was daunting and posed a threat to Indiana’s economy.

Daniels’ plan called for slowing the growth of state subsidies to local governments and holding the growth of Medicaid to 5 percent per year as opposed to the previous year’s 11 percent. In addition, the governor looked for creative ways to bridge the budget gap, such as renegotiating numerous state employee contracts and streamlining or even privatizing some government agencies. The result was a $370 million annual surplus within a year. During the course of his two terms in office, Governor Daniels raised $244 million in revenue collections from a tax amnesty program, saved $266 million by outsourcing operations such as food services in correctional institutions and mail services for state employees, leasing the Indiana Toll Road, streamlining agencies such as the Bureau of Motor Vehicles, and leveraging the state’s purchasing power by combining spending on common items. Daniels has exercised similar discipline since, and in 2008, Indiana’s credit rating was raised to AAA for the first time in its history.

Daniels’ approach to balancing Indiana’s budget was conservative, but hardly doctrinaire. Even as the state has reduced the number of government employees and cut spending, Daniels was also willing to raise revenue to fund vital programs, whether by raising the cigarette tax to extend health insurance to the uninsured or by raising the sales tax to offset much-needed property tax relief.

Daniels’ reforms and innovations helped generate billions of dollars for infrastructure improvements and allowed the state to repay money it had borrowed from its public schools, state universities, and local communities. Additionally, it provided the resources to establish a health care program for Indiana’s uninsured.

Indiana's example demonstrates that a pragmatic approach to the budget does not need to come at the expense of elected leaders’ principles and that daunting fiscal challenges can be bridged by focus, dedication, and openness to a variety of solutions.

For more on Mitch Daniels, read: