As 2015 Draws to a Close, Nation's Long-Term Fiscal Outlook Remains a Top Concern for Voters

As Election Year Approaches, Voters Agree the Nation’s Debt should be Top Priority in Washington

NEW YORK — The Peter G. Peterson Foundation’s December Fiscal Confidence Index, a monthly measure of public attitudes about the nation’s long-term debt and the efforts elected leaders are making to address America’s fiscal challenges, is 51 (100 is neutral), indicating voters’ high degree of concern about America’s fiscal outlook. Attitudes about the national debt remained consistently low throughout 2015, as the Fiscal Confidence Index ranged between 45 and 52, demonstrating that even as short-term deficits improved, our long-term fiscal challenges remain a major concern to voters. 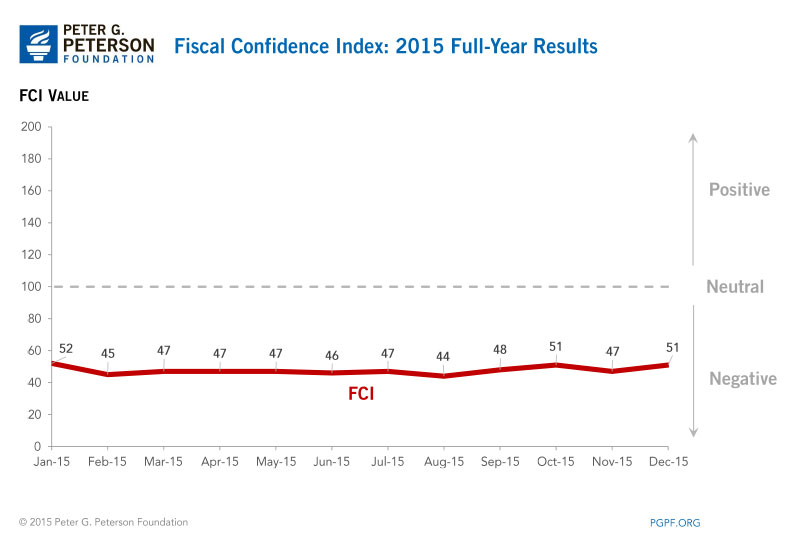 As we head into an election year, voters overwhelmingly feel that the debt should be a primary focus for the candidates. Nearly eight in ten (78%) agree that the issue should be one of the top three priorities for the President and Congress, with fully eight in ten (80%) voters agreeing their leaders in Washington should spend more time addressing the nation’s long-term debt. Americans feel that the United States is on the wrong track on addressing the nation’s debt (26% right / 60% wrong track), a belief that has held consistent over the course of the year.

"Voters understand that in order to have a growing prosperous economy, we must first get our fiscal house in order," said Michael A. Peterson, President and CEO of the Peter G. Peterson Foundation. "As the election year approaches, Americans want and expect all candidates to put forward plans to address our long-term fiscal challenges."

The Peter G. Peterson Foundation commissioned a poll by the Global Strategy Group and North Star Opinion Research to survey public opinion on the national debt. The nationwide poll included 1,004 U.S. registered voters, surveyed by telephone between December 14 and December 17, 2015. The poll has a margin of error of +/- 3.1%. The poll examined voters’ opinions on the national debt, political leadership, and America’s fiscal and economic health.

Detailed poll results can be found online at: www.pgpf.org/FiscalConfidenceIndex

About the Peter G. Peterson Foundation
The Peter G. Peterson Foundation is a nonprofit, nonpartisan organization that is dedicated to increasing public awareness of the nature and urgency of key fiscal challenges threatening America's future, and to accelerating action on them. To address these challenges successfully, we work to bring Americans together to find and implement sensible, long-term solutions that transcend age, party lines and ideological divides in order to achieve real results. To learn more, please visit www.pgpf.org.