The world watches as the Greek tragedy unfolds, as pensioners continue to line up at shuttered banks, desperately attempting to withdraw some of their life savings. These heartbreaking images show us what a debt crisis really looks like, as Greece's economy is in free fall and its most vulnerable citizens are so profoundly affected.

As a first-generation Greek American, I have more than a passing interest in Greece's condition (my father changed his name to Peterson from Petropoulos, which means "son of Peter"). But I also care deeply about the enduring opportunity for every citizen of the United States to live out the American Dream that I have been so blessed to live.

With more than 60% voting a resounding "no" on a proposed European financing offer, Europe and Greece face fundamental questions about where they go from here. Greece has unfortunately left itself with few good options. 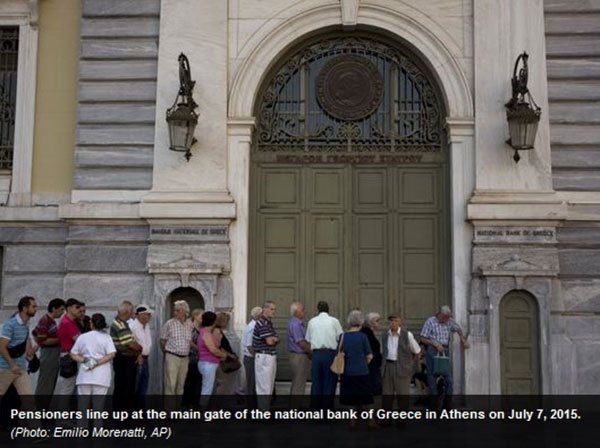 The world is focused on critical near-term questions, but it is important to remember that the seeds of this despair were planted long before the recent crisis began. Although austerity measures and currency limitations made matters worse, Greece has faced imbalances between spending and revenues over many years, and the resulting high level of debt gave the Greeks little flexibility for dealing with the current fiscal and economic crisis once it began.

Unfortunately, now there are no quick fixes or painless paths forward. The country is left with limited and poor options to stabilize the economy and provide relief, potentially relying on other nations to dictate the terms of their future. Indeed, the better time to act was well before the crisis.

As a first-generation Greek American, I have more than a passing interest.

There are countless differences between the circumstances of the U.S. and Greece. We are in a fundamentally better position and are nowhere near this kind of economic crisis.

Nonetheless, there are important lessons to be learned about the benefits of long-term planning and maintaining fiscal health and flexibility.

Without question, the United States remains on a fiscal path that is unsustainable and dangerous by any international standard. Last month's non-partisan Congressional Budget Office analysis projects that by 2040, federal debt will climb to more than 100% of gross domestic product based on current laws, and would reach 175% of GDP under less optimistic assumptions. Debt at that level, CBO warns, would significantly harm our economy, reduce incomes and increase the chances of a fiscal crisis.

As just one staggering data point, interest costs alone will reach $5.5 trillion over the next decade, and are on a path to exceed all federal revenues. That's an absurd fiscal trajectory for any country to put itself on — including and especially a strong nation such as America.

While American debt can inflict pain on its citizens the same way that Greece's has, one critical comparative advantage we have is time. This time gives us a wider range of options to choose from, and to make decisions on our own terms. Because a major fiscal crisis is not right in front of us, we can implement reforms that are sensible, gradual and compassionate.

There are major benefits of putting the U.S. on a stable fiscal path. A strong fiscal foundation is key to increasing incomes, prosperity and opportunity. With lower interest costs, we will have more resources available for important private and public investments that improve productivity and competitiveness. And fiscal strength is essential to maintaining a safety net for the most vulnerable, and to our ability to respond to unforeseen crises, foreign and domestic.

It is often hard for the U.S. to make politically difficult choices in the absence of an immediate crisis. But complacency carries a cost. A growing debt burden hurts our economy well in advance of any crisis. And sadly, the situation in Greece is showing us how high the costs of a full crisis can be.

My father often reminded me of the Greek concept of οικονομία or "economia" — the importance of saving for the future. I am sure he is looking down on Greece with great concern, but with the hope that his beloved America will take advantage of the opportunity it has to solve its own fiscal challenges.