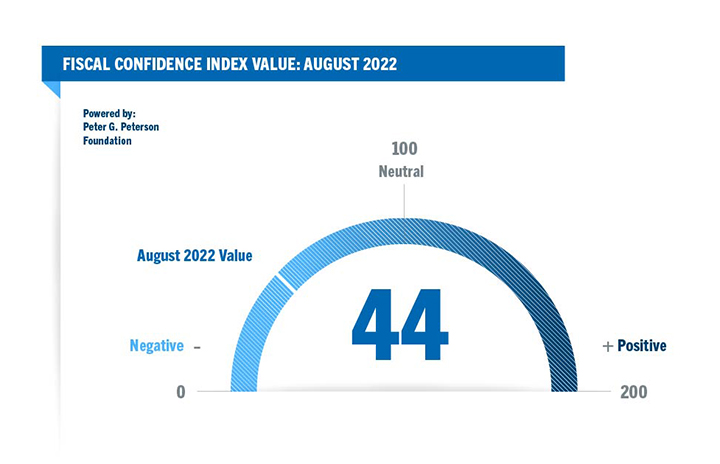 Topline survey results from the Fiscal Confidence Index for August 2022. The FCI value for August is 44.

The Peter G. Peterson Foundation commissioned this poll by the Global Strategy Group and North Star Opinion Research to survey public opinion on the national debt. The online poll included 1,000 registered voters nationwide, surveyed between August 15, 2022 and August 17, 2022. The poll has a margin of error of +/- 3.1%. The poll examined voters’ opinions on the national debt, political leadership, and America’s fiscal and economic health.

NEW YORK — U.S. Fiscal Confidence jumped from an all-time low upon the passage of the Inflation Reduction Act of 2022, which is projected to reduce deficits by more than $300 billion over the next 10 years and potentially provide greater savings after that. The Peter G. Peterson Foundation’s Fiscal Confidence Index is 44 (100 is neutral), with a 15-point improvement in the Expectations subcategory, reflecting voters’ strong approval and desire for policymakers to continue lowering deficits and paying for their priorities.