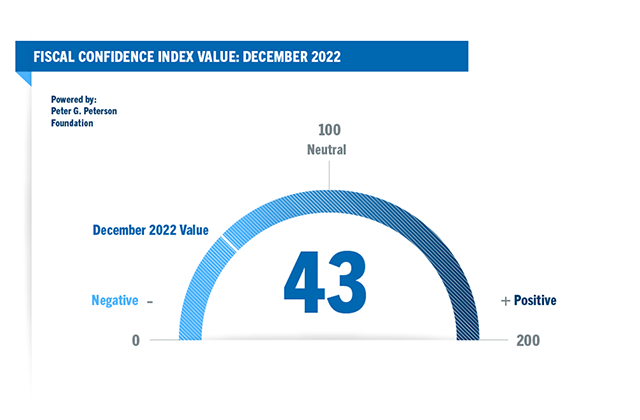 The Peter G. Peterson Foundation commissioned this poll by the Global Strategy Group and North Star Opinion Research to survey public opinion on the national debt. The online poll included 1,000 registered voters nationwide, surveyed between December 19, 2022 and December 22, 2022. The poll has a margin of error of +/- 3.1%. The poll examined voters’ opinions on the national debt, political leadership, and America’s fiscal and economic health.

The Fiscal Confidence Index value is derived from six questions in three categories: Concern, Priority, and Expectations. The December 2022 scores are: Concern (36), Priority (26), Expectations (66). For the complete methodology used to determine the Fiscal Confidence Index value, click here. For full results, including demographic information, download the PDF below:

As you may know, following the 2022 midterm elections, we will have divided government with Democrats controlling the White House and the U.S. Senate, and Republicans controlling the House of Representatives. For each statement below, please indicate how much you agree or disagree.

In a divided government, lawmakers have a responsibility to work together on priorities like the national debt.

Members of Congress should be willing to put their election politics aside and embrace a bipartisan approach to reducing the national debt.

The national debt shouldn’t be used as a partisan issue.

NEW YORK — As we enter the new year and an era of divided government, the vast majority of U.S. voters want their leaders to work together on our nation’s unsustainable national debt. With a Democratic administration and Senate, and Republicans controlling the House, voters believe their leaders have a responsibility to find bipartisan solutions to our fiscal and economic future.