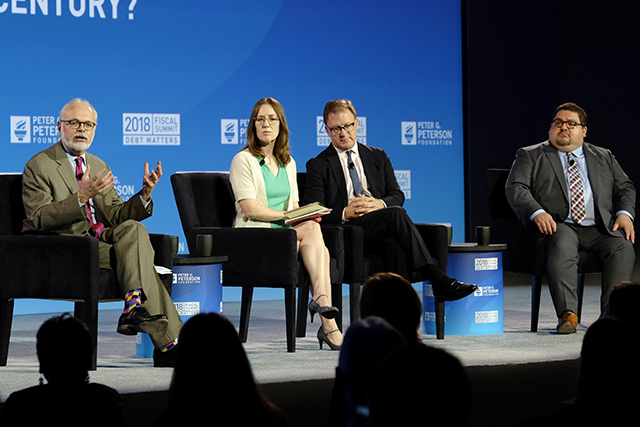 US 2050 is a new joint initiative of the Peterson Foundation and the Ford Foundation examining the demographic, socio-economic, and ﬁscal trends that will shape our nation in the decades ahead. This Fiscal Summit panel brought together four of US 2050’s Advisory Board members to discuss their work to build a comprehensive view of our economic and ﬁscal future — and the implications for the social and ﬁnancial well-being of Americans.

Wessel opened the conversation by describing the goal of the project as laying the “intellectual foundation” for exploring how the changing demographics of America — including aging, race, ethnicity, and other factors — aﬀect the future ﬁscal and economic health of the nation. Through US 2050, Wessel noted that research is getting under way to connect the dots between a number of interrelated issues and trends — including labor force participation, education, immigration, fertility, health status, caregiving, family structure, retirement savings, and political institutions.

Explaining the demographic shifts under way, Lopez pointed out that “we know, to a good extent, what the nation’s population will look like in 20 years,” which will be increasingly diverse. With significant variance in education, poverty, and health, for example, among different racial and ethnic groups, it is essential to understand the implications of these changes, according to Lopez. He noted that population projections can change over time, especially given changes in immigration patterns. Fifty-nine million people, he said, have entered the United States since 1965 as immigrants, an influx that has been a key driver of population growth overall and has significantly changed our racial and ethnic composition.

Making the connection between changing demographics and a strong future economy, Boushey highlighted productivity growth as a critical factor in how the country will be able to adapt and respond in the years ahead. She noted that in coming decades, we will have fewer workers per retiree. “We should be especially worried,” she said, “if we’re not seeing productivity gains … because what’s going to make or break the living standards of the elderly is how productive those cur-rent workers are.” She also identiﬁed large diﬀerences “across communities and across families in access to education” as problematic in exacerbating the outcomes of inequality.

With a focus on the interrelation between poverty, productivity, and demands on government funds, Doar laid out four key trends that will aﬀect low-income Americans in particular: a decline in birth rates, higher immigration, more single-parent households, and higher numbers of seniors without adequate retirement security. All four trends, he said, need to be watched carefully for their eﬀect on “the nature of poverty in the United States.”

Doar also highlighted rising healthcare costs as presenting a salient challenge to policymakers in the future, saying, “if we could ﬁnd a way to reduce the cost of healthcare, we could free up dollars to help struggling Americans in more eﬀective ways. And devote more on investments in early learning and childcare.”

Emphasizing the connection to our nation’s ﬁscal outlook, Lopez said that understanding labor force participation trends among diﬀerent groups of Americans will determine “what we see in terms of tax revenues, in terms of success, in terms of earnings. All of this is going to be important for providing a background for where the U.S. will be in the future in terms of its budget situation.”