On March 16, the statutory debt limit will once again be reinstated, freezing the national debt at its current level — just under $20 trillion. This reinstatement will prevent the Treasury Department from borrowing additional funds under standard operating procedures.

Here’s a look at what this means for federal lawmakers and the economy.

Why Is the Debt Ceiling Being Reinstated Now?

In November 2015, Congress and the President agreed to suspend the debt limit through March 15, 2017. During this period, the Treasury has been able to borrow to pay for the government’s obligations under standard operating procedures. But that ability ends with the reinstatement of the debt ceiling.

Barring action from lawmakers to raise or suspend the debt ceiling, the Treasury Department will, once again, begin employing “extraordinary measures” that will enable it to continue borrowing for a limited amount of time.

According to Peterson Foundation estimates, those extraordinary measures can continue for a number of months, and would likely be exhausted in October or November of 2017. At that point, if the debt limit is not raised or suspended, the Treasury Department would be forced to rely solely on incoming cash flows to pay obligations.

What Are the Potential Consequences of Not Raising the Debt Limit?

If lawmakers do not agree on raising or suspending the debt limit before the extraordinary measures are exhausted, there would be severe consequences for both the federal government and the economy. With spending limited to incoming revenue, the federal government could be forced to delay payments to employees, contracts could be violated, and payments to beneficiaries of government programs (including Social Security and Medicare) could be delayed or reduced. Although the Treasury Department would likely continue making timely principal and interest payments on the public debt, worries about the government’s creditworthiness would likely cause interest rates to rise and increase the government’s cost of borrowing.

A federal default of this nature would have serious economic consequences. A study by Macroeconomic Advisers and funded by PGPF analyzed the economic effects of fiscal brinksmanship during the fiscal cliff episode. The study found that even a brief debt limit impasse at that time would push the economy back into recession; an impasse lasting two months could have led to a prolonged economic downturn and eliminated approximately 3 million jobs.1

What Is the History of the Debt Limit?

The debt limit has been raised frequently in the past — more than 80 times since 1960. 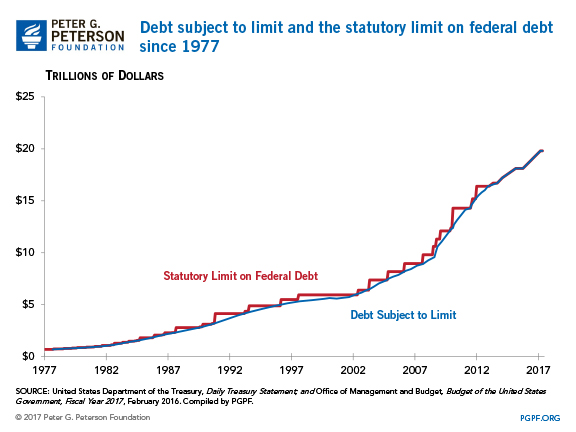 The debt limit has been raised by many presidents and Congresses — both Democrats and Republicans. 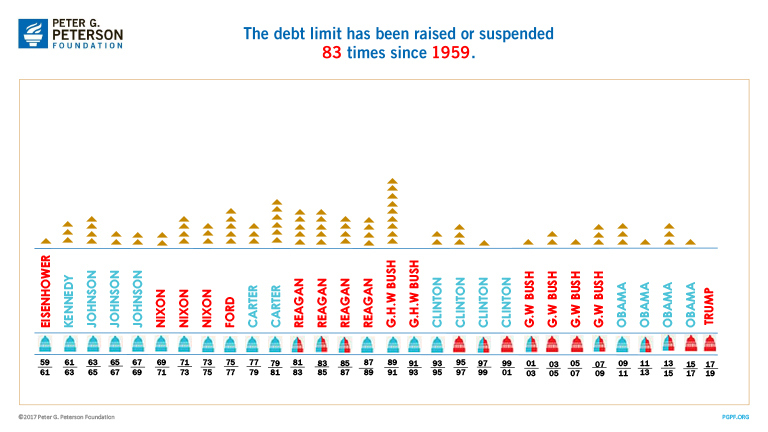 What Are the Effects of These Fiscal Battles on the Economy?

Even if default is avoided, fiscal brinksmanship surrounding the debt limit has negative consequences. The threat of default puts into question America’s willingness to honor its commitments. Not only does the threat of default harm the image of our country’s creditworthiness, it also has an impact on our economy. The Macroeconomic Advisers’ report found that the uncertainty created by fiscal brinksmanship from 2010 to 2013 cost the economy 900,000 jobs. Fiscal uncertainty also hurts the federal budget. The U.S. Government Accountability Office (GAO) estimated that delays in raising the debt limit in 2011 increased the government’s borrowing costs by $1.3 billion in that fiscal year.2

While brinksmanship is a poor way to conduct fiscal policymaking, the debt ceiling is a reminder of the continuing structural imbalances in our federal budget. Since the suspension of the debt ceiling in November 2015, the debt has increased by approximately $1.7 trillion, and there have been no meaningful reforms to our unsustainable long-term fiscal path.

Stabilizing the debt gradually over the long term is a key part of any sound fiscal policy and viable economic strategy for America. Unless we confront these budgetary challenges and close the structural imbalance between spending and revenues, federal debt will climb to unsustainable levels and put America’s economy and future prosperity at risk.

Addressing our long-term fiscal challenges is critical for ensuring that America has adequate resources for investing in our future, protecting critically important programs, and creating robust economic growth and opportunity for future generations. Governing by crisis, engaging in fiscal brinksmanship, and threatening our nation’s creditworthiness are not effective means of addressing our fiscal situation and will make matters worse to the extent that they hurt the economy. Instead, Congress should use the formal budget process as a positive means to develop effective fiscal reforms that address our fiscal challenges and improve our economy.

1 Macroeconomic Advisers, LLC, The Cost of Crisis-Driven Fiscal Policy, October 2013. (Back to citation)

2 Government Accountability Office, Analysis of 2011-2012 Actions Taken and Effect of Delayed Increase on Borrowing Costs, July 2012. (Back to citation)