As Congress returns from its August recess, lawmakers face a to-do list filled with important fiscal deadlines. Here’s a look at the significant issues affecting America’s fiscal and economic future that are awaiting Congressional action in the near term.

Fiscal year 2018 for the federal government begins on October 1, but Congress has not yet passed any of the legislation necessary to fund government operations for the new year. Many observers expect that lawmakers will be unable to pass all 12 appropriation bills required to keep the federal government open before the current fiscal year ends, and will instead resort once again to passing a continuing resolution — a temporary funding measure — for at least some of those bills. If Congress is unable to pass appropriations or a continuing resolution by October 1, portions of the government will shut down until funding is provided.

In addition, appropriations are constrained by the caps on such spending originally established by the Budget Control Act of 2011. The caps for 2018 for both defense and non-defense appropriations are slightly below the levels in place for 2017. Legislation would be necessary to change one or both of those cap levels for the upcoming year or beyond. Legislation would also be necessary to provide supplemental funding for relief and recovery from Hurricane Harvey.

Under regular budget order, the House and the Senate would pass a budget resolution, a blueprint that guides fiscal decision-making in Congress, before passing appropriation bills. A budget resolution is not signed by the president and therefore is not a law, but is important because it provides guidelines for the budget process within Congress. The budget resolution is also the vehicle for the procedure known as reconciliation, which provides an opportunity to make changes to mandatory programs and revenues with as few as 50 votes in the Senate (instead of the 60-vote threshold need to prevent or break a filibuster).

Funding for and Reauthorization of Mandatory Programs, October 1

A few mandatory programs also require legislation to continue their funding. The largest such program is the Children’s Health Insurance Program, which provides coverage mostly for children in low-income families that do not qualify for Medicaid. It was created in 1997 as a partnership between the federal government and states and territories; currently, the program covers 9 million children. Federal funds for the program are scheduled to expire on September 30. If policymakers fail to act, the millions of children enrolled in the program could lose their coverage within the next several months.

Likewise, other mandatory programs are also up for reauthorization and Congress will have to act to extend funding for such programs. In particular, the recent flooding caused by Hurricane Harvey will require additional authority for the National Flood Insurance Program.

In March, the statutory debt limit was reinstated, capping total debt issued by the Treasury at just under $20 trillion and preventing the Treasury Department from borrowing more than that amount. Currently, the Treasury is employing “extraordinary measures” to manage the government’s finances. However, those extraordinary measures are projected to be exhausted in early to mid-October. If the debt limit is not raised or suspended before that time, the Treasury Department would have to rely solely on incoming cash flows to pay obligations. At that point, the government could be forced to delay payments to beneficiaries, employees and contractors; in addition, the potential for default on Treasury securities would raise questions about the government’s creditworthiness and have serious economic consequences. To learn more about the debt ceiling, click here. 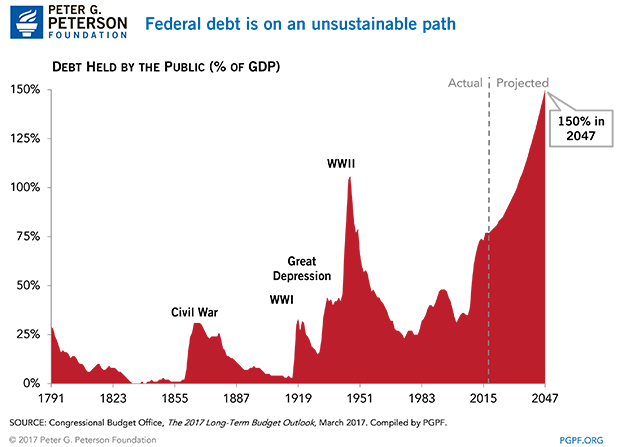 As lawmakers return to Washington, our long-term fiscal outlook remains unsustainable. Federal debt held by the public is already at its highest level since 1950, and the Congressional Budget Office projects that it will reach 150 percent of gross domestic product (GDP) in 30 years — by far an all-time high. Unless policymakers act, CBO concludes that rising debt could jeopardize long-term economic growth, crowd out critical investments, reduce policymakers’ flexibility to respond to unforeseen events, and raise the risk of a financial crisis.

While Congress and the President debate major legislative initiatives this fall, they will face urgent upcoming deadlines that have major fiscal and economic implications for the country. Unfortunately, indecision has forced lawmakers into last-minute maneuvering to avoid a government shutdown or a default. Governing by crisis, engaging in fiscal brinksmanship, and threatening our nation’s creditworthiness are not effective means of addressing our nation’s fiscal challenges.

By resorting to “stopgap” measures, lawmakers squander the opportunity to set budget priorities and address long-term fiscal challenges. That creates uncertainty about our fiscal future and delays the reforms needed to stabilize our debt.

Delaying solutions to our fiscal challenges has real costs to our economy and budget — CBO estimates that the annual cost of needed fiscal reforms would climb by 21 percent if lawmakers delayed action by 5 years. 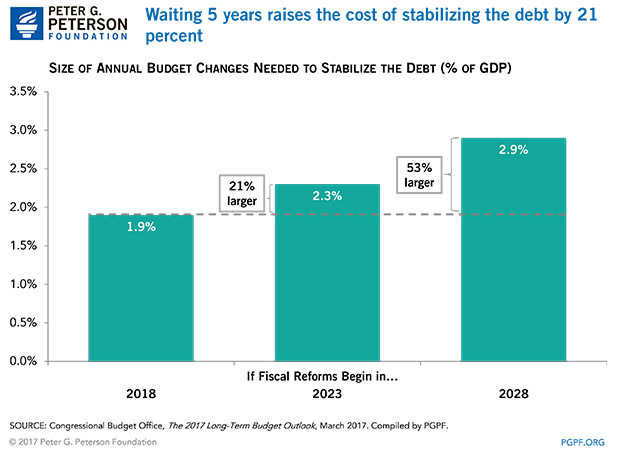 Addressing our long-term fiscal challenges is critical to ensure that America has adequate resources for investing in our future and creating robust economic growth and opportunity for subsequent generations. Congress has an opportunity to use this legislative session to work together to build a strong fiscal foundation for our economy and for future generations of Americans.