For A Stronger Economy, Deal With The Debt

Dealing with our long-term debt can give a needed boost to the U.S. economy. Americans must task their newly elected officials with tackling the nation's debt — and hold them accountable for results.

ur country has been through a lot: wars, financial crises, the deepest recession in generations and a recovery that is still too sluggish. The election is entering the home stretch, and we know that the economy will top the agenda of issues.

Interest costs threaten to crowd out critical investments. By 2040, the federal government will annually devote four times as much to interest as it will to education, R&D and infrastructure combined.

We'll hear a lot of ideas on the campaign trail, but one action in particular can provide a big boost to our economy: dealing with our government's structural debt problem.

One of the reasons the recovery is struggling to take hold is that businesses lack confidence to grow and invest for the future. Individuals, faced with job worries and depressed home values, lack confidence, too.

On our current path, interest costs will take up more and more federal revenue. Eventually, every dollar of revenue would be needed for interest.

The debt crisis is not the fault of either political party. We all share responsibility, and all have a role in reducing our long-term debt. Fixing this problem doesn't mean we need huge, immediate spending cuts or tax increases that could hurt economic growth. Instead, we need a serious long-term plan to deal with the major causes of our growing debt — for example, runaway health care and entitlement costs as baby boomers begin to retire in large numbers and are living much longer; a messy, broken tax system that doesn’t raise enough revenue; defense spending that is not prioritized to 21st-century threats; and ballooning interest payments that threaten to crowd out critical investments in our economy. 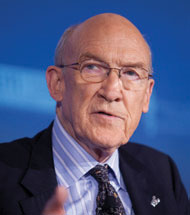 "This isn't about rigid ideological views on taxes or entitlements. It's about facts and math. Both sides need to face up to reality and show some real leadership, and voters are thirsting for that. Our country, our economy and our future depend on it." 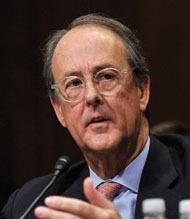 "We face the most predictable economic crisis in our history. Fortunately, it is also the most avoidable. If we want to preserve our ability to make investments that are critical to our economic future, we need to act."

An agreed-upon plan with real, reasonable deficit-reduction targets that gets implemented when the economy strengthens will provide an immediate boost of confidence. Long term, dealing with our debt problem will mean more for public and private investments — including skills training, education, R&D and infrastructure — that build a more prosperous nation, and Social Security and Medicare systems that are sustainable.

The alternative if we don't fix this problem? A slow-growth crisis in which the economy struggles under soaring interest payments, skyrocketing taxes and plummeting investments in the future. Or, a major fiscal crisis, in which sudden, painful cuts hit even the most vulnerable.

Why let that happen when we know how to avoid it?

The leaders we elect can improve our economy by dealing with the debt, but they will have to work together to put us on the path to long-term fiscal health and economic prosperity. And all Americans must hold them accountable for results.

It will take bold leadership and a clear sign of support from the American people. But isn't that what elections are supposed to be about?

State of the Union's Finances — A citizen's guide explaining the enormous fiscal challenges facing America, based on the official financial statements of the U.S. government.

Charts Archive: Fiscal Solutions by the Numbers — Illustrative graphics prepared by the Foundation that help to visualize many of today's pressing fiscal issues.

America Chooses A President and Congress. Now It's Their Turn To Make Some Choices
The 2011 Fiscal Summit: The Solutions Initiative
New Year, New Congress, and a New Chance to Strengthen our Fiscal and Economic Future