The Government Accountability Office (GAO), often described as the government’s watchdog, released its fall update to the Federal Government’s Long-Term Fiscal Outlook on November 15, 2010. In this report, the GAO warns that the federal government is on an unsustainable fiscal path. Under the GAO’s most realistic fiscal scenario, debt held by the public will exceed 109 percent of GDP by 2020. The only other time in the nation’s history that debt reached this level was in the immediate aftermath of World War II. While the economy is still undergoing a fragile recovery, this is not an excuse for further delaying action on putting in place long-term and intermediate-term policy changes aimed at reducing deficits and stabilizing public debt. The report notes that the cost of delaying reform grows every year.

This report presents two fiscal scenarios. The Baseline Extended scenario uses the Congressional Budget Office’s (CBO) August 2010 baseline through 2020, then holds revenue and spending other than debts service constant afterwards. The Alternative scenario uses a more likely set of assumptions. It assumes that all current tax provisions, including the tax cuts enacted in 2001 and 2003, are extended through 2020, Medicare physician payment rates are not reduced as they are in the CBO baseline, and that cost containment measures included in the Affordable Care Act are not sustainable in the long-term. The Baseline Extended scenario produces a more optimistic outlook than the Alternative scenario, but, according to the GAO, both simulations underscore “the need to address the long-term sustainability of the federal government’s fiscal policies. “

The Fiscal Outlook is Continuing to Deteriorate

The report details further the deterioration of the long-term fiscal outlook of in the U.S. government. The GAO calculates the “fiscal gap” as a single measure of the magnitude of the fiscal challenges facing the nation. The fiscal gap is a term that refers to the reduction in spending or increases in revenues necessary to stabilize the public debt as a percentage of the economy (or GDP) at its current level. This difference can be used to calculate the magnitude of revenue increases and spending decreases necessary to stabilize the public debt. This report estimates that under the Alternative scenario, the fiscal gap stands at 9.4 percent of GDP or almost $89 trillion in present value dollars. This would require an increase in taxes over the 75 year period averaging about 50 percent or a 35 percent average reduction in non-interest spending. This report is an update to GAO’s January Long-Term Fiscal Outlook report. In the past eleven months, the GAO projections have worsened. In January, GAO reported the size of the fiscal gap as 9 percent of GDP, or $76 trillion in present value dollars. 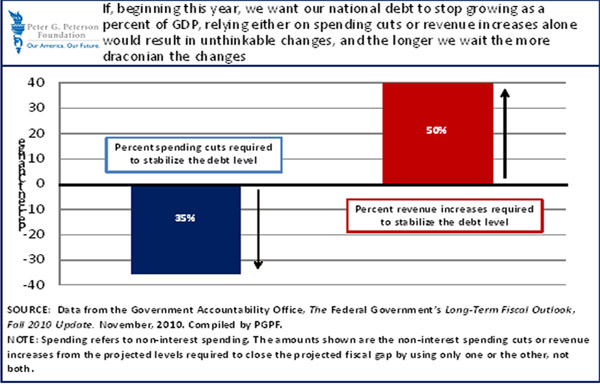 Additionally, the GAO describes a number of worrying developments in its long-term alternative scenario.

According to the GAO, even under the most optimistic set of assumptions contained in this report, the cost-control measures contained in the Affordable Care Act (ACA) are only a first step towards bringing the explosive growth of health care costs under control. Many reports, including reports by the Social Security and Medicare Trustees, the CBO, the Actuary for the Center for Medicare and Medicaid Services, and others from the GAO have expressed concern over the long-term effectiveness of some of ACA’s cost control measures. These concerns are reflected in the differences between the budget deficits in the more optimistic Extended Baseline scenario and the more pessimistic Alternative scenario. Consistent with alternative projections from the Actuary for the Center for Medicare and Medicaid Services and the CBO, the GAO’s Alternative scenario assumes that some of the cost control measures break down after 2020, and health care costs once again begin to grow very rapidly. Under the Alternative scenario, the budget deficit is projected to exceed 16 percent of GDP by 2030. This is compared to a budget deficit of approximately 6 percent under the Extended Baseline scenario.

Not only does the GAO report detail the severity of the fiscal challenges that we are confronting, but it also highlights the high cost of delaying action. The fiscal position of the United States is already under considerable stress from the retirement of the oldest Baby Boomers and the rapidly increasing growth of health care costs. Without prompt action to control the long-term growth in public debt, by 2030, net interest payments will become the single largest spending item in the federal budget.