October 1 marks the beginning of a new fiscal year for the federal government, and policymakers face a number of important fiscal and budgetary issues. Within the next three months, lawmakers must address the debt ceiling and provide additional funding for the government. Without action on the debt ceiling, the federal government could default on some of its obligations soon after November 5. And on December 11, the stopgap funding measure which was enacted on September 30 to prevent a government shutdown will expire.

Lawmakers should use the opportunities presented by the annual budgetary process to set policy priorities and provide more certainty about our nation’s fiscal policy. The stakes are high, for our budget and our economy. Despite recent reductions in short-term deficits, the nation continues to face serious long-term fiscal challenges that threaten economic growth and undermine economic opportunity. To provide a solid foundation for economic prosperity, lawmakers need to come together and agree on a plan that puts our nation’s budget on a sustainable long-term path.

The prior fiscal year witnessed notable fiscal achievements, but none of them addressed our unsustainable long-term fiscal challenges.

Congress also passed a budget resolution for the first time in five years, but did so on a partisan basis and failed to pass regular appropriations bills before the start of the new fiscal year. In fact, the last time lawmakers passed all of its regular appropriations bills before the beginning of the fiscal year was nearly 20 years ago. Although Congress passed a continuing resolution (CR) on September 30 to prevent a government shutdown on October 1, this stopgap measure funds the government only until December 11, 2015. Without additional legislative action by that date, the government will once again face a shutdown.

Lawmakers face a number of urgent tasks over the coming months:

By delaying debates on important matters such as the Highway Trust Fund, Social Security funding and tax policy, lawmakers create unnecessary uncertainty about fiscal policy, limit the options for addressing our fiscal problems, and increase the cost of reforms. There is nothing to gain from the damaging fiscal brinksmanship of recent years. In a study funded by the Foundation in 2013, Macroeconomic Advisers estimated that fiscal uncertainty from 2009 to 2013 raised unemployment by 0.6 percentage points — the equivalent of 900,000 lost jobs.

Moreover, the longer we delay fiscal reforms, the more significant the changes will have to be. Under CBO’s alternative fiscal scenario, PGPF estimates that taking action in 2016 to begin to stabilize the debt would require changes to revenue and/or spending of a total of 3.2 percent of GDP. If action is delayed just 5 years, this number climbs by nearly 25% to 4.0 percent of GDP.

The approaching fiscal deadlines and the congressional budget process provide opportunities for lawmakers to work through their differences, set priorities, and work together on a sensible plan to address vital short term deadlines and implement long term reforms that will put our nation on a more sustainable and prosperous fiscal and economic path. 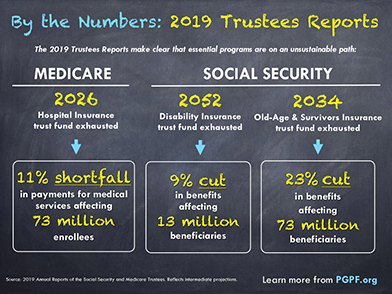 Lame-Duck Deadlines and Long-Term Priorities
Analysis: Understanding the Bipartisan Budget Act of 2015
Analysis: The Numbers Behind The Last-Minute Budget Bill