On September 15th, the French National Assembly (which enjoys a large majority of President Nicolas Sarkozy’s center-right party, UMP) passed a sweeping overhaul of the French retirement system. Most notable and controversial among the reforms were movements to raise the minimum retirement age from 60 to 62 by 2018, and the full retirement age from 65 to 67 by 2023. The reform has sparked a major opposition movement, mobilizing millions of people all over France. If passed, the reforms would bring France’s retirement system more in line with those of many countries in Western Europe and North America.

Much like the Social Security system in the U.S., the French retirement system is a defined-benefit system, and pays its current beneficiaries with money received in taxes from current workers. This is in contrast to a privatized, defined-contribution system like that used in Chile, in which most of the workers’ contributions go into independent funds. The French system essentially transfers the wealth from the younger generation to the older, and thus relies (as does the system in the U.S.) on a high ratio of workers to beneficiaries. This balance is rapidly changing as youth unemployment rates rise, and the global phenomena of generational shifts and increasing longevity set in. There were 4 workers per beneficiary in France in 1960; in 2020, there are projected to only be 1.5. This is an even sharper demographic shift than the one experienced in the United States: in the U.S, there were 5.1 workers per beneficiary in 1960, and 2.5 projected in 2020.

The unions and the political left (led by the Socialist Party) have been leading millions of people in opposition to the reforms that have garnered international media attention. There was a large round of strikes and demonstrations on September 7th throughout the country, and again on September 23rd. The reform will be debated in the Senate starting early October.

Before the reforms, France had enjoyed one of the lowest retirement ages in Europe and North America. As shown in the table below, the reforms would make its retirement age more comparable to Germany, England, and the U.S. Even the Belgian numbers are a bit misleading; in order to qualify for full retirement, you must be 65 and have worked for 45 years (higher than both France’s 41.5, and the U.S.’s 35). 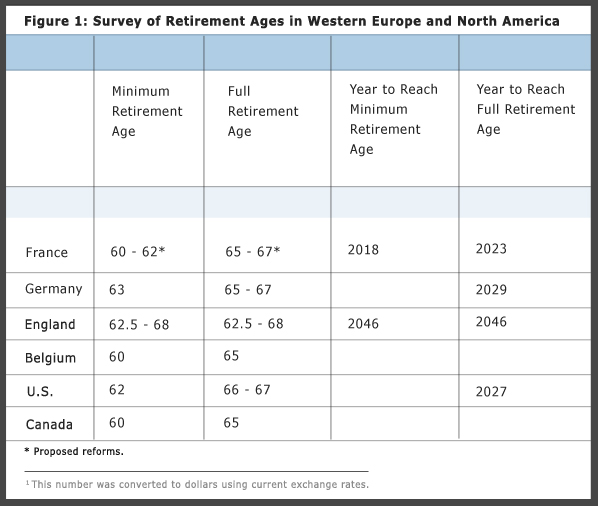 Aging of the Baby Boom Generation