The report measures the fiscal position of state and local governments in terms of their ability to cover their current expenditures using current revenues. GAO reports that to avoid growing fiscal imbalances and to continue complying with balanced budget requirements, state and local governments will be required to make “substantial policy changes.” The budgetary problems facing the states grow even larger over time, according to GAO.

The GAO is an independent, nonpartisan agency that works for Congress. Often called the "congressional watchdog," the GAO investigates how the federal government spends taxpayer dollars. The GAO has published long-term fiscal simulations for state and local governments since 2007. 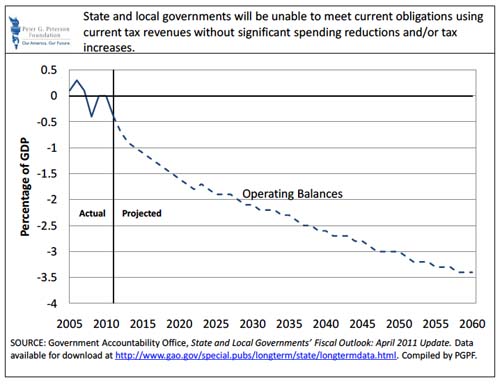 KEY FINDINGS OF THE REPORT

Similar to the case of the federal budget, the rising cost of health care is the primary driver of the long-term fiscal imbalance at the state and local level. State contributions to Medicaid and the growing cost of providing post employment health insurance benefits for state and local retirees will almost double over the next 50 years, rising from about 3.8 percent of GDP in 2011 to 8.4 percent of GDP in 2060. The GAO projects that health care expenditures for state and local governments will continue to grow faster than the rest of the economy, while other expenditures will grow slower than the economy. Revenues also are projected to grow slower than the economy, compounding the projected strain on the fiscal position of state and local governments. As the states implement the Patient Protection and Affordable Care Act and expand Medicaid eligibility, costs associated with expansion of the program will rise, though the federal government will cover most of those costs in the medium and long term. 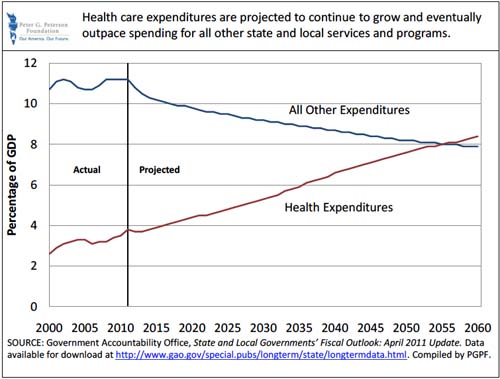 During the recession, state and local pension fund assets lost value, and the slow recovery of these funds to pre-recession levels may place additional fiscal strain on state and local governments in the long-term. The GAO reports that despite a 15.5 percent increase in the value of state and local pension funds from $2.3 trillion at the end of 2008 to $2.7 trillion at the end of 2009 (the last time period for which there is data), pension funds have still not recovered to their pre-recession level of about $3.2 trillion. The GAO estimates that this loss in fund value will require state and local governments to increase annual contributions to about 11.8 percent of wages paid to public employees, which is two full percentage points higher than the 9.8 percent of wages contributed in 2009.