The State Budget Crisis Task Force, led by former New York Lieutenant Governor Richard Ravitch and former Chairman of the Federal Reserve Paul Volcker, today released the first-ever comprehensive report detailing threats to states' fiscal sustainability and actions that can be taken to address them. The report focuses on the fiscal conditions in six heavily populated states — California, Illinois, New Jersey, New York, Texas, and Virginia — which together account for a third of the nation's population and almost 40 cents of every dollar in spending by state and local governments.

"While the extent of the fiscal challenge varies significantly from state to state, there can be no doubt that the magnitude of the problem is great and extends beyond the impact of the financial crisis and the lingering recession," said Ravitch. "The conclusion of the Task Force is unambiguous: the existing trajectory of state spending, taxation, and administrative practices cannot be sustained. The basic problem is not cyclical, it is structural. The time to act is now."

Among the six states highlighted in the report, a common set of major threats to sustainability were identified:

"Our essential goal is to inform the public of the gravity of the issues and the consequences of continuing to postpone actions to achieve structural balance," said Volcker. "Only an informed public can demand that the political systems, federal, state and local, recognize these problems and take effective action. The costs, whether in service reductions or higher revenues, will be large. Deferring action can only make the ultimate costs even greater."

In the report, the Task Force provides recommendations for states to make changes to their procedural approaches, including: improving the quality and utility of financial reporting; adopting multi-year approaches to planning and budgeting; better use of counter-cyclical tools such as rainy day funds; clear disclosure of obligations for pension and other post-employment benefits; improved mechanisms for dealing with local fiscal stress; examining tax systems to improve their adequacy and predictability; and re-examining the fiscal relationship between states and the federal government.

Medicaid spending is far outpacing revenue growth. Based on recent rates, the gap could widen by $23 billion within 5 years.

Federal deficit reduction efforts will hit states hard. For example, a 10 percent cut in grants would cost California and New York, each, more than $6 billion annually.

Many local governments face increasing fiscal problems. This is particularly true in California, where sharp declines in property tax revenue, increases in pension costs, and state aid cuts have contributed to severe fiscal stress — local governments in other states face problems as well.

States do not have proper tools to address these problems: their finances are opaque; they do not prepare multi-year financial plans, fully fund the costs of current services, or fully disclose longer term liabilities. They do not have adequate rainy day funds and their budgeting approaches encourage them to patch budget gaps with temporary resources.

Ravitch and Volcker assembled the Task Force in June 2011 after identifying their mutual growing concern over persistent structural imbalance in state budgets and the continued ability of states to provide basic services, invest for the future and provide for those in need, at a cost taxpayers will support. State and local governments spend $2.5 trillion annually and employ over 19 million workers — 15 percent of the national workforce and six times as many workers as the federal government.

More information, including the official Report of the State Budget Crisis Task Force, is available at
www.statebudgetcrisis.org

Spending on Veterans in the Budget 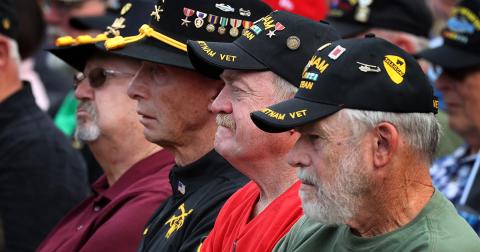 This piece examines spending on veterans within the budget and outlines the factors that have pushed it higher in recent years.