On April 5, 2011, Chairman Paul Ryan of the House Budget Committee released a proposed budget resolution for the fiscal year (FY) 2012. Compared to current law, the Republican staff of the committee estimates that over the next ten years, the chairman’s proposed budget would:

The chairman’s budget aims to shrink the size of government to about 20 percent of gross domestic product (GDP) in 2015 and to 15 percent of GDP in 2050. Over the next 10 years, about 70 percent of those spending cuts would be used to finance additional tax cuts; the rest would be used for deficit reduction.

According to estimates prepared by the House Budget Committee majority staff, the policy changes in the chairman’s proposal would significantly reduce federal debt as a share of GDP. Federal debt would decline to 68 percent of GDP in 2021 and to 10 percent of GDP in 2050. The debt projections for 2050 are based on a long-term analysis of the chairman’s proposal by the Congressional Budget Office (CBO).

The proposal also calls for a fundamental restructuring of Medicaid and Medicare.

The chairman’s proposed budget resolution (also known as the Chairman’s Mark) is the starting point for congressional deliberations over next year’s budget, which begins on October 1.  The Ryan budget resolution is unusual in its scope.  Budget resolutions typically avoid explicit consideration of the long-term budgetary challenges facing the nation. The Ryan proposal joins other comprehensive proposals for addressing those long-term challenges, each of which has chosen a different mix of tax and spending proposals. The recommendations advanced by the National Commission on Fiscal Responsibility and Reform, for instance, had much smaller cuts in spending than Chairman Ryan proposes. However, the commission increased taxes, instead of reducing them(1).

The congressional budget resolution provides a blueprint for spending and revenue decisions for the next fiscal year. In the normal course of the congressional budget process, the House and Senate prepare separate resolutions that are then reconciled in conference. Because the budget resolution is not presented to the President for signature, it does not have the force of law. It does, however, help guide congressional decision-making and serves as a framework for appropriation, tax, and other legislation that would become law. Budget resolutions, however, are not required for the government’s continued financial operations, and in many recent years, one or both houses of Congress have failed to adopt a resolution.

1 Other comprehensive fiscal plans have been released by the Bipartisan Policy Center and the Committee for a Responsible Federal Budget.

WHAT IS THE OUTLOOK FOR DEBT AND DEFICITS? 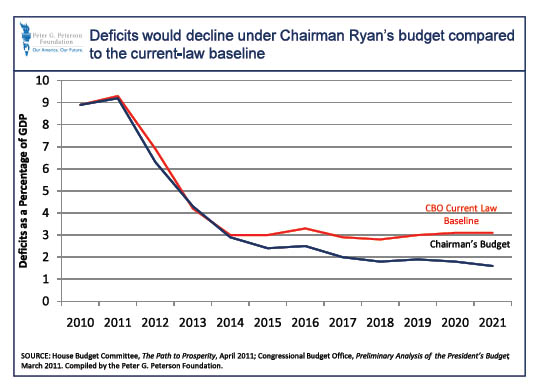 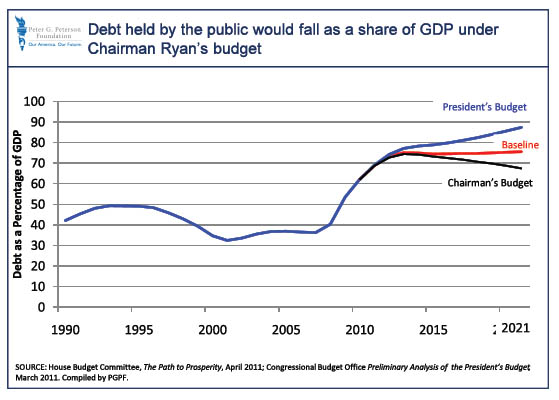 WHAT ACCOUNTS FOR THE DECLINE IN DEBT?

Federal debt would decline under Chairman Ryan’s proposal because he proposes substantial spending cuts to shrink the size of government. According to the estimates prepared by the House Budget Committee staff, the chairman would reduce spending by $5.8 trillion over ten years, compared to current law. Compared to the president’s budget, the chairman’s proposal would reduce spending by $6.2 trillion (2).

As a result, revenues under the Ryan proposal would not exceed 18.3 percent of GDP at any point during the next ten years.  By contrast, under current law, revenues, largely fueled by the expiration of the individual tax cuts originally enacted in 2001 and 2003, would rise to 20.8 percent of GDP.

2 The president’s FY 2012 budget would increase spending by about $400 billion over the ten-year period compared to current law, according to the Congressional Budget Office.

Chairman Ryan’s budget assumes that Congress will enact several measures that would reduce revenues by $4.2 trillion over the next ten years. The most important changes in his budget are:

The committee report on the chairman’s budget indicates that the reduction of top tax rates to 25 percent would be fully financed by broadening the tax base and eliminating various tax expenditures. However, the report does not specify which tax expenditures would be eliminated; those decisions would be left to the House Committee on Ways and Means. Without those offsets, the proposal would reduce revenues (and increase deficits) more than the committee has estimated. 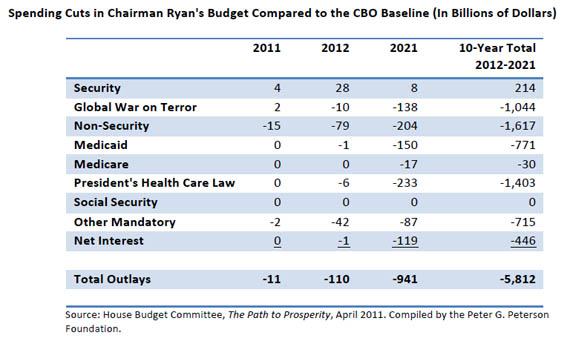 Although repealing the Affordable Care Act would reduce outlays, it would reduce revenues by an even larger amount, according to CBO. Indeed, CBO found that repealing the health care reform would actually increase the deficit by $210 billion over 10 years.

WHAT ARE THE LONG-RUN IMPLICATIONS OF THE CHAIRMAN’S BUDGET?

The CBO estimates that the chairman’s proposal would greatly reduce the long-term pressures on the federal budget.  The nonpartisan agency estimates that if the chairman’s proposals were enacted and maintained, federal debt would decline to 10 percent of GDP by 2050.  However, achieving that goal depends on maintaining the fundamental restructuring of Medicaid and Medicare that the chairman has outlined in his proposal in order to slow the growth of federal health care spending.

As discussed above, the chairman would restructure the Medicaid program as block grants to states. The growth in the block grants would be limited to the rate of inflation and population growth. Because Medicaid spending is currently projected to grow much faster, the reform is expected to slow Medicaid costs significantly.

For Medicare, the chairman would fundamentally transform the program from its fee-for-service model to a “premium support” model beginning in 2022. Under this reform, the government would make a premium-support payment to an approved private insurance plan that was chosen by the Medicare beneficiary.  (The proposal also would gradually increase the eligibility age for the Medicare program from age 65 in 2021 to age 67 in 2033). The premium support would partially subsidize the purchase of insurance and would be adjusted so that wealthier beneficiaries received smaller subsidies, sicker patients received larger payments, and lower-income seniors received more help to cover out-of-pocket expenses. Current Medicare beneficiaries would have the option to join the new premium support system or continue with the current program. Because the rate of increase for the government’s premium support would be limited, the reform would slow the growth of Medicare spending over time compared to current law. However, CBO also found that under the proposal, most elderly people would pay more for their health care than they would pay under the current Medicare system.

“Chairman Ryan deserves significant credit for looking beyond the current fiscal year and leading an effort to put forward a budget proposal that addresses many of the drivers of our long-term debt. With the increasing recognition that our fiscal situation is unsustainable, we are now beginning a national dialogue on solutions. There are many points of view on how we should address our long-term debt and deficits, so now is the time for elected leaders who have different ideas to come forward with their own plans to address our challenges. This process will not move forward without leadership.

“President Obama and Congress must work toward agreement on a set of solutions that build a solid fiscal foundation to ensure economic prosperity for our future. Any viable plan must address all of the drivers of our long-term debt and be done in a way that maintains a social safety net for Americans who need it.  We can no longer afford inaction. ”