Why Defense Matters For Deficit Reduction

The United States, by far, spends the greatest amount on military (in nominal terms) than any other country. In 2008, the U.S. spent $607 billion on defense, more than the next 14 largest defense budgets combined (refer to Figure 1). Since then, the defense budget has only grown, with an estimated $689 billion spending total in 2010, according to the Congressional Budget Office. Given the size of our deficit and growing national debt, efforts at fiscal reform cannot afford to turn a blind eye to military expenditures.

The Sustainable Defense Task Force, formed in response to a request from Representative Barney Frank (D-MA), working in cooperation with Representative Walter B. Jones (R-NC), Representative Ron Paul (R-TX), and Senator Ron Wyden (D-OR), recently released the report,“Debts, Deficits and Defense: A Way Forward,” addressing potential areas of cost reduction in the Department of Defense (DoD) budget 1. The report provides various options, which altogether are estimated to reduce defense spending by $960 billion between 2011 and 2020. 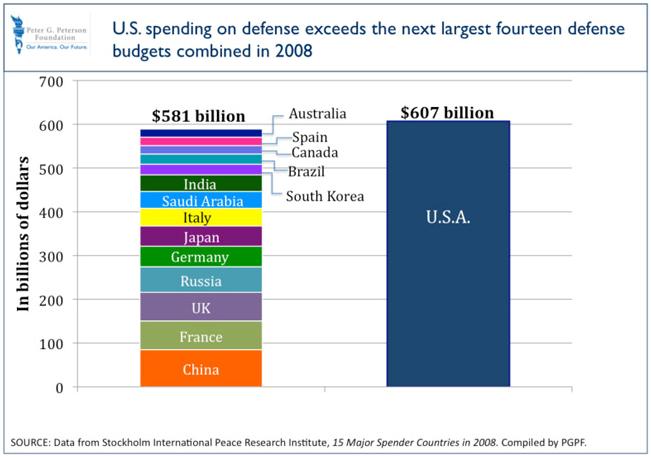 As the largest component of discretionary spending (or programs determined by the President and Congress in annual legislation), defense spending now constitutes about 20 percent of the total federal budget. Yet the Department of Defense continues to be one of the few federal agencies that is not ready for an independent audit. This makes it more susceptible to fraud and waste. The Pentagon has recently set a 2017 deadline for audit readiness, but this is hard to enforce, and should be reviewed and possibly shortened in light of deficit concerns.

Our national security is a vital priority, so it is understandable that citizens and politicians alike are hesitant about touching defense spending. However, combating waste in the Pentagon, and cleaning up redundant and obsolete military programs would not necessarily compromise our national security. Reevaluating our national security priorities to create a force more focused on 21st-century threats could enhance our safety, as well as eliminate programs that needlessly contribute to rising federal spending and deficits.

Defense spending in all areas needs to be examined. Certainly procurement, acquisitions and Research and Development (R&D) have great potential to contribute to a rise in spending, and should be examined carefully. Personnel costs have also risen sharply in recent years, along with rising health care costs for military personnel and veterans, and the need to recruit an all-volunteer force to serve in wartime.

The 19 options provided in the Sustainable Defense Task Force report are categorized into six broad areas:

3. Procurement, research and development – potential for nearly $139 billion in savings

5. Reform of Department of Defense maintenance and supply systems – potential for $13 billion in savings

6. Command, support, and infrastructure expenditures – potential for $100 billion in savings

The report thus covers all areas of DoD spending. The authors suggest rolling back Army and United State Marine Corps (USMC) growth as the wars in Iraq and Afghanistan end, which would save an impressive $147 billion over the next decade. The report also proposes reducing the US Navy fleet down to 230 ships and 8 air wings, which would save $127 billion. This would mean fewer war ships operating “permanently on station,” and a great emphasis “surging naval power as needed.”

On the procurement front, the report proposes canceling certain weapons programs such as the F-35 and MV-22 Osprey, which are seen to be overly expensive and less capable than hoped, and replacing them with less costly alternatives. Yet another major cut proposed by the task force is reducing the current US nuclear arsenal to 1000 warheads and 7 nuclear submarines, and cancelling the Trident II ballistic missile system. Instead, the report suggests adopting a “dyad” of land- and sea-based missiles.

The Task Force also addresses the controversial but unavoidable issue of personnel costs by proposing changes in how military pay raises are set and increases in health care fees and co-pays for some former military personnel aged 38-65. The estimated savings in this area are $120 billion over the next decade. These are understandably difficult measures to implement, as no government official wants to be seen as anything less than supportive of our troops.

The report also covers support, maintenance and infrastructure costs, which it suggest streamlining, consolidating and privatizing. Reductions in force structure and procurement would further reduce the demand on support services and infrastructure.

The report recognizes its own limitations, calling the above options “ad-hoc steps.” It emphasizes the need for broader systemic reform, stemming from a rethinking of our national security strategies and priorities. The authors underline the need for the military to focus on the most pressing threats and commitments, and to use the resources at its disposal in a cost-effective way.

1. The Pentagon should get its financial books in better shape . Preparing for a financial audit will allow the Department of Defense to accurately track its assets and expenditures.

2. DoD should provide reliable cost estimates all key missions and activities, which will allow determine how well its expenditures match up to the national security objectives laid down by the President and Congress.

3. DoD should strengthen acquisition reform, as the current acquisition process has resulted in a large number of unaffordable systems that are better suited to a strategic environment that no longer exists. Non-war-related spending on procurement, research and development has increased 75 percent in real terms over the last decade. Major weapons programs are suffering $300 billion in cost overruns.

Adopting these solutions could have a measurable impact in alleviating our fiscal crisis. There are further steps that Congress and the military can take to ensure that no portion of the defense budget is unjustified or badly allocated:

1. Congress could also examine the system of compensating military contractors in more detail, to make sure that expensive bonuses are not awarded to contractors who fail to meet expectations, and that competitive bidding procedures are followed.

2. In approving the defense budget, Congress should keep an eye on the Government Accountability Office’s 2009 High Risk Report, which listed 30 federal programs that had the highest risk of fraud, waste, abuse, or failing to achieve their objectives – 15 of which were related to the DoD.

3. Auditing the Pentagon would make it less acceptable for members of Congress to vote to develop expensive weapons programs unnecessary to the country’s safety simply to create jobs in their district.

4. Another step in this direction would be the creation of a Chief Operating Officer or Chief Marketing Officer position at the Pentagon, which currently does not have a senior official in charge of improving business practices and assessing performance. This position should be at the same level as deputy secretary, to allow it the teeth to implement real changes.

A fiscally responsible defense strategy would identify the most important and real threats and focus on allocating resources to those priorities. One issue that Pentagon officials must consider is whether our nation is well-equipped enough to deal with the 21st century realities of biological warfare, chemical weapons, cyber-terrorism. Assessing the effectiveness of defense spending in these areas is a key priority that the Pentagon cannot afford to delay. Our national defense strategy should be more future-focused, rather than responding to present funding requests as they rise. 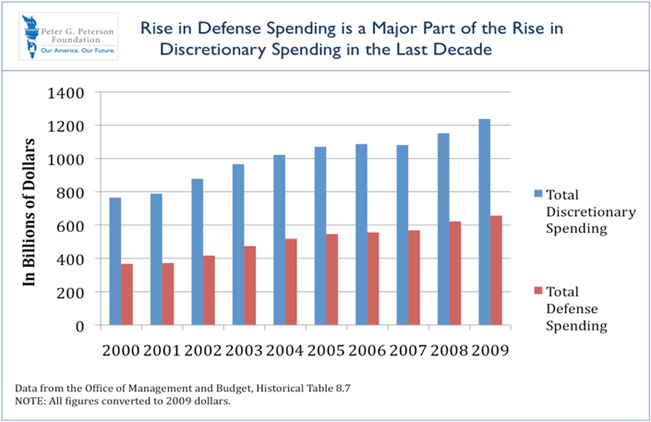 Evaluating defense spending is thus a crucial step in deficit reduction efforts. It is worth keeping in mind that our rising deficits have led to a dependence on foreign lenders, which is not in the interest of our national security or long-term economic health. As Defense Secretary Robert Gates has said, the United States can “only be as militarily strong” as it is “economically dynamic and fiscally sound.”

Given the magnitude of our deficits, defense spending, a key component of the federal budget as a whole, should not be considered off the table in efforts to reduce the deficit. By openly and strategically evaluating the Pentagon’s budget, the government can generate significant savings while maintaining the military’s ability to defend the nation.