I. What is the Federal Budget?

I. What is the Federal Budget?

Each year, the President and the Congress make decisions and establish the policies that determine how the federal government will collect revenues (primarily in the form of taxes) and how it will spend that money on federal programs and services. These decisions, taken together, make up the federal budget. It provides guidelines in the legislative process for spending and revenue levels for given years.

In 2010, the federal government spent over $3.4 trillion (more than $11,000 per person), but collected just $2.2 trillion (less than $7,000 per person) in revenues. That difference, the amount that spending exceeds revenue, is called a deficit. If the government spends less money than it collects it creates a surplus. In 2010, the federal deficit nearly reached $1.3 trillion. Each year that the government runs a deficit, it must borrow funds. That amount gets added on to our gross federal debt of more than $13.6 trillion, which reflects the total amount of money that the government owes. That amount gets added on to our debt held by public (money owed to individuals and entities outside of the government) stood at just over $9 trillion.

Because the value of money changes over time, it is helpful to compare the deficit and debt to the recession. Since the Great Depression federal deficits are more the norm than the exception. In the last 40 years alone, the budget has run deficits in all but four years, averaging 2.6 percent of GDP. Larger deficits put the budget at risk of incurring interest costs that grow faster than the economy, creating greater and greater pressure on the budget, increasing federal borrowing to a point that eventually could crowd out private investment and lower future standards of living. The Congressional Budget Office (CBO) estimates that if the projected deficits do cause crowding out of private investments, within the next two years, economic growth could slow to the point where national output per person stops increasing, and in twenty five years CBO estimates that there would be about $10,300 per person less to go around (see Figure 1). 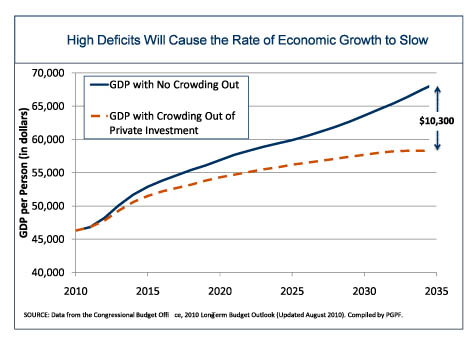 Federal revenue comes primarily from taxes. In 2010, total federal revenues were about 14.7 percent of GDP, noticeably lower than average revenues over the previous 40 years (approximately 18.2 percent of GDP). Revenues in 2009 and 2010 are well below the historical level as a result of the deep recession and high unemployment facing the U.S.—which has depressed economic activity and substantially decreased the amount of income and payroll tax receipts.

Federal spending in 2010 was 23.5 percent of GDP, well above annual average over the previous 40 years (about 20.8 percent of GDP) as a result of measures designed to stimulate the economy and increases in programs like unemployment compensation and other income support programs due to the recession.

Federal expenditures are divided into discretionary and mandatory spending:

Figure 2. Spending and Revenue in the Federal Budget 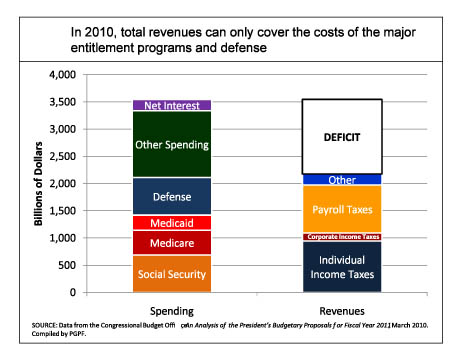 Each February, the President submits a budget to the Congress that details the Administration’s priorities for federal programs, including recommendations for funding discretionary and mandatory programs and changes to tax policies. The budget includes projections for the upcoming budget year, which begins on October 1, and four or more subsequent years of spending, revenues, and deficit and debt levels. For comparison, it also shows amounts for the prior year and the year currently underway, which the President can also propose to modify. The House and Senate are not required to follow the President’s budget, but they often use it as a starting point in drafting their own budget (the budget resolution).

Congressional authorization committees draft legislation that shapes the design and funding levels for federal programs. For entitlement and other mandatory programs, the authorizing legislation determines how much the programs will cost. Once enacted, federal resources are used as directed by that legislation.

The House Ways and Means Committee and the Senate Finance Committee have jurisdiction over tax legislation and many mandatory programs. The Congress uses a procedure called “reconciliation” to instruct the various authorizing and tax committees to draft legislation that meets –or reconciles—revenue and mandatory spending levels to those established in the budget resolution.

As with any legislation, disagreements between House and Senate budget bills are resolved by a Conference Committee; the conference agreement is voted upon in both Houses of Congress, and then sent to the president for signature. For more detail on the budget process, click here.

In 2010, the U.S. debt exceeds 60 percent of GDP. Some economists believe that maintaining a public debt at or below 60 percent of the size of the economy is ideal. That debt level is an internationally recognized standard by the European Union. At the conclusion of World War II, America’s public debt stood at a whopping 113 percent of GDP. Thanks to steady growth due to America’s post-war dominance and return to a peacetime economy, the debt to GDP ratio dropped by 25 percent in 1975. Since then the debt to GDP ratio has ranged between 30 percent and 50 percent. It now stands at its highest levels since the end of the Korean War.

More troubling than current deficit and debt levels are future projections. If policies don’t change dramatically, we are heading towards deficit and debt levels that are clearly unsustainable. CBO projects that the deficit will reach 19 percent of GDP by 2040—approximately the same size as projected total revenues—and the debt will rise to 233 percent of GDP. At that point, interest on the debt is project to be 11 percent of GDP, well over half of projected revenues. Combining those interest payments with Social Security, Medicare, Medicaid, and new health insurance subsidies will add to more than 29 percent of GDP, or 50 percent more than projected revenues. It is clear that within 30 years the federal government will find it much harder to meet other critical national needs.

Figure 3. Historical and Projected Debt Levels as a Percentage of Overall Economy 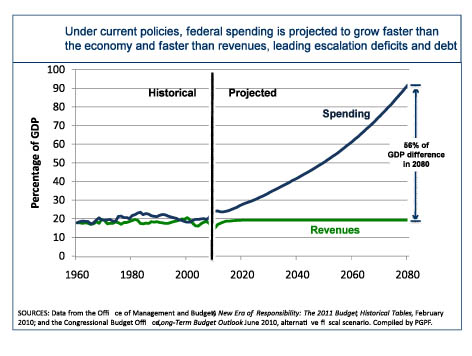 Spending as a percentage of GDP has grown from its historical average of 20 percent of GDP over the last 50 years to roughly 24 percent of GDP in 2010, and is projected to reach 39 percent of GDP in 2040 under current policies. The three major entitlement programs (Social Security, Medicare and Medicaid) are the primary drivers of that long-term growth. The twin factors of a rapidly aging population, increased longevity and the rapid growth of health care costs drive the growth of entitlement spending. For more information on spending, click here .

During the Great Depression, tax revenues averaged only between 3 and 7 percent of the total economy. Revenues rose sharply at the beginning of World War II, and remained between 15 and 20 percent between 1945 and 1960. Historically, since the 1960s, federal revenues have averaged around 18 percent of GDP. In 2009 and 2010, they are lower, because of the recent economic downturn. For more information on revenues, click here.

The Office of Management and Budget (OMB) is part of the Executive Office of the President. The Director of OMB is a cabinet-level appointee, chosen by the President and confirmed by the Senate. Although most OMB staff are career civil servants, OMB is the President’s budget office and is responsible for developing, coordinating and managing budget, legislative, management, and regulatory activities.

The Congressional Budget Office (CBO) is the Congress’ budget office. The Congress appoints the Director of CBO to a four-year term. CBO is non-partisan. Its role is to provide independent analyses of budget and other policy proposals and to support the Congress in its legislative activities.

The Government Accountability Office (GAO) is known as the “Congressional Watchdog”. The head of GAO, the Comptroller General of the U.S. serves a 15-year term. The position is chosen by the President and confirmed by the Senate. GAO is non-partisan. Its role is to help improve the performance and ensure the accountability of the operations of the federal government.