What Is the Earned Income Tax Credit?

The earned income tax credit (EITC) is a part of the tax code aimed at reducing poverty. It was first enacted in 1975 on a temporary basis amid broader debates about welfare reform and had the primary goal of encouraging people to obtain employment. Originally designed to target low-income working families with children, the EITC has since expanded to include middle-income families and, on a much more limited basis, those without children.

The EITC works by reducing an individual’s tax liability, meaning that it reduces the amount of taxes owed. It is also refundable, so if an individual’s liability is smaller than their tax credit, they will receive the difference in the form of a refund.

About 25 million people, or nearly 80 percent of those eligible, received the EITC in 2019, the most recent year for which data were not affected by distortions resulting from the coronavirus (COVID-19) pandemic. The total cost of the program was $70 billion in that year.

How Does the EITC Work?

Workers receive a credit equal to a percentage of their earnings, up to a maximum amount. The credit increases with income up to a certain threshold, stabilizes, and then phases out. For 2020, the maximum EITC for a single person with one child was $3,584; the maximum credit for a childless worker was $538. The maximum EITC and income thresholds are adjusted each year for inflation. A temporary special rule in response to the COVID-19 pandemic allows taxpayers to use their 2019 earned income if it is greater than their 2020 earned income to determine their 2020 EITC.

The American Rescue Plan Act (ARPA) temporarily expands the EITC for childless workers for 2021 only, which will apply when individuals file their tax returns in early 2022. The legislation:

In addition to the federal EITC, 30 states, the District of Columbia, Guam, and Puerto Rico have EITCs. State EITCs provide additional benefits by reducing an individual’s liability for state income taxes. Those credits are similar to the federal credit, but their eligibility standards, credit amounts, and refundability vary.

The EITC is structured to benefit those at the lower end of the income distribution the most. Recipients of the EITC tend to work in the retail trade, healthcare, food service, and accommodation industries. Because benefits have been targeted toward those with children, only 3 percent of EITC benefits in previous years have gone to childless workers. Approximately one-third of recipients also receive benefits from the Supplemental Nutrition Assistance Program.

Effects of the Credits

One concern about the EITC is that it has a high error rate; the Internal Revenue Service (IRS) has estimated that between 21 and 26 percent of EITC claims contain errors. As a result of that error rate and the cost of the program, some research questions the effectiveness of the program.

However, other research supports the EITC’s success in reducing the poverty rate, including the child poverty rate, which nevertheless remains a stubborn challenge in the United States. A significant amount of research suggests that children who grow up in poverty have worse outcomes than those who do not. After Medicaid, the EITC is the third-largest program that benefits children and is a significant tool for reducing child poverty. When measuring the effects of the credit on children, the EITC is often paired with the Child Tax Credit, a tax credit that helps ease the financial burden of having children. According to research by the Center on Budget and Policy Priorities, the two credits lifted 9.4 million people out of poverty in 2013, including about 5 million children.

Research from Harvard University, Columbia University, and the National Bureau of Economic Research suggests that the EITC may also improve mental health in mothers, promote better health outcomes in children, and have long-term positive effects on children’s educational attainment and potential future earnings.

Finally, the EITC may also have an effect on the labor market. During the early 1990s, the amount of the credit was increased and the program expanded to include childless workers. Some research has examined those changes and most found it led to an increase in the employment rate of single mothers.

Tax Credits and the Budget

The EITC cost $70 billion in 2019, the most recent year for which data are not affected by distortions resulting from the pandemic. The combination of the EITC and the Child Tax Credit were equal to 4.3 percent of total federal outlays in that year, representing a fraction of the cost of other major programs. The Joint Committee on Taxation estimates that the temporary expansion for childless workers will cost $12 billion.

A recent study from Rutgers University suggests that the net budgetary cost of the EITC may be lower than previously estimated. The study aimed to determine whether the credit increased or decreased overall public assistance usage by analyzing the effect the credit had on beneficiaries’ usage of unemployment and disability insurance, the Supplemental Nutrition Assistance Program, and public housing. The authors estimated that the EITC’s net cost is approximately 17 percent of its budgetary cost, a result of increased tax collections and decreased spending on other programs.

What Reforms to the EITC Have Been Proposed?

The EITC is a public policy tool that is generally considered effective. By tying the value of the credit to income through its phase in, the EITC encourages people to remain employed. And gradually phasing out the benefit at higher income levels mitigates the “cliff effect,” where additional earnings would trigger a loss in benefits that would make remaining in a job less attractive economically.

Generally, reforms to the credit involve addressing the following concerns:

The EITC provides assistance to low-income families while encouraging heads of household to remain in the workforce. Addressing poverty continues to be a challenge and the EITC is an important measure to help combat it. 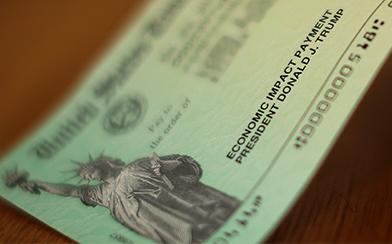 Three sets of stimulus checks have been issued to eligible recipients as part of the pandemic relief. Each set of payments have been slightly different.