Over the past two decades, falling interest rates have saved Washington trillions of dollars on its debt payments and brought complacency regarding the escalating federal debt. An inflation rate surging to 9.1 percent has already begun pushing interest rates upward — and these higher interest rates threaten to bury the federal budget, with damaging economic consequences.

Rising inflation does not, by itself, dramatically damage the federal budget. It produces more tax revenue (not all parts of the tax code are inflation-adjusted), and also automatically raises federal spending formulas. The Office of Management and Budget (OMB) estimates that these higher revenue and spending levels largely cancel each other out in terms of budget deficits.

The real potential danger to the federal budget comes from permanently higher interest rates that persist long after inflation has been defeated. The Federal Reserve has raised its federal funds rate from zero to 2.5 percent, yet will likely have to go much higher to crush inflation. And once inflation is defeated, a more vigilant Fed is unlikely to drop rates back within the zero-to-2.5 percent range that has prevailed over the past 14 years.

Inflation’s legacy of higher real interest rates poses a significant danger to the federal budget. Indeed, the surprising three-decade decline in interest rates has been the main reason why spiraling federal debt has not yet induced the debt crisis that economists have long warned. Between 1997 and 2021, the national debt held by the public leaped by nearly 500 percent, from $3.8 trillion to $22.3 trillion. Yet the annual net interest costs to the federal government rose by only 44 percent, from $244 billion to $352 billion. Had the 1997 interest rate continued, today’s annual interest expenses would be $1 trillion higher (or more, given the larger national debt accumulated from decades of higher interest costs).

Instead, falling interest rates minimized budget deficits, and fed the misconception that government debt is essentially free. For the past few years, short-sighted lawmakers, economists, and columnists have demanded that Congress take advantage of low interest rates by engaging in a massive borrowing spree. Indeed, President Biden’s enormous spending agenda was often justified by the low interest rates on government borrowing.

But this case never made sense for two reasons. First, Washington was already projected to add $100 trillion in baseline deficits over the next three decades due primarily to Social Security and Medicare shortfalls. Even with low rates, interest costs were projected by the Congressional Budget Office (CBO) to become the most expensive item in the federal budget and consume half of all tax revenues within a few decades. Additional borrowing would deepen the hole.

Second, Washington never locked in the recent low interest rates. In fact, the average maturity on the federal debt has fallen to 62 months. If interest rates rise at any point in the future, nearly the entire escalating national debt would roll over into those rates within a decade. Consequently, continued massive federal borrowing means gambling America’s economic future on the hope that interest rates never rise again in the future. And there is no backup plan if rates do rise

Unfortunately, we are now getting a taste of the federal cost of higher interest rates brought by inflation. In early 2021, CBO projected that the average interest rate paid by Treasury on the federal debt would gradually rise from 1.5 percent to 2.4 percent over the next decade. Now, they project that rate to rise to 3.1 percent over that period. As a result, the latest CBO budget baseline forecasts that, a decade from now, the $1.2 trillion cost of annual federal interest payments will exceed the defense budget, and represent a record −3.3 percent of the economy. And that is the rosy scenario of a strong economic recovery, no new spending expansions, and the 2017 tax cuts expiring on schedule.

There is reason to believe that interest rates could rise even further. Historically, Washington’s interest rate has roughly approximated the yield on the 10-year Treasury bond. That rate has already jumped from 1.5 percent to nearly 3 percent since early 2021. Beyond the aforementioned legacy of inflation, the government’s interest rate could continue rising for several reasons:

These factors make it even more important that inflation not further accelerate interest rates.

The Cost of Rising Interest Rates

What if the government’s interest rate surpasses the CBO’s projected 3.1 percent rate a decade from now? Each additional percentage point would cost the federal budget $2.6 trillion over the decade, and $400 billion annually by 2032. That would far exceed the cost of the 2017 tax cuts, and approach the cost of President Biden’s original Build Back Better proposal. It would be enough money to double federal spending on veterans’ health care as well as highways and transit, and still offer families a $300 annual tax rebate. Instead, that taxpayer expense would merely pay bondholders. And that is all from just one percentage point in higher interest rates.

Alternatively, an interest rate rise of two percentage points over the baseline would bring $3 trillion annual budget deficits within a decade even with peace, prosperity, and no new federal initiatives.

The long-term cost is even more dire. Over the next three decades, interest rates exceeding the CBO projection by even one percentage point would add $30 trillion in additional interest costs — which is the equivalent of funding an additional defense department. Within three decades, interest would consume 70 percent of annual taxes, drive budget deficits to 18 percent of the economy, and push the national debt to nearly 250 percent of the economy. Additional rate increases would produce dramatically worse results.

Instead, Washington is gambling its fiscal future on the hope that interest rates paid on its debt will never again reach levels like the five percent rate that prevailed as recently as 2008. And there is no backup plan if interest rates rise. If the debt truly expands by $114 trillion over the next three decades, as projected in the CBO baseline, then any small interest rate rise will bring enormous costs. And the Social Security and Medicare shortfalls driving this baseline debt surge will not be easily reversible with 74 million retiring baby boomers reaching their 70s and 80s over that period and increasingly unable to absorb any significant reforms to these programs.

Fiscal policy is not the best tool to fight inflation. The degree of spending cuts or tax increases needed to significantly reduce inflation likely exceeds political plausibility. Fiscal policy also moves through the economy slowly. Consequently, monetary policy will likely have to take the lead fighting inflation, albeit by painfully slamming the brakes on the economy and hiking unemployment. Congress and the Administration can assist in fighting inflation by avoiding new fiscal expansions, and by pursuing pro-growth reductions in tariffs, ethanol mandates, infrastructure red tape, and Buy America provisions. These policies would allow the Federal Reserve to use a lighter brake pedal, and maintain lower interest rates than otherwise.

While the aforementioned short-term danger is inflation hiking interest rates (even after the inflation has been defeated), the long-term danger is high interest rates bringing inflation — a reverse in the order of causation. As mentioned above, each one-percentage point rise in interest rates above the CBO baseline adds $30 trillion in federal interest costs over three decades. In that case, would Congress and the president really commit political suicide by pursuing even a fraction of the necessary offsetting tax hikes and spending cuts? Or would they simply push the Federal Reserve to keep interest rates low, even if that means inflating the economy with new dollars? That latter policy — known as fiscal dominance — already took place during World War II until the early 1950s. The Federal Reserve is not immune to political pressure, and could even face a legislative mandate to bail lawmakers out of a debt crisis. A member of the Federal Reserve’s board of governors recently pledged to resist fiscal dominance pressures, but as the debt rises over the next few decades, the pressure may become irresistible.

The best way to solve a debt crisis is to avoid one in the first place. This includes reining in mounting baseline deficits, and practicing basic risk management to protect the federal budget from the consequences of rising interest rates at any point in the future. Treasury should more aggressively shift towards longer-maturity bonds to lock in the current interest rates wherever there is a notable risk of higher future rates. Lawmakers must also stop digging the hole deeper with expensive new legislation, and gradually close the Social Security and Medicare shortfalls driving long-term deficits. Any austerity should be imposed gradually to maintain economic growth and the tax base.

Inflation does not directly endanger Washington’s fiscal outlook. However, it threatens to leave a legacy of higher real interest rates that persist long after inflation has been defeated. Those higher interest rates — which may be pushed even higher by other structural economic factors — threaten to collide with worsening federal debt to push Washington towards a fiscal crisis.

The current inflation surge that shocked economists and markets should remind policymakers that markets are indeed unpredictable. The president and Congress cannot easily control future inflation or interest rates, but they can influence the size of the federal debt that will be subject to those rates. With the possibility of standard interest rate fluctuations pushing budget deficits to nearly $3 trillion within a decade, lawmakers should craft a responsible fiscal policy based on gradual, sustainable, deficit reduction, and with an eye on maintaining low inflation. 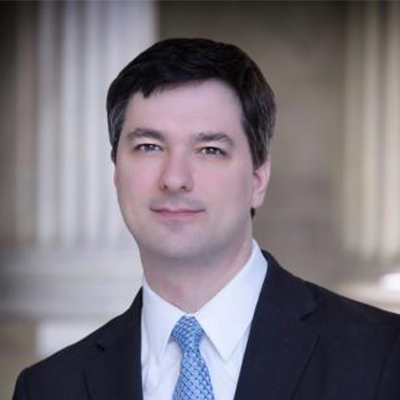 Brian Riedl is a senior fellow at the Manhattan Institute, focusing on budget, tax, and economic policy. Previously, he worked for six years as chief economist to Senator Rob Portman (R-OH) and as staff director of the Senate Finance Subcommittee on Fiscal Responsibility and Economic Growth. Before that, Riedl spent a decade as the Heritage Foundation’s lead research fellow on federal budget and spending policy. He also served as a director of budget and spending policy for Marco Rubio’s presidential campaign and was the lead architect of the ten-year deficit-reduction plan for Mitt Romney’s presidential campaign. Riedl’s writings have appeared in dozens of publications, including the New York Times, Wall Street Journal, Washington Post, Los Angeles Times, and National Review; and he has appeared as a guest on all major news networks. Riedl holds a bachelor's degree in economics and political science from the University of Wisconsin and a master's degree in public affairs from Princeton University. Follow him on Twitter at @Brian_Riedl.