Though many argue that we face a binary choice between either growing our economy or stabilizing our long-term fiscal position, in a new paper commissioned by the Peter G. Peterson Foundation, a bipartisan team of leading economists explores how policies to achieve economic growth and fiscal stability are related and complementary. In "Fiscal Balancing Act," economists Janice Eberly and Phillip Swagel look at ways to balance existing federal commitments with the need to invest in our future, examining a range of short- and long-run policies aimed at creating an environment for broadly-shared income gains, greater competitiveness and social mobility. 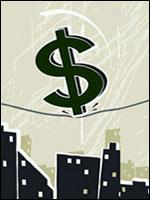 This report was prepared for the Peter G. Peterson Foundation. The statements made and the views expressed are solely those of the authors.