Despite Recent Agreement, A Year of Political Brinksmanship Has Taken a Toll on Voters with Nearly Two-Thirds (66%) Believing the United States is on the Wrong Track in Addressing the National Debt 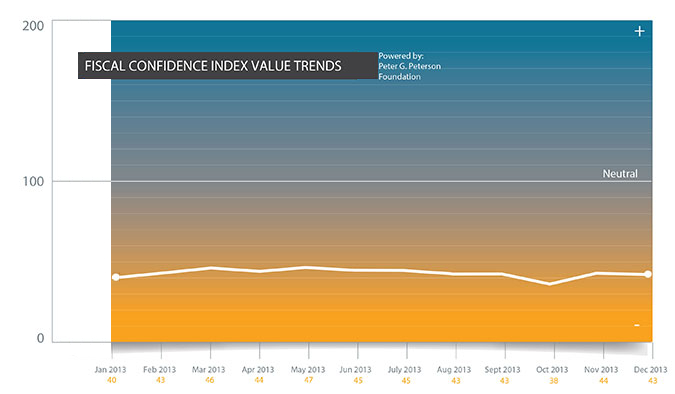 The poll also found that two-thirds of voters now believe the United States is headed on the wrong track, a six-point increase since January 2013, indicating Americans widely reject the short-term approaches favored in Washington throughout the past year.

Michael A. Peterson, President and COO of the Peterson Foundation, said, "After a year of political brinksmanship and a government shutdown, it’s not a surprise that voters remain skeptical about lawmakers’ ability to make progress on the nation’s fiscal issues. Looking to 2014, lawmakers should build on the success of the modest, bipartisan budget agreement, which did not address the drivers of long-term debt but could be a foundation for future collaboration."

The Peter G. Peterson Foundation commissioned the poll by the Global Strategy Group to survey public opinion on the national debt. The nationwide poll included 1,003 U.S. registered voters, surveyed by telephone between December 16 and December 19, 2013. The poll has a margin of error of +/- 3.1%. The poll examined voters’ opinions on the national debt, political leadership, and America’s fiscal and economic health.

Detailed poll results can be found online at: www.pgpf.org/what-we-are-doing/education-and-awareness/fiscal-confidence-index

About the Peter G. Peterson Foundation
The Peter G. Peterson Foundation is a nonprofit, nonpartisan organization established by Pete Peterson — businessman, philanthropist, and former U.S. Secretary of Commerce. The Foundation is dedicated to increasing public awareness of the nature and urgency of key long-term fiscal challenges threatening America's future and to accelerating action on them. To address these challenges successfully, we work to bring Americans together to find and implement sensible, long-term solutions that transcend age, party lines and ideological divides in order to achieve real results. To learn more, please visit www.pgpf.org.