The Co-Chairs of the President’s National Commission on Fiscal Responsibility and Reform, Erskine Bowles and Alan Simpson, released a draft of their recommendations for deficit reduction and debt stabilization on November 10, 2010. This “Chairmen’s Mark” represents the starting point for the 18-member Commission’s efforts to report out a final package of recommendations, which are due December 1.

The U.S. faces serious, long-term structural budget imbalances driven in part by escalating health care costs, increasing longevity, and large demographic shifts. At the same time, the country’s economy is still recovering from the effects of the financial crisis and the “Great Recession”. As the introduction of this draft argues, “The problem is real, the solution is painful, there’s no easy way out, everything must be on the table, and Washington must lead.”

Absent reform, the U.S. will face an unprecedented level of debt of more than twice the size of the economy within 30 years. Our structural imbalances will threaten our standards of living, our ability to attract domestic investment, and our standing in the international community. The plan outlined in the co-chairmen’s draft is ambitious and comprehensive, and puts “everything on the table.” The plan’s recommendations are divided into two parts: those designed to achieve deficit reduction and stabilize the national debt at an affordable level; and those that will improve Social Security‘s financial condition. The deficit reduction section is split further into three parts: discretionary spending cuts (to both defense and non-defense discretionary spending); tax reform; and mandatory budget options (which address both health care and other mandatory spending). View the Co-Chairmen’s proposal here.

Some key highlights from the plan include: 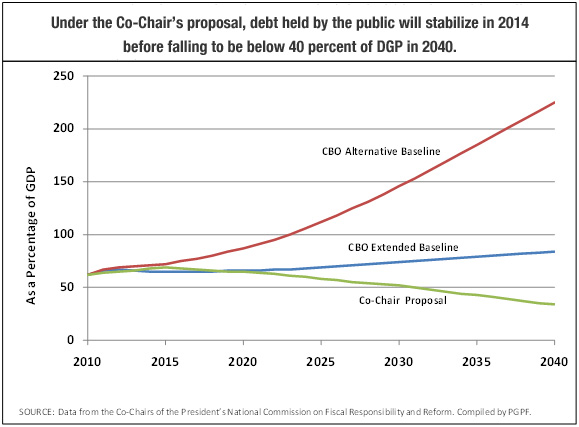