The Congressional Budget Office (CBO) released a new report this week on the Budget and Economic Outlook. CBO reports that the fiscal outlook is dramatically worse than it was last year, primarily due to the fiscally irresponsible tax legislation and budget deal that were recently enacted.

CBO projects that, on our current path, the deficit will reach nearly $1 trillion next year and will total $12.4 trillion over the ten-year period from 2019–2028. Such deficits stem from a structural mismatch between revenues and spending, which grows steadily over time.

Those projections describe a markedly worse fiscal condition than outlined in CBO’s previous report, which was released in June 2017. At the end of 2017, Congress and the President enacted the Tax Cuts and Jobs Act, which will significantly reduce revenues. Then, in early 2018, legislation was enacted that will increase discretionary spending. As a consequence, the budget outlook has changed dramatically for the worse:

CBO’s current law baseline, however, does not account for possible future legislation to continue current policies, which could have material effects on the budget. Such legislation might include extending expiring tax provisions and maintaining current appropriation levels (rather than letting them revert to levels set by law and well below the current limits). Incorporating such policies in its Alternative Fiscal Scenario, CBO estimates that the cumulative deficit over the next decade would be $2.6 trillion above the baseline projections. 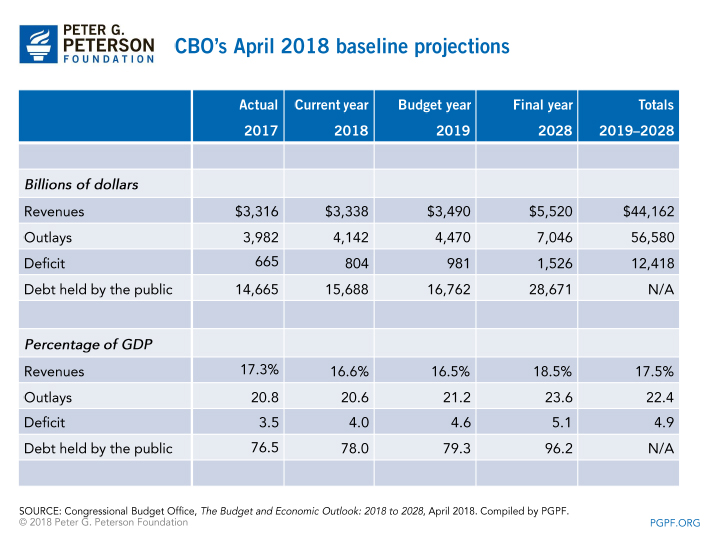 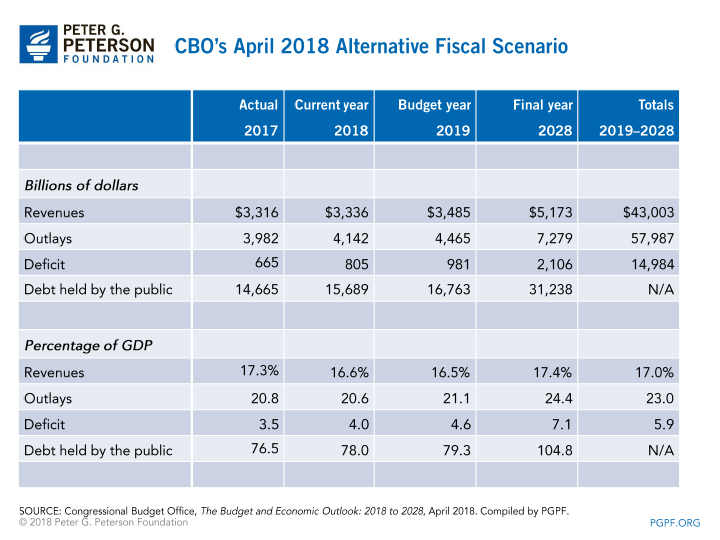 CBO projects that the budget deficit will climb from $804 billion in 2018 to $1.5 trillion in 2028, resulting in a cumulative 10-year deficit of $12 trillion. The overall trend in the deficit is unmistakable—it almost doubles over the next decade. 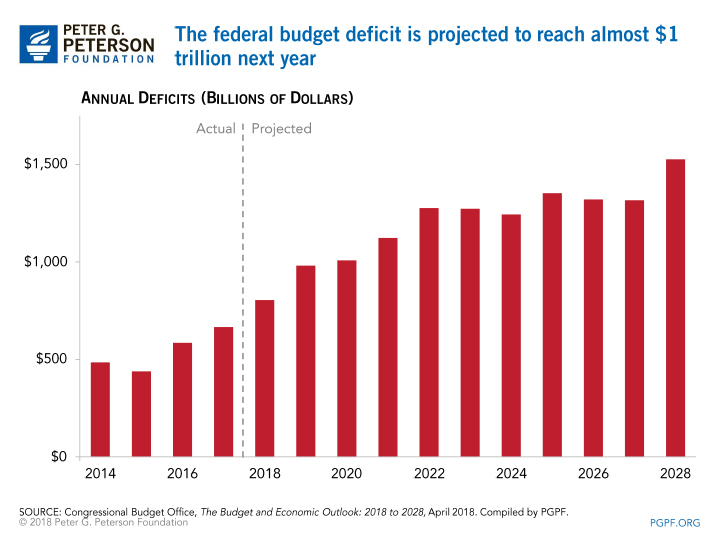 CBO projects that federal debt will reach 96 percent of GDP in 2028, which is historically very high. Since 1940, debt as a percentage of GDP has only exceeded that amount at the end of and immediately after World War II. However, unlike that period and other instances of high debt levels, the budget outlook today is not being driven by temporary factors. The trajectory is much more worrisome because projections show sustained increases in deficits and debt fueled by ongoing structural factors such as the retirement of the baby boom generation, increases in health care costs, and higher interest spending—with an inadequate intake of revenues to cover such commitments. 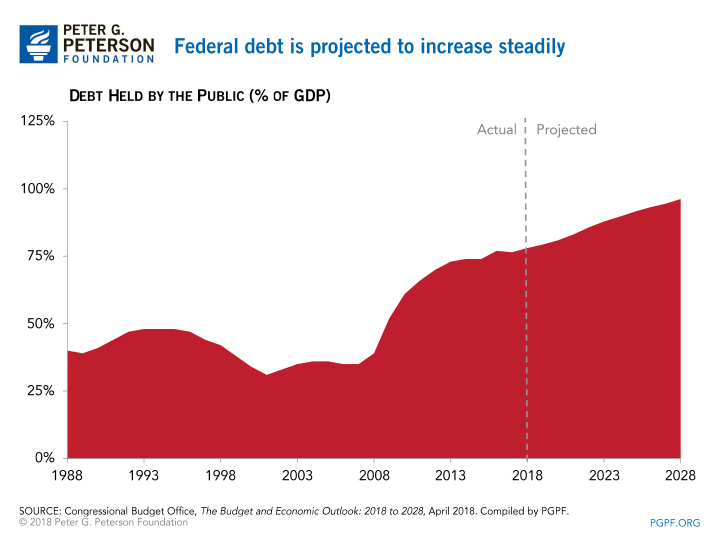 Interest costs: The fastest growing part of the budget

As debt accumulates and interest rates increase, net interest costs are projected to nearly triple over the next decade, increasing from $316 billion in 2018 to $915 billion in 2028. Increased interest costs will crowd out important private and public investments in our future that fuel economic growth, such as infrastructure, R&D, and education. 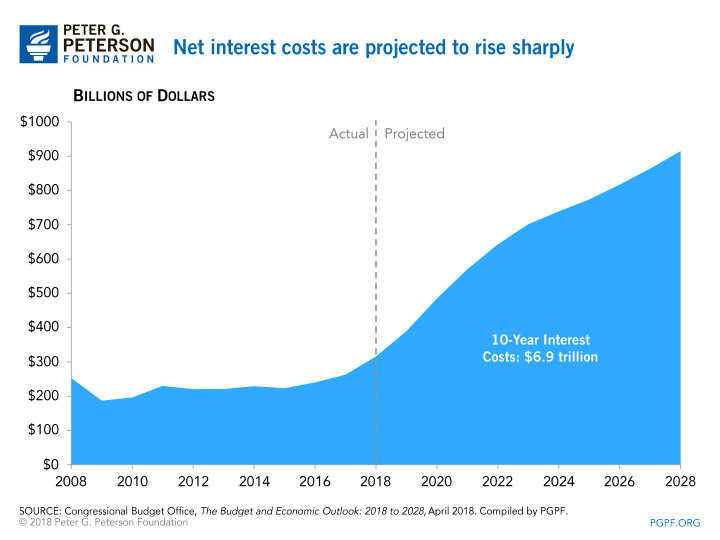 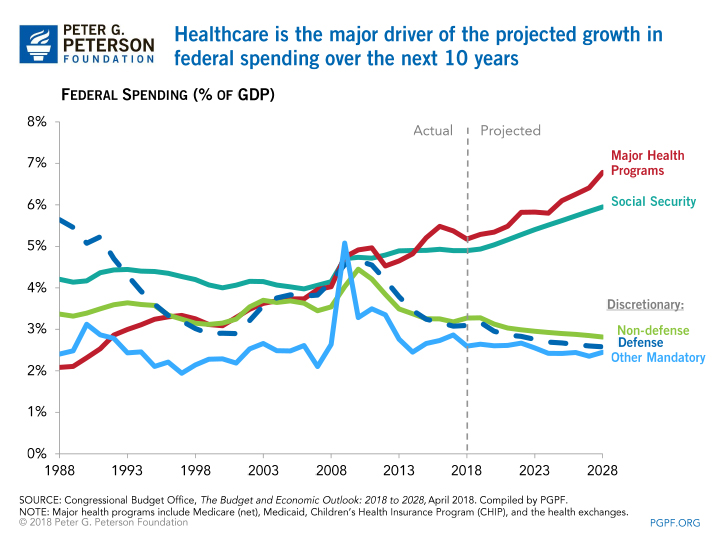 In 2018 and 2019, federal outlays for discretionary programs will increase due to emergency funding provided over the past few months related to natural disasters as well as the increase in the caps of $296 billion provided for those two years in the Bipartisan Budget Act of 2018. In 2020, however, the caps on discretionary spending are assumed to decrease by 10 percent each under current law. Therefore, in CBO’s baseline, combined spending for defense and non-defense purposes would decline relative to the size of the economy— from 6.4 percent of GDP in 2018 to 5.4 percent in 2028. That level of discretionary spending would be historically low — 25 percent below its average over the past 20 years of 7.2 percent of GDP. 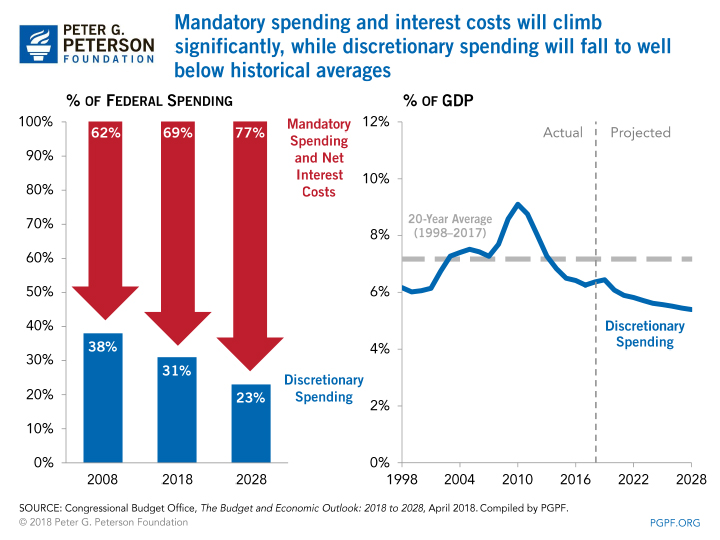 The budget outlook has changed significantly over the past year

For the 2018–2027 period, CBO estimates that the cumulative deficit in the baseline will be $1.6 trillion larger than estimated last year. Projected revenues will be lower by $1.0 trillion, while outlays will be higher by $0.5 trillion. 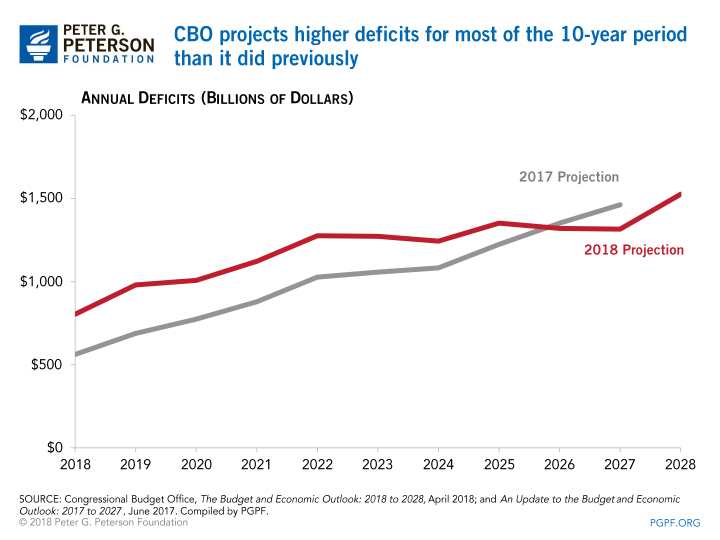 CBO’s baseline projections are constructed under the assumption that current laws will generally remain unchanged. However, some elements of that baseline contain projections that don’t conform to what many observers would consider current policy. For example:

Under CBO’s Alternative Fiscal Scenario, which adjusts those factors, deficits would be $2.6 trillion higher than reported in the baseline. 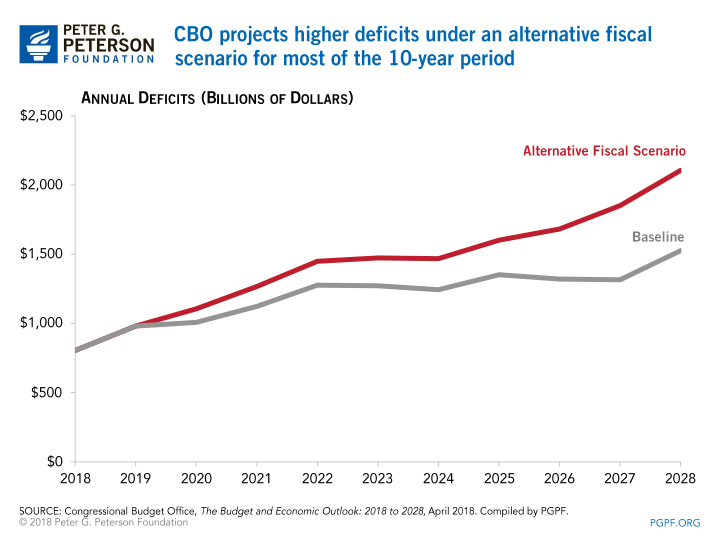 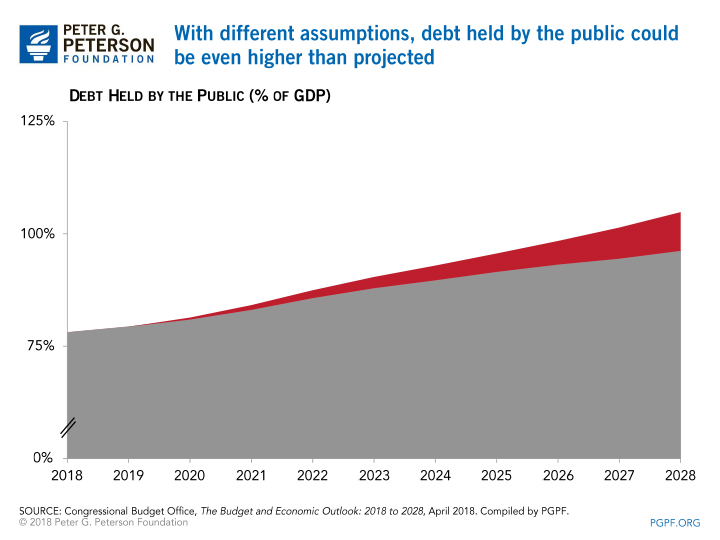 This year’s economic outlook is stronger

Economic forecasts have strengthened since last year. In CBO’s view, The Tax Cuts and Jobs Act has changed incentives to work, save, and invest, which will raise real GDP in the short term; in addition, higher appropriations will also help to boost near-term economic growth. Over the longer term, however, growth will be tempered by greater levels of debt, higher projected interest rates, slightly higher inflation, and lower growth in federal spending. 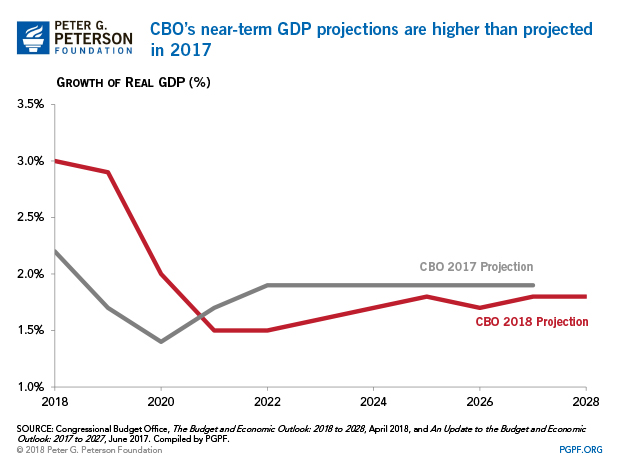 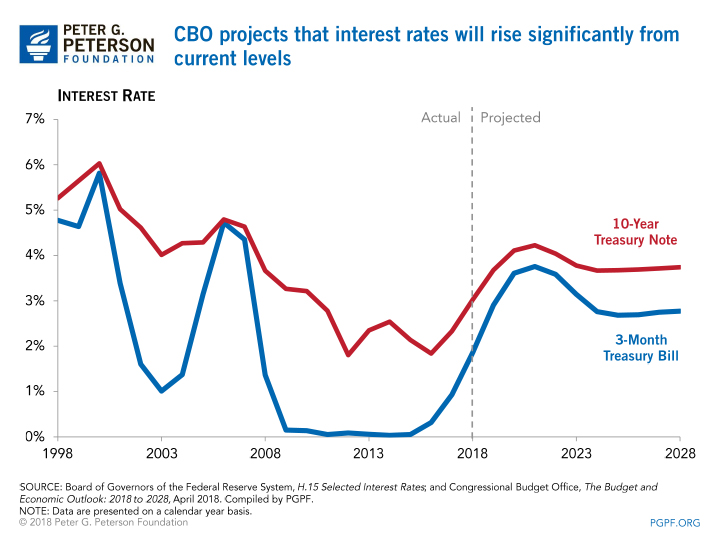 CBO notes that while economic projections are inherently uncertain, the current projections are particularly so. The effects of recent changes in fiscal policy—particularly from the Tax Cuts and Jobs Act—may not be clear for quite a while. In addition, the path of GDP and other economic measures could vary from CBO’s projections. For example, businesses could respond more robustly to the anticipated increase in demand and push GDP growth higher than estimated; conversely, the tight labor market may not generate the increase in wages that CBO incorporates, and therefore restrict economic growth.

The time for policy makers to act is now

Recent legislation on the budget has been fiscally irresponsible and debt is on a path to nearly equal the size of the economy just 10 years from now. CBO warns that if such a path of debt is followed, it “would have serious negative consequences for the budget and the nation.” They offer four concerns on page 6 of the report:

However, we have the ability to reform our budget to achieve the opposite result. By getting our fiscal house in order we can create the conditions that encourage economic growth, enhance business and consumer confidence, and build a prosperous future. Lawmakers have made our fiscal condition significantly worse in recent months, and should correct those failures by enacting sensible reforms that put our nation on a sustainable fiscal path.