Tax Cuts Then and Now: The Debt Is Much Higher 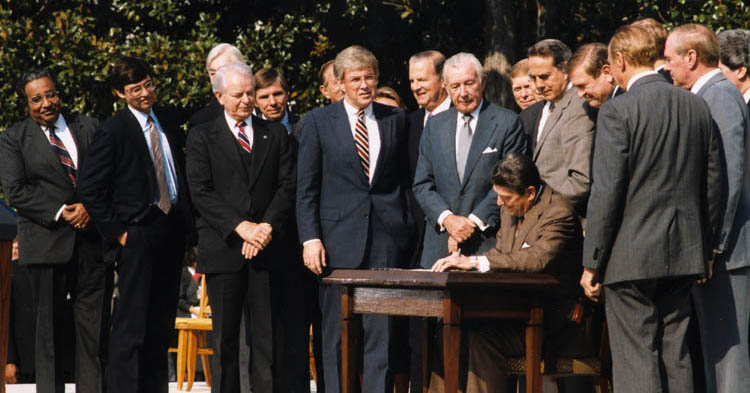 As Congress and the Administration pursue changes to our tax code, it is important to consider the current fiscal environment, and how it compares to earlier eras when large tax packages were enacted. Generally speaking, the United States was in a much stronger fiscal position when lawmakers enacted major tax changes in recent history.

The tax system was last overhauled in 1986, when a bipartisan group of lawmakers reformed and simplified the code. The legislation reduced the number of tax brackets for individuals, lowered tax rates for both individuals and corporations, and closed loopholes. In 1986, the national debt was at 38 percent of GDP — approximately half of what it is today. Moreover, debt was then projected to only rise slightly over the subsequent five years.

In 2001 and 2003, significant tax cuts were enacted, lowering rates across brackets. As in 1986, the fiscal outlook during the time of these tax cuts was much more favorable than it is now. In 2001, the national debt was 31 percent of GDP, and the Congressional Budget Office (CBO) was projecting $5.6 trillion in budget surpluses over 10 years. In 2003, debt had risen somewhat — to around 35 percent of GDP — and the projected 10-year surplus had dropped to $1.3 trillion. However, CBO was still projecting that debt as a percentage of GDP would be significantly lower (14 percent) 10 years in the future.

Unfortunately, the actual situation turned out much differently. Debt is now 77 percent of GDP, and CBO projects that deficits will total $10.1 trillion over the next decade, boosting debt to 91 percent of GDP by 2027. Without any change in legislation, that trend is projected to continue, with debt reaching 150 percent of GDP in 2047. 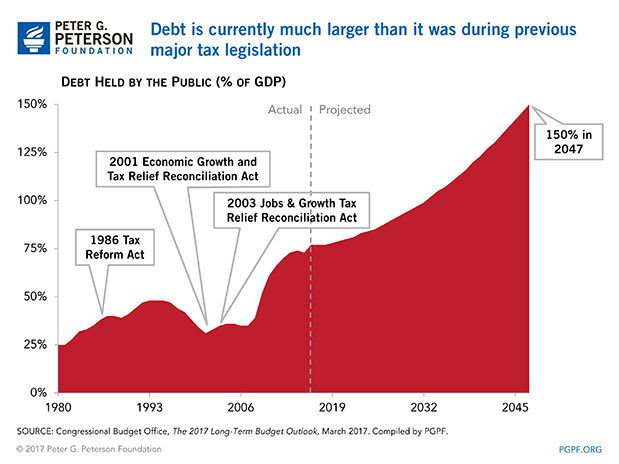 In light of our unsustainable fiscal outlook, reforming taxes in a way that worsens our fiscal condition would be counterproductive and could restrain economic growth in the future. Exacerbating the current large and rising debt can harm our economy by crowding out private investment, squeezing other federal programs, and lowering confidence and certainty. Lawmakers should pursue policies that don’t make our fiscal outlook even worse.