Panelists gather at the 2010 Fiscal Summit, hosted by the Peter G. Peterson Foundation. 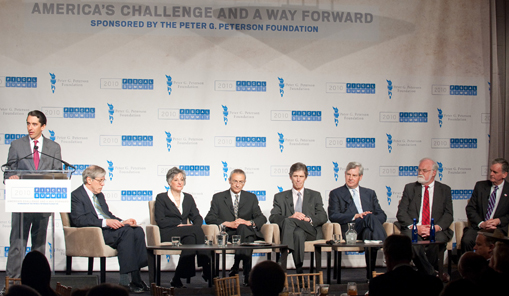 NEW YORK, NY - An unprecedented survey of the most senior economic officials from the last eight administrations and Congressional leaders from the past 30 years shows broad agreement that failure to address the country's long-term structural deficit challenges would lead to another economic crisis within the next ten years. There is also consensus around the solution to the deficit problem: it must include both spending cuts and tax increases, according to a group of more than fifty former top economic officials.

The survey was commissioned by the Peter G. Peterson Foundation (PGPF) as part of its mission to increase public awareness of the nature and urgency of the country's key fiscal challenges and was released in the days leading up to the first meeting of President Obama's National Commission on Fiscal Responsibility and Reform as well as the Foundation's "2010 Fiscal Summit: America's Crisis and A Way Forward." The survey was conducted by Global Strategy Group, a public opinion research firm.

"It is significant to see such an overwhelming proportion of these former senior officials, Republicans and Democrats alike, agree that we must address our long-term structural deficits to avoid another economic crisis, and that we must do so now," said Peter G. Peterson, founder and Chairman of PGPF. "Addressing our fiscal challenges will require being open-minded about solutions and taking a comprehensive approach in which all options are seriously considered. By acting now, we can meet these challenges in a way that secures the vital programs on which so many Americans rely, and ensures that resources will still be available for investments for future growth in areas like education, research and critical infrastructure."

"The opinions of these federal government experts clearly demonstrate that there is a bipartisan consensus that spending cuts and tax increases are both necessary to address our unsustainable structural deficits," said David Walker, President & CEO of PGPF. "Given increasing concerns among Americans, and with this bipartisan consensus of experts in mind, it is time to set aside partisan battles and bridge ideological divides to focus on sensible solutions."

Methodological Note: Global Strategy Group conducted a survey among top economic leaders from the last eight administrations and Congress between April 5 and April 26, 2010. Individuals who are currently serving in public office were not solicited for participation in accordance with the research design. For the purposes of analysis, respondents are assigned a party identification based on their personal affiliation (if an elected official) or by the administration that appointed them.