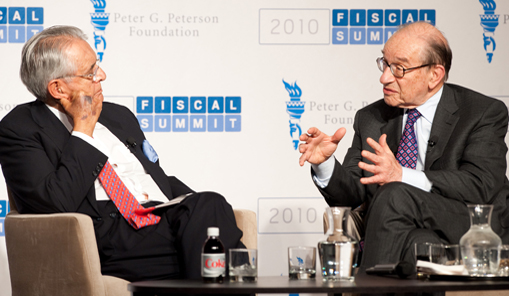 New York, NY, April 28, 2010 — The Peter G. Peterson Foundation (PGPF) today convened a broad range of senior officials, policy-makers, elected leaders, and experts at its first-ever "2010 Fiscal Summit: America’s Crisis and A Way Forward" to launch a national bipartisan dialogue on America’s fiscal challenges. The Fiscal Summit, held the day after the first meeting of the National Commission on Fiscal Responsibility and Reform, brought together hundreds of stakeholders from across the political spectrum with diverse ideas on how to address critical fiscal issues, while continuing to meet the priorities of the American people.

The Fiscal Summit and the first meeting of the National Commission on Fiscal Responsibility and Reform signify a new focus on the unsustainable U.S. debt and long-term deficits, and the impact they will have on our nation’s security, competitiveness, and standard of living. Under current policies, U.S. debt held by the public will reach an unsustainable level of over 300% of GDP by 2040, and interest costs would consume all federal revenues by 2046.

"An extraordinary group of leaders with diverse political views and backgrounds have come together today because they recognize the importance of addressing America’s long-term structural deficits," said Peter G. Peterson, founder and Chairman of the Peter G. Peterson Foundation. "We must take timely action in order to avoid another economic crisis. The challenges our country faces are not insurmountable if we focus on bipartisan solutions that meet the needs of the American people, protect the nation’s social safety nets, and strengthen the nation’s economic future."

Founded in 2008, the non-partisan PGPF is dedicated to raising public awareness about the nation’s key fiscal challenges and bringing Americans together to find enduring solutions that transcend age, party lines and ideological differences. Since its launch, PGPF has invested significantly in grants and projects related to public engagement, financial literacy and the study of fiscal policies and potential solutions.

The survey demonstrates a broad bipartisan consensus among these high ranking economic officials that failure to address the country’s long-term structural deficit challenges would lead to another economic crisis within the next ten years, and economic officials from both parties agreed that the solution to the deficit problem must include both spending cuts and tax increases. The key findings that arise from the Summit today, along with the survey results, will be officially submitted to the National Commission on Fiscal Responsibility and Reform, which will present its recommendations at the end of this year. To view the survey and a complete summary of findings, please visit: www.pgpf.org

Additionally, panels are being moderated by Gwen Ifill of PBS and Robert Reischauer, President of the Urban Institute.

"The broad range of voices here today at the Fiscal Summit and the results of the survey of top economic officials on both sides of the aisle demonstrate a bipartisan understanding that we must begin to address the fiscal challenges that threaten America’s future." said David M. Walker, President & CEO of the Peter G. Peterson Foundation. "What brings us here today is a collective sense of urgency to strengthen our nation’s financial condition and fiscal path, secure our position in the world, and protect the economic futures of our children and grandchildren. We at the Peterson Foundation will continue to raise awareness and engage the public in this critical dialogue, since it is ultimately the American people who have the power to change our nation’s course."

Also today, a landmark effort to engage citizens in fiscal issues and solutions was announced. AmericaSpeaks will hold a series of national town hall style meetings that will bring together thousands of citizens in a discussion on June 26, 2010 in over twenty cities across the country. The demographically and politically diverse groups will hold simultaneous forums that will be linked together by satellite and the Internet. The recommendations made by participating citizens will be shared with policymakers as America’s solutions for a sustainable fiscal future. This timely effort is supported by three leading foundations committed to informing the American public: the Peter G. Peterson Foundation, the John D. and Catherine T. MacArthur Foundation, and the W.K. Kellogg Foundation. More information about AmericaSpeaks is available at www.usabudgetdiscussion.org

The Summit today spotlighted what is now the front-and-center debate in America: how to address our nation’s fiscal challenges. As the nation’s debt levels continue to grow and interest costs explode, the federal government is left with fewer resources to invest in critical areas such as education, defense, environmental protection, research and development. Failing to confront long-term structural deficits could jeopardize the nation’s international competitiveness, threaten the sustainability of our social insurance programs, and result in lower standards of living for future generations. Through lively discussions and analysis, the Summit explored the extent and depth of our nation’s current fiscal challenges, attempts to define the real problems at hand, and began to lay the groundwork for long-term bipartisan solutions.