The Congressional Budget Office (CBO) released its update of the Budget and Economic Outlook on August 19, 2010. At $1.3 trillion — or 9 percent of gross domestic product (GDP) — CBO estimates that the 2010 deficit will be slightly lower than last year’s $1.4 trillion (10 percent of GDP). The updated 2010 projection is a slight improvement over CBO ‘s March estimate primarily as a result of higher than expected corporate revenues and receipts from the Federal Reserve. By 2012, CBO projects that the federal deficit will decline to below half of this year’s level, to about 4 percent (GDP), and drop further to 2 percent of GDP by 2014. However, as deficits persist, CBO projects growing debt levels over the next decade. Under current law, debt is expected to rise from $9.0 trillion this year to $16.1 trillion by 2020. Throughout CBO’s 10-year projection period U.S. debt is expected to exceed 60 percent of GDP, the ceiling allowed by the European Monetary Union. By 2020, CBO project that the debt will be nearly 70 percent of GDP.

CBO’s projections serve as a neutral benchmark for lawmakers to measure the potential impacts of proposed policy. By law, CBO is required to construct budget projections that reflect current law, no matter how likely some provisions are to change. As a result, CBO’s baseline August budget projections may present an overly optimistic perspective about the budget’s future path. For example, the baseline assumes:

The future direction of the economy represents the greatest element of uncertainty about the nation’s fiscal outlook. Compared to other post-recession recoveries, CBO projects that economic growth will remain sluggish and the recovery will progress slowly. Unemployment will remain above 9 percent in 2011 but steadily decline to just below 6 percent by 2014. CBO projects that the economy will grow only 2 percent between the last quarter of 2010 and the end of 2011. GDP growth is projected to average 4.1 percent between 2012-2014. This is compared to the 4.4 percent growth projected in CBO’s January report. Growth will then slow to an annual average of 2.4 percent between 2015-2020. Inflation is projected to remain under 1.7 percent until 2013, and then rise slightly, to average 2.3 percent annually between 2015-2020.

To obtain a better understanding of the budget’s future course, the Peterson Foundation has prepared an alternative budget scenario that includes highly plausible policy changes. Overall, the substantial decline in deficits over the ten-year budget window and the relatively restrained growth in debt held by the public is almost entirely a result of the assumed expiration of the 2001 and 2003 tax cuts. Currently, the debate in Washington about the tax cuts has focused on extending all of the tax cuts or only some of the tax cuts. Congress has routinely passed temporary alternative minimum tax (AMT) relief and patches to the SGR formula to prevent the current law provisions to take effect. PGPF has prepared this alternative scenario to present a more realistic picture of the deteriorating fiscal outlook by incorporating likely policy changes.

In our scenario, primary spending and debt service costs are significantly higher that the CBO baseline. Tax revenues are also significantly lower. We have made the following adjustments: 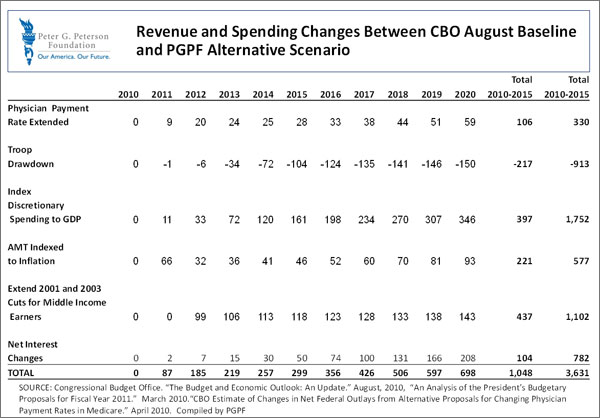 Under PGPF scenario, the cumulative deficit is $3.6 trillion higher over the 10-year period than CBO’s August baseline (See Figure 1). The federal budget deficit would reach 5.9 percent of GDP in 2020, more than twice as large as the deficit under the CBO’s current law baseline assumptions. 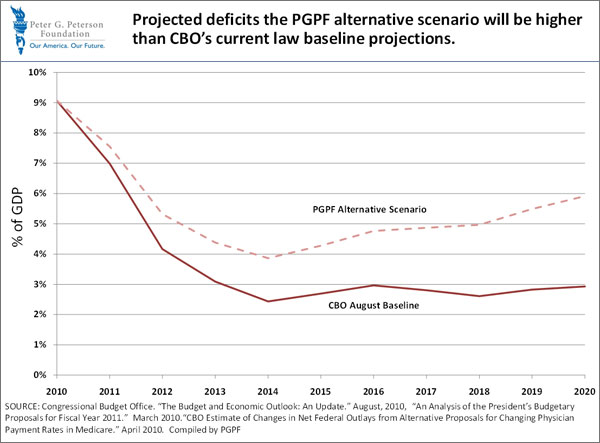 Debt held by the public is projected to increase as the federal government continues to finance deficits with borrowing. Under the alternative scenario, the debt-to-GDP ratio will grow much faster than the CBO baseline— reaching 83 percent of GDP in 2020 (see Figure 3). The interest costs associated with that debt will also grow — exceeding 4 percent of GDP in 2020. 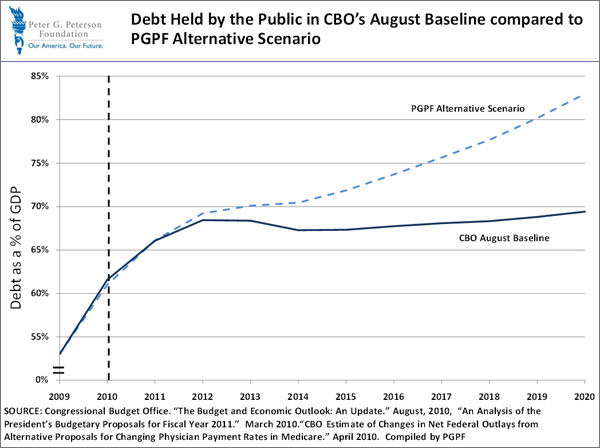 To put this into perspective, the alternative baseline assumes that in 2020 total spending on national defense will be approximately 4.4 percent of GDP. By 2020, interest costs will be greater than spending for Medicare.

Although short-term deficits resulting from the recession help to offset the slow pace of economic activity, the CBO’s August report reveals a permanent and growing mismatch between revenues and spending. Persistent deficit spending and increased borrowing from the public raises the risk that investment in private capital stocks would be "crowded out." Government debt is a relatively safe and desirable place for investors to put their money, but a dollar parked in the Treasury is a dollar unavailable for private investment. With less private investment, productivity could drop, stalling future economic growth. This crowding out effect would place more strain on an already slow economic recovery and lower future standards of living.

PGPF’s alternative scenario represents a more challenging perspective than the current law baseline provided by CBO. Our assumptions incorporate likely changes to revenue and spending policies. Under our assumptions, deficits will be larger and debt held by the public will grow faster than under the current law baseline. The cost of servicing these debts will continue to grow as a portion of the federal budget placing more pressure on an already strained budget process.

Both the CBO’s current law baseline and the PGPF alternative scenario underscore the long -term structural imbalance of the federal budget. Once the economy recovers, reforms that would place the budget on a sustainable path are needed to address this imbalance and improve the future outlook for the budget and the overall economy.