The Congressional Budget Office (CBO) recently published an update of its long-term outlook for the budget and concluded that the federal budget will continue to face intense pressures from the aging of the population and growth in health care costs. These pressures will push up spending on Social Security, Medicare and Medicaid. If taxes are not increased or spending is not cut, CBO projects that interest costs will climb and federal debt will grow to levels that will damage our economy. CBO’s views about the long-term outlook have not changed much from last year.

To illustrate the uncertainty of the projections, CBO presents two scenarios. One is the extended-baseline scenario, which projects spending and revenue if Congress follows current laws allowing most tax cuts to expire, the Alternative Minimum Tax to cover more middle-class households, and automatic reductions to payment rates to doctors that accept Medicare to take effect. That scenario is optimistic since policymakers have extended the 2001/2003 tax cuts until the end of 2012, repeatedly passed temporary measures to limit the number of additional taxpayers subject to the AMT, and routinely changed the law to prevent the reductions in doctor reimbursement rates from taking effect. CBO prepared a second scenario assuming that most tax cuts currently scheduled to expire are extended, the alternative minimum tax is indexed to inflation, physician payments are not cut, and that the cost controls in the Affordable Care Act are not maintained. 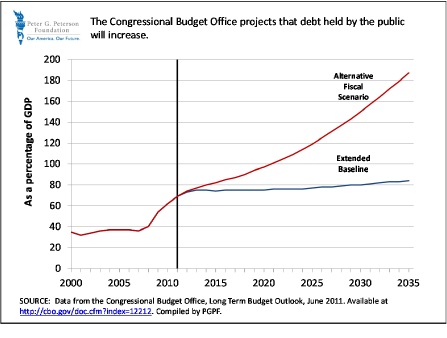 Under the scenario with most realistic assumptions (the Alternative Fiscal Scenario): 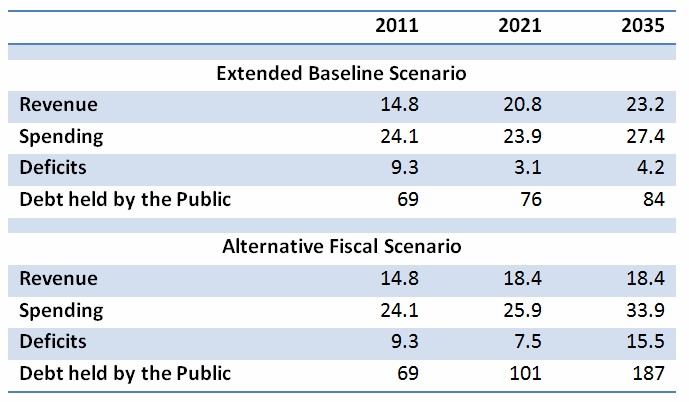 CBO’s long-term outlook is based on a benchmark set of economic projections for output, interest rates, wages, and other aspects of the economy. This set of benchmarks provides a stable foundation for alternative policy scenarios, and does not take into account the negative effects that large deficits and accumulating debt are likely to have on economic growth. 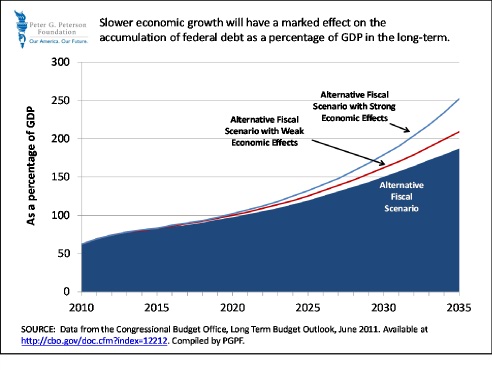 Furthermore, the potential economic effects could be even greater than CBO estimates because their numbers do not reflect the fact that growing deficits and debt could increase the risk that foreign lenders will lose confidence in America's ability to pay back its debt. If the United States faced a debt crisis, interest rates would shoot up, forcing policy makers to choose between sudden increases in taxes, sharp reductions in spending, or a vicious spiral of even larger deficits, interest costs, and debt.

Medicare, Medicaid, Children’s Health Insurance Program (CHIP), and the exchange subsidies created by the Affordable Care Act are the four major health spending programs. CBO projects that under current law, the total cost of these programs will increase from 5.6 percent of GDP in 2011 to 9.4 percent of GDP in 2035. The growth in federal health care costs has two main causes: the share of the population over 65 is rising, and health care costs are growing faster than the economy. Current law limits the growth of some Medicare payment rates, and the alternative fiscal scenario assumes that those limits are not maintained by Congress. The Affordable Care Act holds the payment rate updates for many Medicare providers below the rate of inflation and creates a trigger mechanism to hold cost growth down. The impact of these policies would be to bring the real growth rate of Medicare costs per beneficiary down to 2 percent despite a historical growth rate of 4 percent. CBO’s alternative fiscal scenario projects that the Affordable Care Act tempers health care cost growth in the short-term, but does not keep health care cost growth at a sustainable pace beyond 2030. Under that scenario, federal health care spending would rise to 10.3 percent of GDP in 2035, one percentage point higher than under the extended-baseline scenario.

CBO’s extended baseline scenario shows that if Congress and the President refrain from extending the 2001 and 2003 tax cuts, revenues will grow to 23.2 percent of GDP in 2035, significantly above the average over the last 40 years of 18 percent, and above the alternative fiscal scenario projection of 18.4 percent. In the alternative fiscal scenario most of the income tax cuts will be extended permanently beyond 2012, and the Alternative Minimum Tax exemption will be indexed for inflation. After 2021, CBO assumes that Congress will pass and the President will sign into law further tax changes to prevent revenues from increasing as a share of GDP. If taxes are allowed to grow as scheduled and other policies such as reimbursement reductions to doctors in the Medicare program are allowed to take place, the budget would be on a much more sustainable path.

The Congressional Budget Office’s Long-Term Budget Outlook is a warning that the nation’s current policy path is unsustainable. As the Baby-Boomers reach retirement age, the aging of the population and the demands that these retirees will place on the entitlement programs will place considerable strain on the nation’s finances. The increased borrowing required to meet our current obligations may result in significantly lower growth in future. To keep deficits and debts from reaching unsustainable levels, revenues will have to increase substantially, spending will have to be cut substantially, or some combination of revenue increases and spending decreases will have to be enacted.

iiCBO defines excess health care cost growth as cost growth per enrollee, adjusted for changes in the age profile of the population, that grows faster than GDP per capita