The Congressional Budget Office’s (CBO) Preliminary Analysis of the President’s FY 2012 Budget released on Friday is further indication that the nation continues to face serious long-term fiscal challenges. Under the President’s proposed budget, CBO estimates that by 2021:

These projections provide fresh evidence that the nation’s fiscal policy is on an unsustainable course and changes in policy will be needed. Failing to address these budgetary imbalances will eventually harm the economy: international evidence suggests that countries with government debts above 90 percent of GDP grow more slowly.

The CBO issues its analysis of the President’s budget annually to help the Congress prepare the fiscal year budget. The report compares the CBO’s projections of the budget under current law and under the President’s policies. The CBO is a nonpartisan and independent agency of the Congress.

WHAT IS THE OUTLOOK FOR DEBT AND DEFICITS?

In its latest analysis, the CBO projects that deficits under the President’s budget will remain stubbornly high over the next decade. Although deficits are projected to decline from 9.5 percent of GDP in 2011, they do not fall below 4.1 percent of GDP at any point during the next 10 years. Moreover, after four years of improvement, deficits begin to creep back up and reach 4.9 percent of GDP in 2021.

By contrast, if policymakers simply maintained current law and did not make any additional changes to the nation’s budget policies (beyond what is already scheduled in law), the deficit would stabilize at about 3 percent over the next ten years. Under current law, the tax cuts that were enacted in 2001 and 2003 (and temporarily extended in 2010) would expire in 2012. 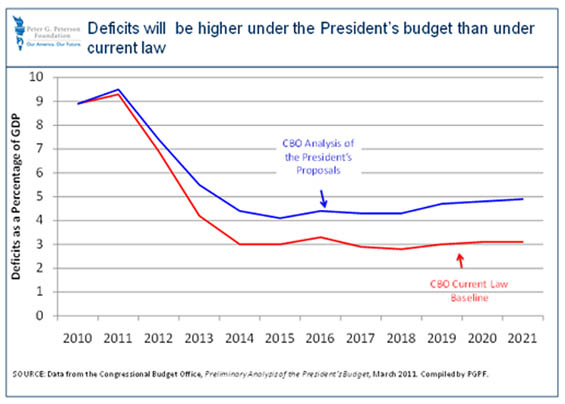 Under the President’s budget, the CBO projects that the federal debt will climb steadily over the decade and eventually reach 87 percent of GDP in 2021. By contrast, if policymakers simply maintained current law, the CBO projects that the debt would stabilize at about 75 percent of GDP over the next 10 years. Although the CBO’s analysis is limited to 10 years, the President’s budget documents show that debt would continue to grow in the following decades. 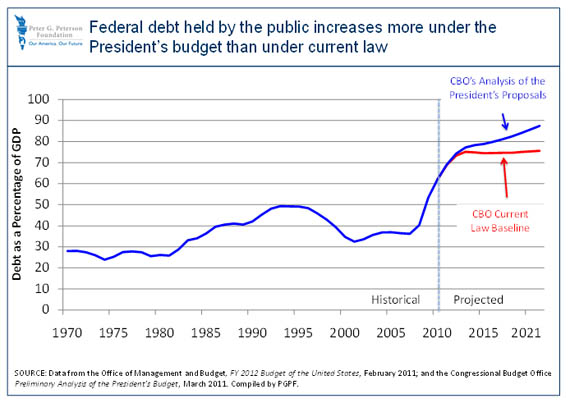 The Administration estimates that federal debt under the President’s policies would stabilize at 77 percent of GDP over the next 10 years. By contrast, the CBO does not expect debt to stabilize under the President’s policies. Although a full accounting of the differences will not be available until the CBO publishes its final analysis of the President’s budget next month, the differences likely stem from the fact that the CBO does not assume that the economy recovers as quickly as the Administration does. The CBO also makes different technical assumptions that can influence projections of the budgetary costs of President’s various initiatives.

WHY DOES THE DEBT INCREASE?

The President’s budget proposes a substantial reduction in taxes relative to current law, and those tax cuts are the main reason why federal debt climbs over the next 10 years. By the CBO’s calculations, the Administration’s tax policies will reduce revenues by $2.3 trillion from 2012 to 2021. 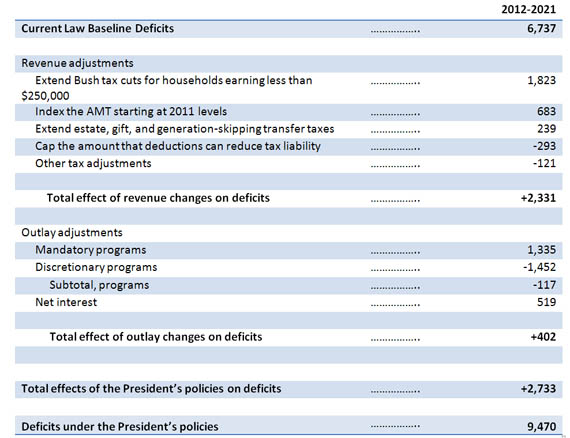 Because of those tax cuts, the federal government will need to borrow more, which will significantly raise the burden of servicing the nation’s debt. According to the CBO, net interest payments on the federal debt will quadruple in nominal dollars over the next 10 years—growing from $260 billion in 2012 to $931 billion in 2021. Interest costs also will absorb a bigger share of total spending: net interest on the federal debt is projected to rise from 7 percent of total spending in 2012 to 16 percent in 2021. 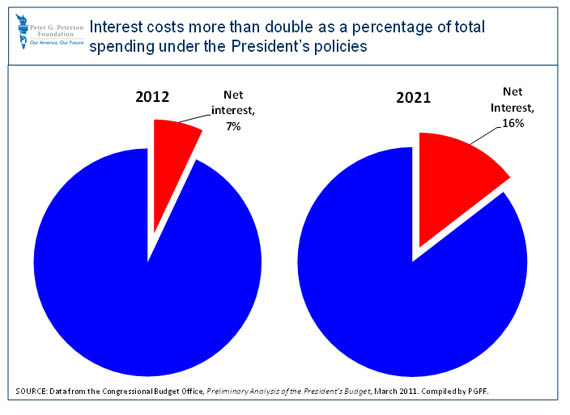 In assessing the relative riskiness of debt, credit analysts tend to look at interest costs as a share of revenues. The CBO estimates that interest costs under the President’s budget will be 10 percent of federal revenues this year, which is well above the levels seen in several other AAA-rated countries. More worrisome, the CBO projects that interest costs will grow to more than 18 percent of revenues in 2018―just seven years from now. Some credit analysts believe that if interest costs were to reach that level, the United States could risk losing its AAA status. A ratings downgrade would make Treasury bonds and notes less attractive to investors and likely result in higher interest rates.

The most significant revenue policies in the President’s budget are:

The permanent extension of the tax cuts (and the other provisions in the first bullet) represents the largest contributor to future deficits in the President’s budget. By the CBO’s estimates, it accounts for more than 75 percent of the total change in projected revenues over the next 10 years.

WHAT ARE THE LONG-RUN IMPLICATIONS?

National leaders from both political parties have drawn attention to the significant long-term budgetary challenges that the United States continues to confront. In the message accompanying his 2012 Budget, President Obama warned that “the fiscal realities we face require hard choices.” House Speaker Boehner has called for an “honest dialogue about the debt crisis we face” and Senate Majority Leader Reid has said that “we need to start making tough decisions in order to achieve lasting solutions.”

The CBO report confirms that we need to go beyond the policies outlined in the President’s budget in order to address our longer- term debt and deficits. The CBO projects that under the President’s policies, by 2021federal debt will climb to almost 90 percent of GDP. Without a change to current policies, debt is expected to grow even further.

The leading edge of the baby-boom generation turns 65 this year. Over the next decade and beyond, spending pressures on Social Security, Medicare and Medicaid will begin to mount, yet revenues will not keep pace. Failing to address the gap between spending and revenues could do great harm to our families, our businesses, and our economy in the years ahead.

Although any action on the budget must recognize the fragility of the current state of the economy, policymakers could significantly improve the outlook for the budget and economy by creating a credible plan to reduce the deficit gradually over time as the economy recovers.