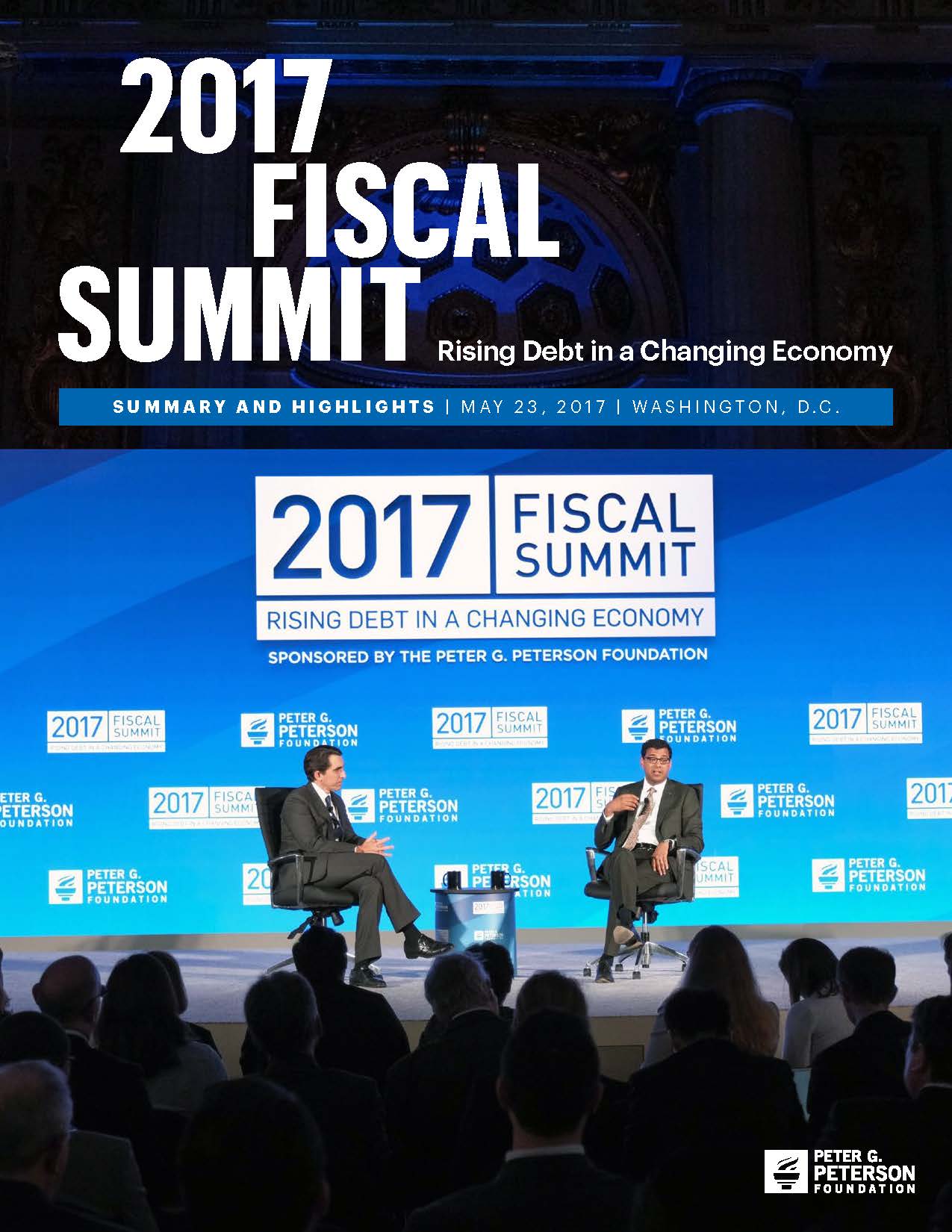 America faces the dynamic combination of an evolving economy, a crowded legislative agenda, and an unsustainable fiscal outlook. As Congress and a new administration explore major changes in key areas — healthcare, taxes, infrastructure, trade, and more — our fiscal condition remains as important as ever.

With many reforms on the table, one issue impacts all the others: our unsustainable national debt. America’s fiscal outlook is connected to all these issues because our growing debt threatens our economy and weakens our ability to address our most important budget priorities.

The 2017 Fiscal Summit convened leading voices and policymakers from across the political spectrum to discuss the legislative agenda, its connection to our growing national debt, and solutions to put us on a better path.

The Summit brought together top policymakers and thought leaders to discuss the significant fiscal implications of current reform proposals, and examined the opportunities that exist to ensure policy solutions are sustainable, fiscally responsible, and supportive of economic growth.

Adding to the day’s significance, the Summit coincided with the release of the Trump administration’s 2018 budget. A number of panelists, including leading members of the administration and Congress, gave their first public statements on the budget from the stage, offering real-time reactions and analysis.

You can download the summary book in its entirety or browse below to download summaries or watch videos of specific presentations.

In a series of one-on-one interviews, House and Senate Congressional leaders will explore the connection between America’s rising national debt and a crowded legislative agenda. The major areas of reform – including healthcare reform, tax reform, infrastructure, trade and more – all have significant fiscal implications. These timely conversations will center on ways to craft policy solutions that are both fiscally responsible and supportive of economic growth.

Getting to Yes: Finding Consensus in a Divided Congress

In a polarized, highly-partisan Congress, fierce ideological battles often prevent cooperation and compromise. However, bipartisan solutions are often the key to breaking legislative gridlock and achieving lasting reform. In this conversation, Rep. Charlie Dent (R-PA), co-chair of the Tuesday Group, and Rep. Jim Himes (D-CT), chair of the New Democrat Coalition, will assess the political and electoral forces shaping today’s policy environment, the vast “middle” of American politics, and the possibilities that exist to find consensus in a shifting landscape.

Read the summary | Watch the video

The White House recently released a blueprint outlining President Trump’s tax reform plan. In this one-on-one conversation, Treasury Secretary Mnuchin will discuss the goals and principles underlying that plan, addressing key details such as target rates for corporations and individuals, how tax expenditures will be treated, and the effect on economic growth and the nation’s fiscal condition.

Today’s global security challenges demand American leadership. However, our country's safety, strength and international influence are built on our nation’s fiscal and economic health. Our elected officials face tough choices in maintaining the economic growth that underlies our security, while assessing the challenges of the moment and the technological possibilities of the future. Admiral Mike Mullen, former chairman of the Joint Chiefs of Staff, will draw from his considerable experience to explore how our nation can maintain global economic and diplomatic leadership that is both sustainable and sufficient to the challenges we face.

UP TO US: ENGAGING THE NEXT GENERATION

Up to Us is a nonpartisan, grassroots initiative that engages students on campuses across the country in a competition to raise awareness among their peers about the nation’s fiscal future and the economic opportunities the next generation will inherit. Michael Peterson will recognize this year’s winning team from Jackson State University.

Read the summary | Watch the video

GROWTH AND FISCAL SUSTAINABILITY IN A CHANGING ECONOMY

A growing, thriving economy is a critical part of stabilizing our nation’s long-term fiscal imbalance. And stabilizing our increasing national debt is a critical part of achieving long-run economic growth. How do we balance these interacting priorities to generate successful and sustainable fiscal and economic health for America? How much growth is really possible? How does our rising national debt threaten the economy? What can policymakers do to generate sustainable growth that creates widely-shared economic opportunity for all Americans? President and CEO of Business Roundtable Josh Bolten, former Chairman of the Council of Economic Advisers Jason Furman, and New Orleans Mayor Mitch Landrieu will assess the current state of America’s economic engine, and describe policies that will bolster innovation, sustainability and competitiveness in a changing economy.

Read the summary | Watch the panel

A Conversation with Atul Gawande

Even in a highly polarized Congress, there is broad support for reforming the U.S. tax code. Tax reform done right would promote economic growth, reduce complexity, increase transparency and fairness, and improve the nation’s fiscal outlook. Yet getting major tax reform across a goal line has always been elusive. Wall Street Journal tax policy reporter Richard Rubin will lead back-to-back conversations with Chairman of the House Ways and Means Committee Kevin Brady (R-TX) and House Democratic Whip Steny Hoyer (D-MD) on goals for tax reform legislation, the specific proposals under discussion, and how to overcome deeply entrenched interests across the economy.

Improving our healthcare system to deliver better quality care at lower cost is critically important to our nation’s long-term economic and fiscal well-being. Healthcare represents 70 percent of the future growth in entitlement spending, so there’s no viable solution to our debt problem that does not include healthcare reform. Healthcare is also a key economic issue that affects wages, competitiveness, and opportunity, given that the U.S. spends twice as much on healthcare as other advanced nations – often with outcomes that are no better. In this timely conversation, three renowned healthcare experts will discuss the current prospects for healthcare reform in Congress, but also how innovations in delivery reform, payment reform and data transparency can lead to better health outcomes at lower cost.

Read the summary | Watch the panel