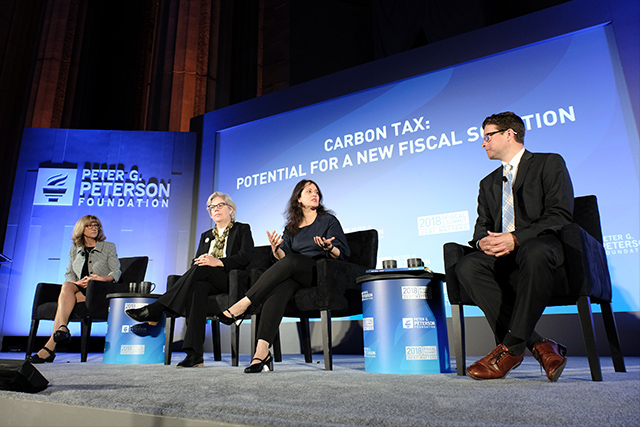 At lunch, New York Times tax and economics reporter Jim Tankersley welcomed a panel of experts to discuss the potential for a well-designed carbon tax to play a role in putting our nation on a more sustainable ﬁscal path.

Tankersley was joined by two experts from diﬀerent sides of the political aisle who have written extensively on the beneﬁts of a carbon tax: Aparna Mathur, Resident Scholar in Economic Policy, American Enterprise Institute, and Adele Morris, Senior Fellow and Policy Director of Climate and Energy Economics Project, Brookings Institution. Terry Dinan, Senior Advisor, Congressional Budget Oﬃce (CBO), rounded out the panel to provide a non-partisan analysis on the ﬁscal and economic eﬀects of legislative proposals to tax carbon emissions.

Morris and Mather outlined their view that a carbon tax holds unique potential not only to discourage the use of carbon-intensive energy, but also to beneﬁt both our ﬁscal and economic condition. Morris said that a carbon tax is “one of the few taxes that we can contemplate that would provide net beneﬁts to the economy, as well as a substantial revenue source.” Mather noted that implementation of a tax is also administratively easy, saying that “you don’t have a huge set of regulatory mechanisms required.”

Weighing in on potential revenue levels that could result from a new carbon tax, Dinan said, “In 2016, CBO looked at the eﬀects of a carbon tax that would start at $25 a ton, in-crease at a real rate of 2 percent annually, and we estimated that that would raise a little less than a trillion dollars over its initial 10 years. So that’s a signiﬁcant amount of revenue.”

Tankersly noted that many experts have raised a concern about distributional eﬀects of a carbon tax. Dinan said, “most researchers do tend to ﬁnd that the carbon tax is at least somewhat regressive. But the degree of regressivity varies greatly across studies, depending on assumptions you make about whether it is passed forwards or backwards.”

Mather referred to joint research she conducted with fellow panelist Morris on methods to oﬀset regressivity in a carbon tax. “There are ways to design a carbon tax that you could actually return some of those revenues back to the lowest income households,” she said. “Adele [Morris] and I did an analysis, and we said you could be generating about $100 to $150 billion a year, and if you could return even 10 percent of that back to the bottom 20 percent of households, they would be as well oﬀ as they were before a tax.” Morris agreed, adding that it’s important to look at the distributional eﬀects of inaction, “because there are distributional outcomes of climatic disruption, and the damages associated with extreme weather events and other outcomes that would be mitigated by this tax.”

The panel noted that evaluating the eﬀect of a carbon tax on the economy depends signiﬁcantly on how the resultant revenue is used. Dinan said that our existing national debt “has real cost consequences for the economy, slowing savings and investment, reducing future output, and causing a rising interest cost to put pressure on the budget. … So using the revenue from a carbon tax to reduce deﬁcits and ultimately lower the debt in turn, would reduce the cost that that debt would impose on the economy.”

Acknowledging political obstacles to instituting a new tax, Morris pointed to using newly created revenues strategically “to manage diﬀerent stakeholder concerns.” She advocated for a combination approach, “where you’ve got some debt reduction, … you have some targeting to lower-income households, maybe you have some other tax reductions. I think that is the conversation we should be having.”